Hoan Nghenh Tinh Than [The liberation of Hanoi in October 1954] 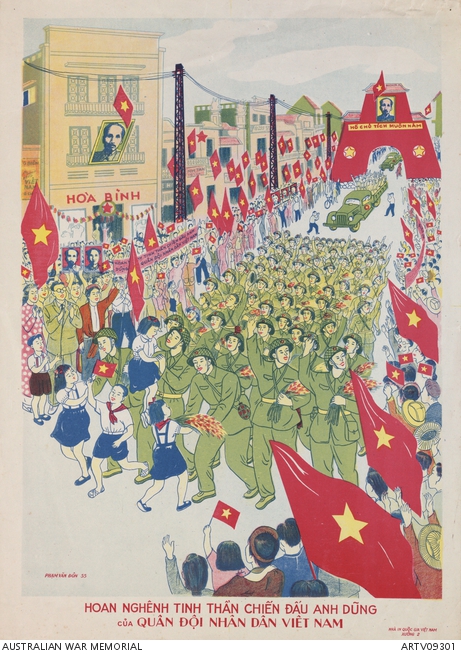 Poster depicting a large number of soldiers, members of the 'People's Army' marching or driving through a crowded street in Hanoi in October 1954. The street is lined with people waving a red flag with a yellow flag on it, the flag of the Democratic Republic of Vietnam (North Vietnam) . This flag was adopted in 1950s, with the five points of the star representing the farmers, workers, intellectuals, youth and soldiers in Vietnam. Appearing on the facade of a building on the left of the poster is a portrait of Ho Chi Minh. In October 1954, following the French departure from Hanoi, Ho Chi Minh returned after spending eight years hiding in the jungle and formally takes control of North Vietnam. The artist for this poster, Pham Van Don was a born in 1918. He was a graduate of the art school, l'Ecole des beaux-artes d'indochine, Hanoi in 1944. During the 1950s and 60s in Vietnam, poster artists often worked in a social-realist style promoted by the state, with art serving propaganda purposes. The most important and patriotic subject matter in posters was realistic portraits of peasants, workers and soldiers. Ho Chi Minh, in particular, felt that art must 'speak to the masses' and artists took on a new role, fighting in the struggle for independence and national liberation. The posters were important in an ideological campaign that sought to promote a high regard for labour, collectivism and patriotism, during a period of socialist transformation and cultural revolution in Vietnam.