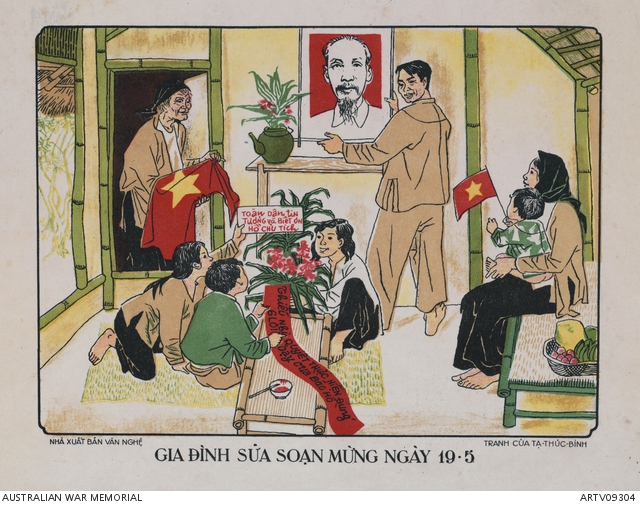 Poster depicting a family inside their home; the father adjusts a portrait of Ho Chi Minh on the wall; the mother holds a small child and a North Vietnamese flag; the grandmother entering the doorway also holds a North Vietnamese flag. The children in the forground are writing and reading some placards. The text on these relates to encouraging the children to follow Ho Chi Minh's system and asks the people to support and be grateful for Ho Chi Minh. During the 1950s and 60s in Vietnam, poster artists often worked in a social-realist style promoted by the state, with art serving propaganda purposes. The most important and patriotic subject matter in posters was realistic portraits of peasants, workers and soldiers. Ho Chi Minh, in particular, felt that art must 'speak to the masses' and artists took on a new role, fighting in the struggle for independence and national liberation. The posters were important in an ideological campaign that sought to promote a high regard for labour, collectivism and patriotism, during a period of socialist transformation and cultural revolution in Vietnam.