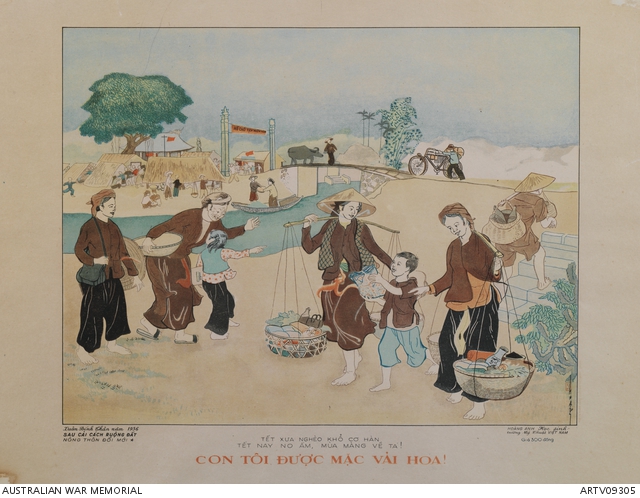 Poster depicts men, women and children in the foreground carrying baskets of clothes. In the background is a village, river and bridge. The poster was produced for the Year of the Monkey, 1956 and translation of the accompanying text is 'My child is able to wear floral dresses!/ In the old days we lived in poverty but today at Lunar New Year Festival we have enough food and clothes and the crops belong to us'. The text printed on the lower left below the image refers to the Land Reforms and Spring 1956, while pale cream text horizontally on the left refers to the production of the poster and printing by the house of the National Bank in 1956. During the 1950s and 60s in Vietnam, poster artists often worked in a social-realist style promoted by the state, with art serving propaganda purposes. The most important and patriotic subject matter in posters was realistic portraits of peasants, workers and soldiers. Ho Chi Minh, in particular, felt that art must 'speak to the masses' and artists took on a new role, fighting in the struggle for independence and national liberation. The posters were important in an ideological campaign that sought to promote a high regard for labour, collectivism and patriotism, during a period of socialist transformation and cultural revolution in Vietnam.