Thua bac nam nay duoc mua [Uncle President, this year the harvest is a bumper one] 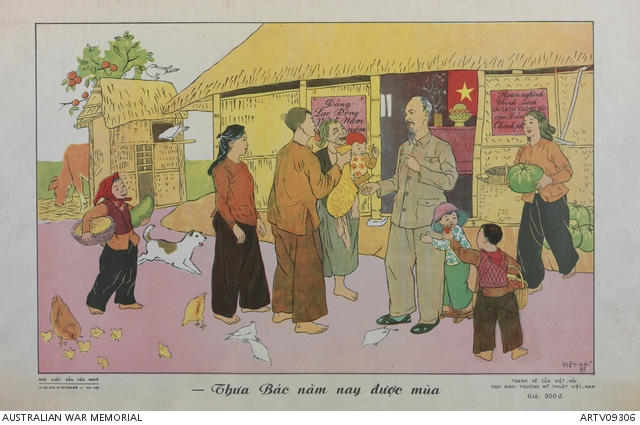 Poster depicting a peasant family standing outside their hut with 'Uncle Ho', Ho Chi Minh. The translation of the accompanying text is; 'Uncle President, this year the harvest is a bumper one'. A North Vietnamese flag, red with a yellow star, can be seen hanging in the family's hut. During the 1950s and 60s in Vietnam, poster artists often worked in a social-realist style promoted by the state, with art serving propaganda purposes.The image for the poster was produced by an art student who had studied at the School of Fine Arts in Hanoi. The most important and patriotic subject matter in posters was realistic portraits of peasants, workers and soldiers. Ho Chi Minh, in particular, felt that art must 'speak to the masses' and artists took on a new role, fighting in the struggle for independence and national liberation. The posters were important in an ideological campaign that sought to promote a high regard for labour, collectivism and patriotism, during a period of socialist transformation and cultural revolution in Vietnam.