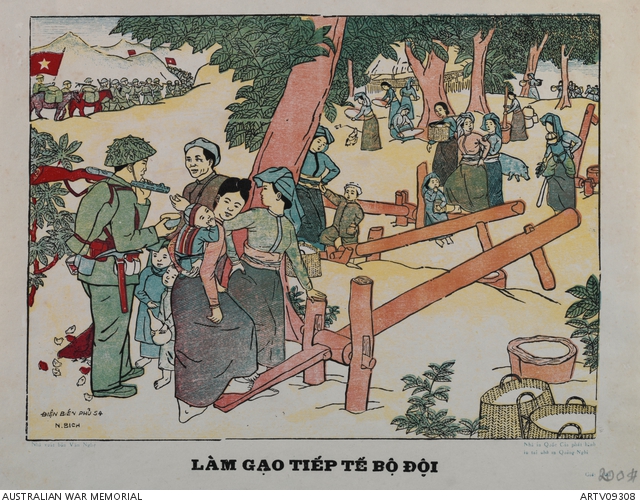 Poster depicting peasant women and men walking through forests carrying baskets of rice. A group of people stops to converse with a soldier in uniform, while others are in the background, marching and carrying red North Vietnamese flags. The accompanying text translates as; 'Producing rice to supply the Army men'. During the 1950s and 60s in Vietnam, poster artists often worked in a social-realist style promoted by the state, with art serving propaganda purposes. The most important and patriotic subject matter in posters was realistic portraits of peasants, workers and soldiers. Ho Chi Minh, in particular, felt that art must 'speak to the masses' and artists took on a new role, fighting in the struggle for independence and national liberation. The posters were important in an ideological campaign that sought to promote a high regard for labour, collectivism and patriotism, during a period of socialist transformation and cultural revolution in Vietnam. Many poster artists during this period were encouraged to draw the ethnic minorities living in the highland areas bordering Loas and China. All Vietnamese citizens were to take equal part in the movement for independence.