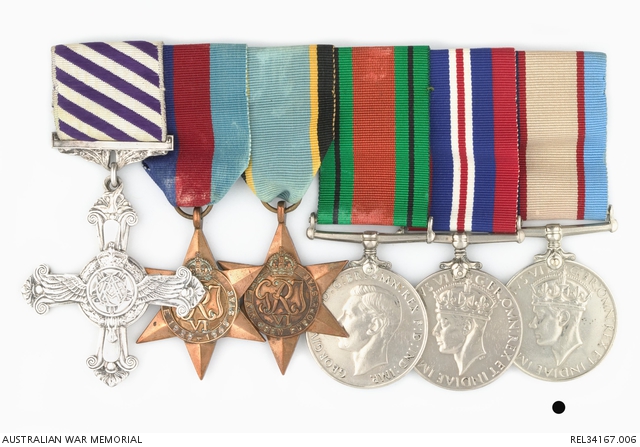 Related to the service of 413717 Pilot Officer Neil Allason Lambell of Gulargambone, NSW, a grazier, born at Greenwich NSW on 27 January 1922. Lambell enlisted on 12 December 1941 and trained as a bombardier in Australia on Avro Ansons and Fairey Battles at Somers, Mt Gambier, Sale and Parkes before embarking for overseas service from Sydney on 24 August 1942. After three month's training at 27 Operational Training Unit, Lichfield on Vickers Wellington bombers, Lambell was given just one hour's conversion training on Avro Lancasters at 1662 Conversion Unit, Blyton in April 1943 before being posted to an operational unit, 103 Squadron, RAF, at Elsham Wolds on 2 October 1943, where he flew with C Flight. His crew remained consistent from this posting and included, apart from Lambell, Flying Officer Gomer S (Taft) Morgan DFC, RAF pilot and commander; Sergeant (Sgt) J R (Jock) Mearns RAF, flight engineer; Sgt J R (Blondie) O'Hanlon RAF, Wireless Operator; Sgt Stan S Greenwood RAF, mid-upper gunner; Sgt C E (Bob) Shilling RAF, rear gunner and Flight Lieutenant Edward McPhee (Jock) Graham DFC, RAF, navigator. By 18 October Pilot Officer Lambell was flying his first operation, against Hanover. He flew operations against Leipzig, Kassel, Dusseldorf, Modane and twice to Berlin before the end of November. At this stage, 576 Squadron was formed at Elsham Wolds from 13 crews chosen from of C Flight, 103 Squadron; Lambell's crew was amongst those transferred and they formed part of the nucleus for the new Squadron. From 10 December 1943 until 20 April 1944, they flew missions to Berlin (nine times), Frankfurt (three times), Brunswick, Magdeburg, Schweinfurt, Augsburg, Stuttgart, Berlin, Essen, Aachen and Cologne. In total, Lambell flew 29 missions comprising 195 hours of flying. From mid October until 23 January 1944, his crew flew solely in Lancaster Mk V, serial number ED888; and thence most often in Lancaster Mk X, LM 439 until the end of his tour. In fact, ED888 was the RAF's highest mission Lancaster, undertaking 140 missions in total from May 1944 until December 1945 and Lambell flew a total of 106 hours 20 minutes in this aircraft. Lambell was recommended for the Distinguished Flying Cross (DFC) on 6 June 1944 for 'numerous attacks against the enemy'. His citation reads in full: 'As Air Bomber Pilot Officer Lambell has completed many operational sorties over enemy territory. He has participated in attacks on some of the enemy’s most heavily defended targets including 11 sorties against Berlin, and he has invariably performed his allotted tasks with consistent skill and courage, often in the face of strong enemy opposition. On one occasion during an attack on Berlin he was hit on the face by a piece of shrapnel whilst making his bombing run, but, undeterred, he released his bombs at the correct time and it was not until his aircraft landed at base that other crew members of the crew realised he had been injured.' Lambell's son reveals that his father's nose was substantially damaged on the occasion quoted and that restorative surgery was undertaken by pioneer plastic surgeon Dr Archibald McIndoe. Neal Lambell was killed in a car accident near his home at Gulargambone in 1968.