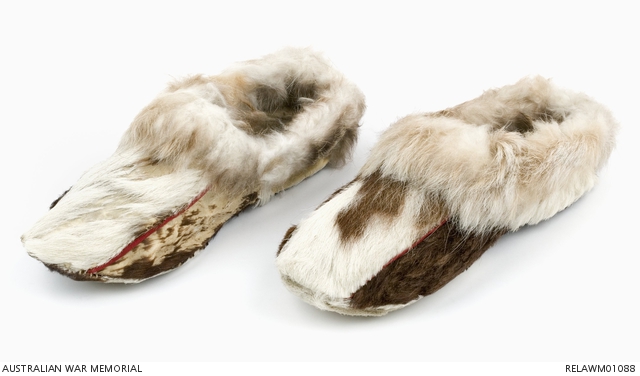 Pair of slippers made from cow hide. The slippers feature red piping which runs between the vamp and quarters, cow hide soles and a rabbit fur top band. They are fabric lined with felted nap, cream wool at the quarters and coarser woven brown fabric at the sole.

These fur slippers are associated with the service of 133002 Sergeant Samuel George Pearse in North Russia. Following his service with the AIF in Gallipoli and on the Western Front, he volunteered for the North Russia Relief Force in 1919. Upon discharge from the AIF in England on 18 July, he enlisted with the 45th Battalion, the Royal Fusiliers in the British Army and was sent to Archangel and then Emptsa.

Pearse wore these slippers during his service there, where he most likely have acquired them. Their fur soles suggest indoor use, perhaps in his living quarters, in an effort to retain comfort and warmth in the harsh conditions of Russia. He was posthumously awarded the Victoria Cross for his conspicuous bravery near Emptsa on 29 August 1919.