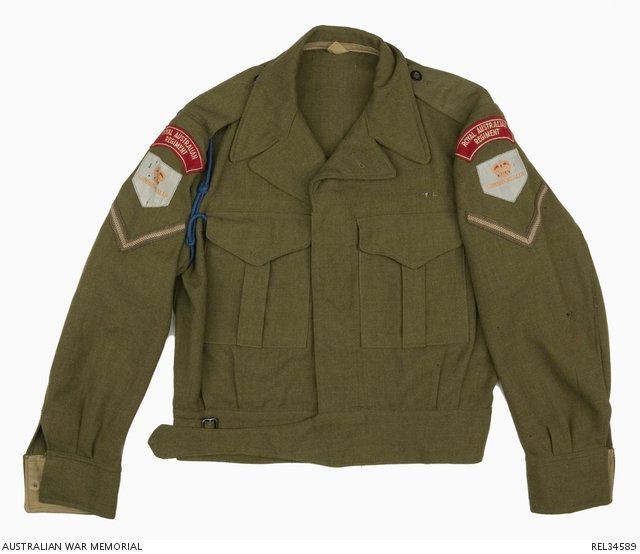 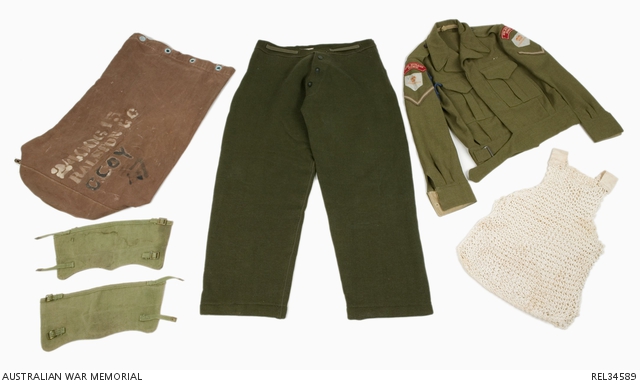 Khaki woollen Australian Army battledress blouse with two pleated patch breast pockets and a pair of side opening internal pockets. The blouse is fastened down the centre by five concealed brown plastic buttons, and the belted waist is gathered and fastened by a blackened steel buckle. The collar has a fold-over flap enabling it to be buttoned at the throat. There are concealed brown plastic buttons fastening the cuffs of the sleeves and the flaps of the pockets. The inside of the collar, cuffs, waist and placket are lined with khaki cotton drill. The fabric lining the rear waistband has three button holes for attachment to the battledress trousers. Shoulder straps are secured by brown plastic buttons. Below the shoulder strap on each sleeve is the machine embroidered red and white shoulder flash of the Royal Australian Regiment. Below these are the pale blue shield shaped shoulder patches of 1 Commonwealth Division (King's Crown) and woven lance corporal's chevrons. A blue cotton lanyard is around the right sleeve shoulder.

Battledress blouse worn by Lance Corporal G C Ralston MM. Gavin Carmichael 'Toby' Ralston was born at Seaham, via Maitland, NSW on 4 April 1928. He was a K Force volunteer and served with 1 Battalion, The Royal Australian Regiment, in Korea between 7 April 1952 and 24 March 1953. He was awarded the Military Medal for his actions in more than two dozen patrols into No-Man's-Land during the battalion's tour, including a patrol in September 1952 that attempted to recover Captain Phillip Greville and his men who had been captured by the enemy.