[Lyric sheet] Its a Long Way Back to Sydney 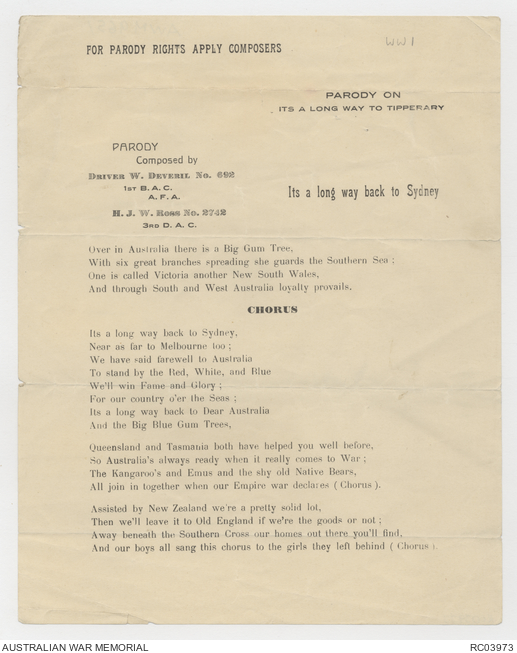 Lyric sheet for a song titled 'It's a Long Way Back to Sydney'. Sung to the tune of the popular song 'It's a long, long way to Tipperary', these lyrics were written by Driver Walter Goldstein Deveril and Harry James Wall Ross during the First World War.

The lyric sheet describes this song as a parody of the popular First World War song 'It's a long long way to Tipperary'. However, the lyrics evoke images of Australia as remembered by those who have left and is also patriotic in parts.

This copy has been published with the notice that for rights to use the parody, applications should be sent to the composers.

The song was described as a parody of 'It's a long long way to Tipperary' in several Australian newspapers which published it during 1915. It was first published in 'The Urana Independent and Clear Hills Standard' on 26 February 1915, who claimed that the author was only Driver Deveril. Deveril was also attributed as the sole author when it was published in the Bairnsdale Advertiser and Tambo and Omeo Chronicle on 20 March 1915 with the update that 'The Australians in Egypt are said to be singing with much gusto' this particular song. A week later it was published by The Ballarat Courier who recieved a copy of the lyrics from Private A V Gordon claiming that the words were 'widely sung' by the Australian soldiers in Egypt. Trooper C Newton sent a copy of the lyrics to his father, Mr W Newton of Murrumburrah. This copy was published in the Queanbeyan Age and Queanbeyan Observer on 5 March 1915 with the advice that the authors were Deveril and 2742 H J W Jones. This appears to be the first mention of the second author with the incorrect surname and one of the few to do so. Another copy of the lyrics were published in the Zeehan and Dundas Herald, Tasmania, on 29 April 1915 with the note that it "speaks plainly of the affection for the 'homeland' of our boys, who thought a lot of it in Egypt." A copy of it was enclosed with a letter that Trooper Ward from Rockhampton sent his mother that was subsequently published in The Capricornian on 31 July 1915. The lyrics were also published in a Swedish magazine and then republished in a newspaper for Scandinavian migrants in Australia on 15 May 1915. Other copies of these lyrics were published in the Wellington Times on 20 May 1915; the Gundagai Times and Tumut, Adelong and Murrumbidgee District Advertiser on 23 April 1915; the Camperdown Chronicle on 20 March 1915; The Independent (Benalla) on 19 March 1915; and in the Port Pirie Recorder and North Western Mail on 12 November 1915.

In Australia, this song was also performed at farewell concerts for those who had enlisted in the Australian Imperial Force. One of these was held in the Agricultural Hall, Geraldton, Western Australia on 18 August 1915. The evening was held in honour of eight locals who had enlisted with the first part of the evening given to musical entertainment where the song was performed as a duet by Ina and Maisey Healey.