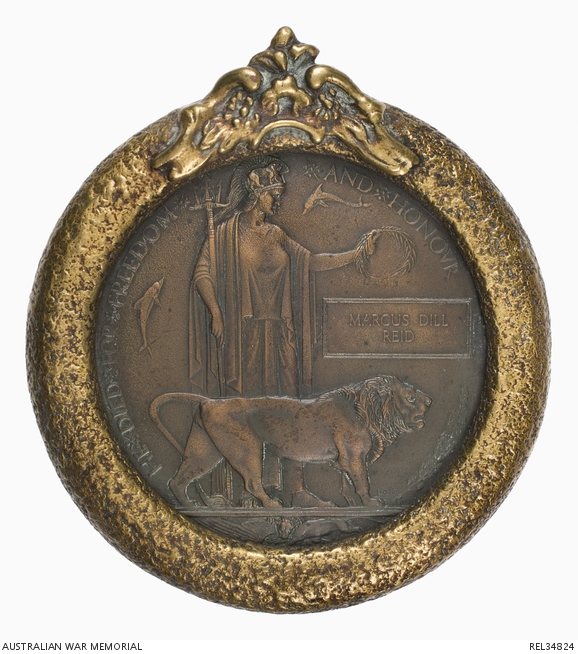 Bronze next of kin plaque showing Britannia and a lion together with the words 'HE DIED FOR FREEDOM AND HONOUR'. The name of the dead soldier, 'MARCUS DILL REID', is inscribed in raised letters within a raised rectangle. The plaque is displayed in a circular, gold painted, wood and plaster frame. On the reverse is a cardboard backing with a wire hanging loop.

Next of kin plaque sent to the family of 4523 Private Marcus Dill Reid, a clerk from Bankstown, NSW. Aged 21 he enlisted with the 1st Battalion on 10 September 1915 and embarked for Egypt aboard RMS Osterley on 15 January 1916. In March Reid transferred to the 13th Battalion. He spent several months in England with the 4th Training Battalion before proceeding to France and rejoining the 13th Battalion in the field in January 1917. Suffering from pneumonia Reid was evacuated to England for treatment and rejoined his unit in Belgium on 7 July. Reid died of wounds received in action on 13 July while occupying the front line near Ploegsteert Wood. He has no known grave and his name is commemorated on the Menin Gate Memorial, Belgium. His brother, 308 Corporal John Dill Reid, also served with the 13th Battalion; he was killed in action on 26 April 1915 at Gallipoli. Both brothers' photographs, medals and next of kin plaques are held in the Memorial's collection.