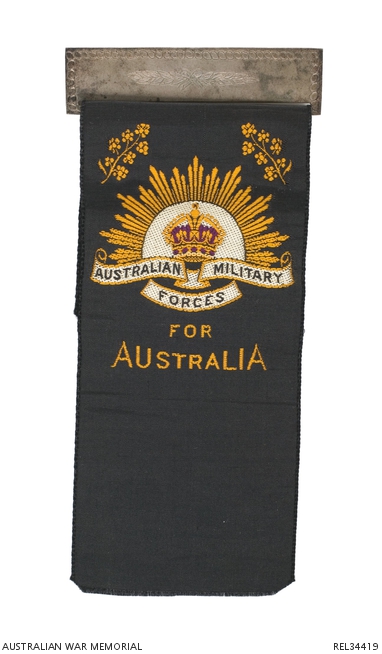 Black cotton ribbon with woven design, in yellow, red and white, showing two sprigs of wattle, the rising sun badge and 'FOR AUSTRALIA'. The top of the ribbon is attached to a white metal bar impressed with laurel leaves. The reverse bears a brooch pin fastening and is impressed with the serial number '27084'. Missing from the bottom of the badge is a similar white metal bar which would have had two brass stars indicating the death of Mrs Reid's two sons.

The Mothers and Widows Badge was issued to the mother and/or widow of all members of the Australian Imperial Force or the Australian Naval and Military Expeditionary Force who had been killed in action, died of wounds or of other causes while on active service; or who had died of wounds or sickness directly attributable to that service after discharge. Stars were added to the bottom bar (which is missing in this example), each indicating the death of a person.

This badge was issued to Mrs Mary Reid, mother of 308 Corporal John Dill Reid and 4523 Private Marcus Dill Reid. Within weeks of the outbreak of the First World War, John Dill Reid, a 21 year old poultry farmer from Holdsworthy, NSW, enlisted with C Company, 13 Battalion on 23 September 1914. He embarked from Melbourne aboard HMAT Ulysses on 22 December. After a period of training in Egypt, Reid landed at Anzac Cove, Gallipoli in the evening of 25 April 1915. He was killed in action the following day.

His brother, Marcus Dill Reid, a 21 year old clerk from Bankstown, NSW, enlisted with the 1st Battalion on 10 September 1915. He embarked for Egypt aboard RMS Osterley on 15 January 1916. In March Reid transferred to the 13th Battalion. He spent several months in England with the 4th Training Battalion before proceeding to France and rejoining the 13th Battalion in the field in January 1917. Suffering from pneumonia Reid was evacuated to England for treatment and rejoined his unit in Belgium on 7 July.