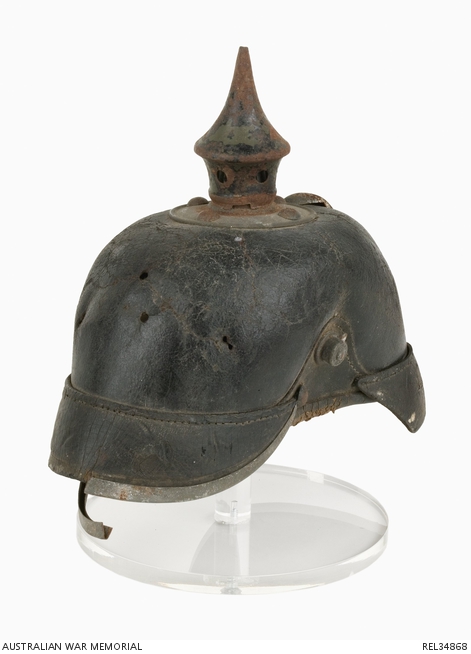 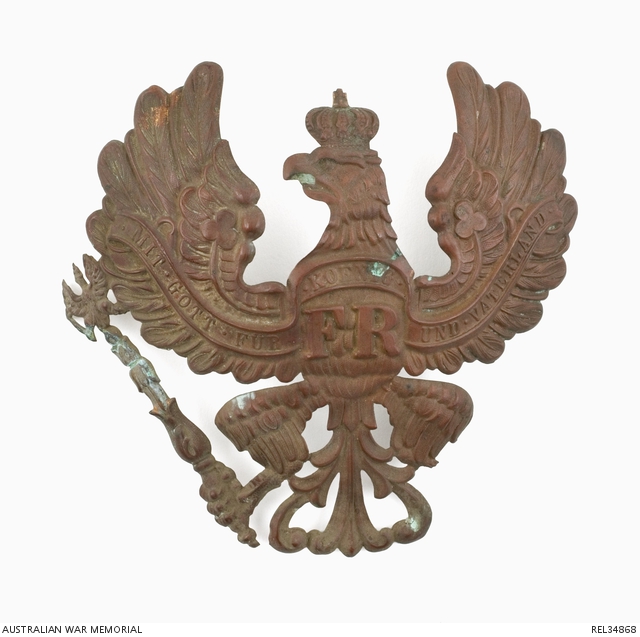 Leather pickelhaube with Prussian helmet plate. The leather is finished with black lacquer and the steel spike and base have been painted green. The pickelhaube has a leather chin strap which is detached from the body of the helmet. Also separated from the body is a thin bronze helmet plate which depicts the Prussian eagle. The left talon which usually clutches an orb has been snapped off. A leather liner is secured inside the helmet.

This pickelhaube was collected on the Western Front by Sergeant Albert Edward Green. A 28 year old farmer from Lismore, NSW, he enlisted in the AIF on 22 July 1915. He was assigned to the 6th reinforcements of 25 Battalion, with the service number 2682, and after basic training sailed from Brisbane for service overseas aboard HMAT Seang Lee on 21 October 1915. Green continued his training in Egypt and transferred to 9 Battalion, AIF on 28 February 1916, changing his service number to 2682A, before the battalion sailed to France for service on the Western Front. He was awarded the Military Medal on 25 February 1917 during the fierce fighting which caused the German retreat from the Hindenberg Line. In September 1917 Green undertook specialist training in England and qualified as a bomb (grenade) instructor, and in marksmanship, and was attached to a training battalion as an instructor for a number of months before rejoining 9 Battalion. In July 1918 he suffered accidental gunshot wounds to both hands and subsequently had the tips of the middle and fourth fingers on his left hand amputated. He saw no further active service and was allowed extended leave in England. In November 1919 he married Margaret Annie Waterman before returning to Australia the following month.