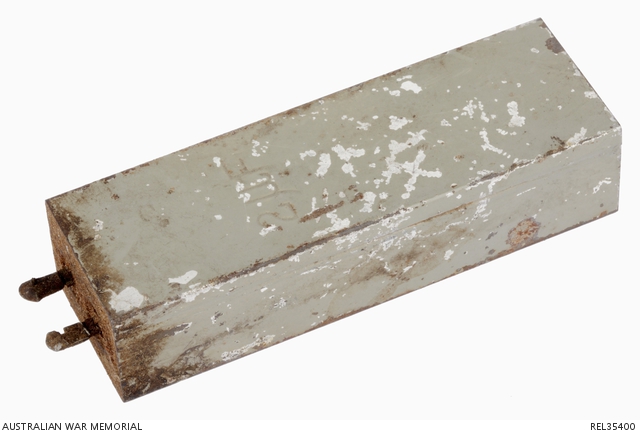 The 2 uF condenser is a rectangular shaped capacitor which is made from aluminium. It has two prongs extending out from one end to allow wires to be wound onto them so it can create a charge.

This 2 uF condenser is most likely a part of the unit relay circuit. The condenser would carry a charge to power the hydrostatic clock which in turn, would initiate the self destruct mechanism of the mine.

It is associated with the service of Lieutenant Hugh Randall Syme, Royal Australian Naval Volunteer Reserve (RANVR). Syme was born on 28 February 1903 at Kew, Melbourne. His father, John Herbert, was a journalist, and his son settled into the family business (they published 'The Age' newspaper) as assistant manager before the war. As a keen amateur sailor, the 6 foot tall Syme was accepted in the Royal Australian Naval Volunteer Reserve (RANVR) as part of the Yachtsman Scheme (whereby the Australian Naval Board provided personnel to the Admiralty via the RANVR).

He passed a navigation test and was appointed a probationary sub-lieutenant on 1 September 1940. Syme was soon mobilised to England and trained at HMS King Alfred. He was among the first group of Australians to be chosen to serve in the Rendering Mines Safe section and they received specialist training and were posted to HMS Vernon where the section was based.

Syme was promoted to lieutenant in mid December 1940. German bombing and air raids ensured the team had plenty of practice disarming unexploded mines and bombs. Syme rapidly developed a reputation for bravery, being awarded the George Cross and George Medal and bar for a string of successful mine recoveries. He is only one of eight people who have been awarded both the George Cross and George Medals for gallantry.

In January 1943 Syme returned to Australia following the deaths of his father and uncle, becoming temporary trustee of the family business. Despite his desire to return England, the RAN decided to keep him in Australia and utilise his expertise, setting him up in April 1943 at HMAS Cerberus as Commanding Officer of a bomb-disposal section. Little was asked of the section and Syme departed in December 1944, returning to the family business. In 1946 he was appointed general manager of 'The Age'. Syme returned to uniform briefly as part of Australia's Coronation Contingent in 1953. In 1948, Syme formed David Syme & Co. Ltd. He oversaw the company's entry into television in 1956 and was general manager until 1963. Syme was then director of the company until his death on 11 November 1965.