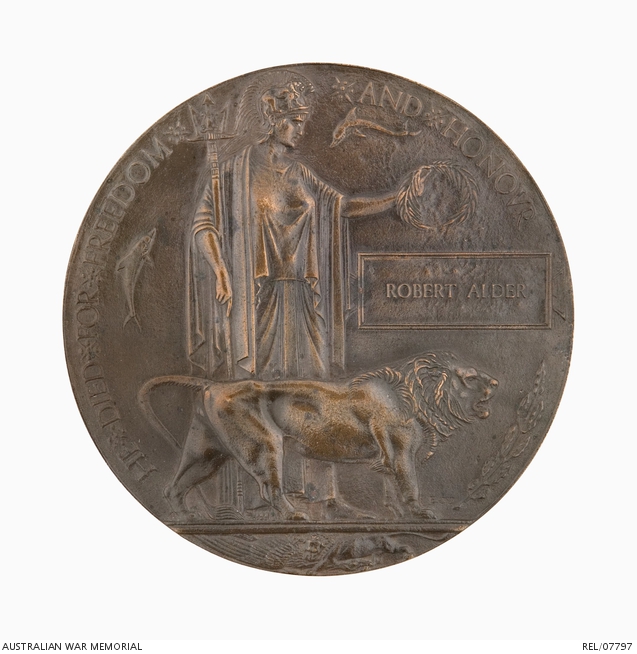 Bronze next of kin plaque in cardboard box of issue. The plaque shows Britannia and a lion together with the words 'HE DIED FOR FREEDOM AND HONOUR'. The name of the dead soldier, 'ROBERT ALDER', is inscribed in raised letters within a raised rectangle.The initials 'ECP', for the designer Edward Carter Preston, appear above the lion's right forepaw.

Born on 30 June 1897 in Carlton, Victoria, Robert 'Hoppy' Alder worked as a gardener and before the war had undertaken senior cadet training until the age of 15 when a broken leg, which earned him the nickname 'Hoppy', ended his military service. Some of his fellow soldiers later commented that he had a limp while in the AIF.

With his parent's permission Alder enlisted in the AIF on 14 July 1915, shortly after his 18th birthday. On 9 November he sailed for Egypt as a private, service number 1033, with D Company, 31st Battalion aboard HMAT Wandilla.

In Egypt Alder's battalion joined the newly raised 5th Division and then proceeded to the Western Front in June 1916. Alder was killed in action near Fleurbaix, France in the battle of Fromelles, on 21 July. He is buried in the Anzac Cemetery at Sailly-sur-la-lys.

This memorial plaque was sent to his mother, Mary Matilda Alder, to commemorate his death.