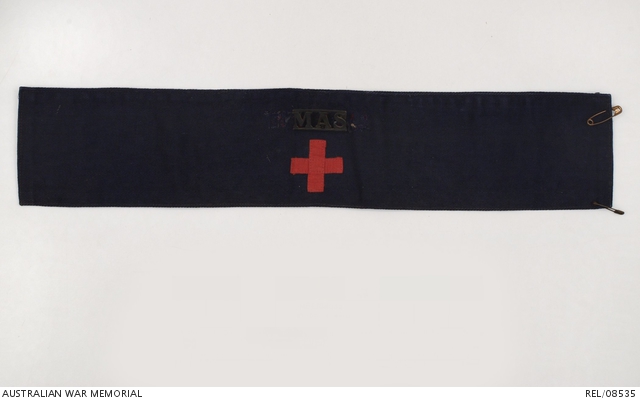 Dark blue cotton drill armband with small appliqued red cross in the centre. Above this is attached an oxidised brass shoulder title 'MAS'. The fabric behind the title appears to have once been embroidered in red lettering but this has been unpicked, damaging the fabric, and the letters cannot now be deciphered. There are two brass safety pins at one end of the armband so that it can be held in place around the wearer's arm.

Associated with Mrs Augusta M Cuthbe, who was a British civilian internee of the Japanese in Changi Prison, and later at Syme Road, Singapore. Her husband, Mr Kenneth V Cuthbe, an engineer with the British colonial service in Malaya, was interned in the men's section of the prison. Both survived the war and later settled in Australia.