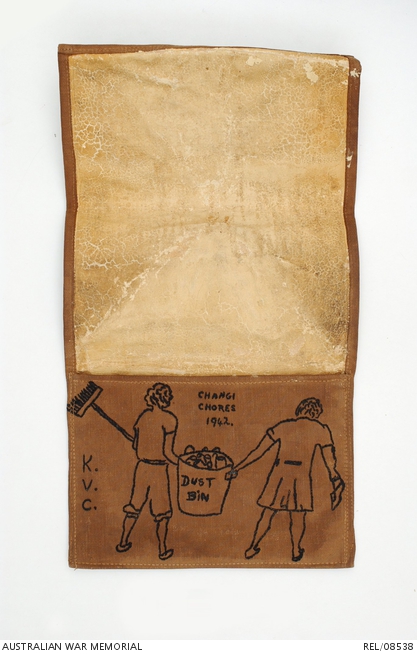 Khaki cotton folding tobacco pouch lined with cream coloured rubber. The inside bottom of the pouch is hand embroidered in black cotton chainstitch, with a scene of two women carring a broom and a full 'DUST BIN'. Above them are the words 'CHANGI CHORES 1942. Down the left side is 'K.V.C.', the initials of Mrs Cuthbe's husband, who was also interned in Changi.

Made by Mrs Augusta M Cuthbe, who was a British civilian internee of the Japanese in Changi Prison, and later at Syme Road, Singapore. Her husband, Mr Kenneth V Cuthbe, an engineer with the British colonial service in Malaya, was interned in the men's section of the prison. Both survived the war and later settled in Australia.