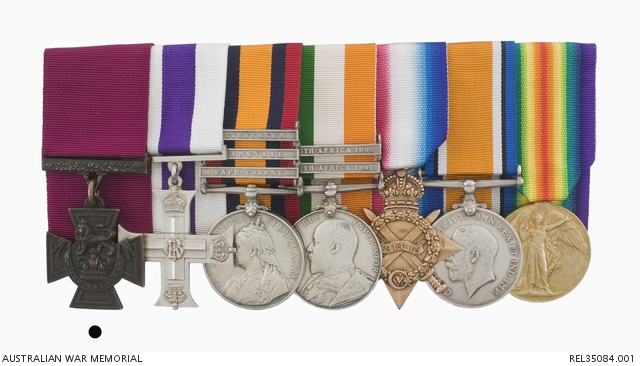 Alfred John Shout was born to John and Agnes Mary (widow McGovern, nee Kelly) Shout in Wellington, New Zealand on 7 August 1881. Little more is known of his early life. As an eighteen year old during the Boer War, he enlisted in the Border Horse on 17 February 1900 at around the time the unit was formed in the eastern portion of Cape Colony. He was Mentioned in Despatches while under heavy fire at Thabaksberg on 29 January 1901 when he had '... brought out of the firing line a wounded man of the 17th Battery, RFA, and took him to a place of safety.' In March he was promoted to sergeant. During his service in South Africa he was reportedly wounded in the chest but made a full recovery.

Discharged from the Border Horse on 23 May 1901, Shout sailed to Melbourne aboard the 'Damascus' arriving on 6 June, presumably on his way home to New Zealand. He later returned to South Africa and remained following the end of hostilities, becoming a sergeant in Captain MacDonald's Squadron of the Cape Colonial Forces. He married Australian-born Rose Alice Howe in Cape Town in 1905. Their daughter, Florence Agnes Maud, was born soon afterwards.

The Shouts emigrated to Sydney in 1907, where Alfred was employed as a carpenter at Resch's Brewery. Obituaries mention Shout as 'a familiar figure at the Randwick rifle range, being one of the mainstays of the 29th Infantry Club'. He had joined 29 Infantry Regiment soon after emigrating and obtained his commission on 16 June 1914. Enlisting with the AIF on 27 August 1914 as a second lieutenant with 'F' Company, 1 Battalion AIF, he embarked from Sydney aboard the HMAT 'Afric' on 18 October bound for the Middle East.

Shout was promoted to lieutenant on 1 February 1915 during the training period in Egypt. His battalion landed at Gallipoli on 25 April and Lieutenant Shout immediately displayed the leadership and bravery that came to characterise his service on Anzac. He and his company managed to advance and assist in holding the left flank of the feature 'Baby 700' throughout the day of 25 April but a determined Turkish advance forced their retirement at 4.30 pm.

The first days on Gallipoli were disastrous for 1 Battalion. After four days the battalion suffered 366 casualties and were scattered throughout the Australian front. The unit's war diary alludes to the initial confusion where 'the whole battalion was thrown into the firing line and worked independently'. Indicative of the esteem to which Shout was held, even at this early stage in the fighting, is the following account from an eye witness:

'He was the bravest of many brave men that revealed themselves that day', recalled Private Bethel, 'I saw him first on the Tuesday morning after the landing. There were only two officers left, Lieutenants Shout and Harrison, and our position was desperate. The gallantry of both was remarkable, but Lieutenant Shout was a hero. Wounded himself several times, he kept picking up wounded men and carrying them out of the firing line. I saw him carry fully a dozen men away. Then another bullet struck him in the arm, and it fell useless by his side. Still he would not go to the rear.

"I am with you boys to the finish", was the only reply he would make. We all thought, too, that it was to be a finish for us. The Turks were attacking us in thousands. We were not properly entrenched, and we were hopelessly outnumbered. A little later Lieutenant Shout was wounded again, and fell down. It was cruel to see him. He struggled and struggled until he got to his feet, refusing all entreaties to go to the rear. Then he staggered and fell, and tried to rise again. At last some men seized him and carried him away, still protesting.'

Following a month of recuperation on a hospital ship, Shout rejoined his battalion on 26 May. For his actions two days after the landing, Shout was awarded the Military Cross. The recommendation for the award reads:

On 29 July he was promoted to captain, by which time newspaper reports in Australia had begun to accrue on the actions of this 'light-hearted and laughing' red-haired officer. His contribution during the first months of the fighting was further recognised with a Mention in Despatches in early August. A few days later the battalion was thrown into the Battle for Lone Pine, a feint designed to draw Turkish troops from the actual Allied objective of Sari Bair. By late evening of 6 August, the first day of the attack, 1 Battalion was defending captured Lone Pine trenches, resisting a heavy counter attack early the following morning before being relieved by 7 Battalion. The relief was short lived and the battalion was ordered back into the firing line around mid-afternoon.

By now the unit was holding the centre of the position and repulsing violent counter attacks with casualties mounting until relieved again on the afternoon of the 8th. On the morning of the 9th an urgent message was received and the battalion once more rushed to reinforce the lines. One section, known as 'Sasse's Sap' after Captain C D Sasse, had been recaptured by Turkish troops that morning and Shout and Sasse decided to clear it. The two men, along with a small detachment carrying sandbags to build barricades, stormed down the trench. Shout forced the enemy back with bombs (grenades), accounting for eight Turks, while Sasse accounted for another twelve with his rifle. The men recaptured around twenty metres of trench and established a barricade.

That afternoon the men decided to try and repeat their earlier success, but for Shout it would have tragic consequences. Reaching the barricade, Shout assessed the area before pushing it down. The two officers moved up the trench assuming the same roles as the morning raid; Shout bombing while Sasse used his rifle. Successful in their push to gain more of the trench, the men decided on a place to fortify their position. To keep the Turks at bay, Shout attempted to light three bombs simultaneously and send them into the Turkish trench to dissuade any enemy from attacking while the new barricade was built.

One of the bombs exploded close to his body, 'blowing off his hand and shattering his side.' Despite the horrific injuries, Shout was carried to the rear in his usual high spirits. Official historian Charles Bean reported that he 'talked cheerfully, drank tea and sent a message to his wife.' Succumbing to his wounds he died three days later on board the hospital ship 'Neuralia' and was buried at sea. For his actions, Shout was awarded a posthumous Victoria Cross, one of seven awarded during the Battle of Lone Pine.

The original recommendation has not survived though a letter from 1 Battalion's commanding officer, Lieutenant Colonel Alfred Joshua Bennet, to Shout's widow indicates that he had already been recommended for the award for his actions during the earlier attack.

Alternate reports suggest that Shout was not involved in the morning's attack at all, however, in all probability the witness statements that accompany a Victoria Cross recommendation would have supported the final citation text. The citation for the award reads:

'For most conspicuous bravery at Lone Pine Trenches, in the Gallipoli Peninsula. On the morning of 9 August 1915, with a small party, Captain Shout charged down trenches strongly occupied by the enemy and personally threw four bombs among them, killing eight and routing the remainder. In the afternoon of the same day, from the position gained in the morning, he captured a further length of trench under similar conditions and continued personally to bomb the enemy at close range, under very heavy fire, until he was severely wounded, losing his right hand and left eye, this most gallant officer has since succumbed to his injuries'.

Rose received a telegram informing of her husband's death in late August but almost immediately received another telegram advising that her husband had not died, indeed he was only wounded and on his way to Australia on board the Themistocles and would be arriving home in mid-September. Despair turned to joy but it too was short lived. A retraction quickly followed that a terrible mistake had been made and the original telegram had conveyed the truth.

By coincidence, a soldier by the name of Lieutenant Arthur John Shirt of Alfred's battalion had been put on a ship bound for Australia due to illness at around the same time that Alfred died. It was assumed that the A J Shirt was a typing error putting into train this sad chain of events. This was possibly the second time that Shout's fate had been wrongly reported. A Sydney Morning Herald article in August 1915 reported that during the Boer War Shout's mother had been officially notified of her son's death, though her reaction to his safe return is unknown.

In November 1915 a tablet to the memory of Captain Shout was unveiled by Governor General Munro Ferguson in Darlington Town Hall. The following year the Returned Soldiers' Association mounted an appeal to buy a home for Shout's widow and daughter with assistance from the NSW Government.

In the fourteen weeks that Shout was on Gallipoli he attained an almost legendary reputation among his peers. Between 25 April and his death four days after his 34th birthday, he had won a Victoria Cross and a Military Cross as well as a Mention in Despatches, becoming Australia¿s most decorated soldier on the peninsula. His name is commemorated on the Lone Pine Memorial at the east end of the Lone Pine Cemetery on Gallipoli.