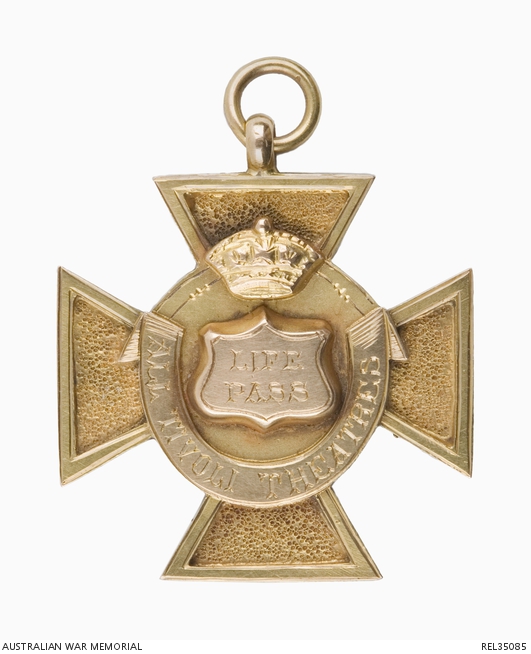 Gold life pass to Tivoli Theatres, presented to the widow of Captain AJ Shout. The medallion is shaped like a Victoria Cross, but has a raised central shield shape engraved with the words 'LIFE PASS'. A banner underneath is engraved 'ALL TIVOLI THEATRES'. Hand engraved on the reverse are the words 'For Valour An Appreciation BY THE HON. HUGH. D. McINTOSH M.L.C. CAPT. ALF. SHOUT V.C., M.C.'

Alfred John Shout was born in Wellington, New Zealand on 7 August 1881. As an eighteen year old, he joined the New Zealand Contingent to the Boer War in 1900 as a Lance Corporal, serving with the Border Horse and later with the Stellenbosch District Mounted Troop and the Cape Colonial Forces until 1902. Shout was Mentioned in Despatches for an action on 29 January 1901 at Thabaksberg where he 'displayed great courage and assisted in keeping men together. Under a heavy fire he brought out of the firing line a wounded man and took him to a place of safety', and was soon promoted to Queen's Sergeant. Shout himself was wounded in the chest during his Boer War service but made a full recovery. He chose to remain in South Africa at the end of hostilities, becoming a sergeant in the Cape Field Artillery in 1903 and marrying Australian-born Rose Howe in Cape Town in 1905. Their daughter Florence was born soon afterwards.

The Shouts emigrated to Sydney in 1907, where Alfred was employed as a carpenter at Resch's Brewery. Obituaries mention Shout as 'a familiar figure at the Randwick rifle range, being one of the mainstays of the 29th Infantry Club'; he had joined 29 Infantry Regiment in 1907 and obtained his commission on 16 June 1914. Enlisting with the AIF on 27 August 1914 as a second lieutenant with 'F' Company, 1 Battalion, he embarked from Sydney aboard the HMAT Afric on 18 October. Shout was promoted to lieutenant on 1 February 1915 during the training period in Egypt.

His battalion landed at Gallipoli on 25 April and Lieutenant Shout immediately displayed the leadership and bravery that came to characterise his service. His company managed to advance and hold the left flank of the feature 'Baby 700' throughout the day of 25 April but a determined Turkish advance forced their retirement at 4.30 pm. Two days later, he was recommended for the Military Cross for operations near Gaba Tepe on the left flank. His citation reads 'For showing conspicuous courage and ability in organising and leading his men in a thick bushy country under very heavy fire. He frequently had to expose himself to locate the enemy and led a bayonet charge at a critical moment. He continued until wounded.'

Shout soon returned to action and was reported as being shot in the arm on 11 May while carrying over a dozen wounded comrades to safety, but recovered and rejoined his company on 26 May. On 29 July he was promoted to captain, by which time newspaper reports in Australia had begun to accrue on the actions of this 'light-hearted and laughing' red-haired officer.

Two days after his thirty-fourth birthday, on 9 August, Captain Shout's battalion took over the Lone Pine trenches from 3 Battalion. Part of that complex, known as 'Sasse's Sap' after Captain CD Sasse of 1 Battalion, had been reoccupied by Turkish troops and Shout and Sasse decided to clear it. Their close-range bomb and rifle attacks in the morning proved successful and gained a significant length of trench, with Shout bombing, Sasse shooting and three others sandbagging the gains. The operation was repeated in the afternoon under circumstances which earned Shout the Victoria Cross. His citation states 'he captured a further length of trench under similar conditions and continued personally to bomb the enemy at close range, under heavy fire until he was severely wounded'.

Witnesses recall that Shout had lit three jam-tin bombs in preparation for his next assault 'when they went off suddenly and blew a portion of one hand off, part of his chin and one of his eyes out'. Despite these injuries, Captain Shout remained cheerful as he was carried down to the rear for treatment. Official Historian CEW Bean noted 'he sat up and drank a pannikin of tea, vowing he would soon recover, but his brave life ended on the hospital ship Neuralia; that was on 11 August and he was buried at sea on the same day.'