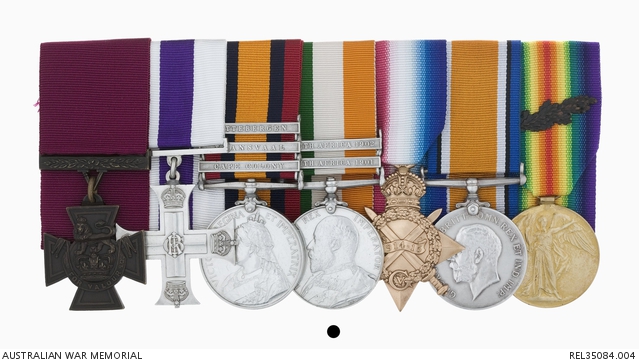 King's South Africa Medal with clasps 'SOUTH AFRICA 1901' and 'SOUTH AFRICA 1902'. Medal engraved around edge with recipient's details. Obverse: The bust of King Edward VII and the legend 'EDWARDVS VII REX IMPERATOR'. Reverse: Britannia with a flag in her left hand holding out a laurel wreath towards an advancing party of soldiers. In the background are two warships. The wreath in Britannia's hand points to the letter 'F' in the word 'AFRICA'. Around the top are the words 'SOUTH AFRICA'. The medal is fitted with a straight suspender and two rectangular date bars. Missing a piece of 32 mm ribbon of green, white and yellow in equal widths.

Alfred John Shout was born in Wellington, New Zealand on 7 August 1881. As an eighteen year old during the Boer War, he enlisted in the Border Horse on 17 February 1900 at around the time the unit was formed in the eastern portion of Cape Colony. He served with the unit at Wittebergen, Transvaal and Cape Colony until May 1901. Records suggest that he also served with the Stellenbosch District Mounted Troop. For his actions at Thabaksberg on 29 January 1901 he was awarded a Mention in Despatches.

The citation for the award reads: 'Displayed great courage and assisted greatly in keeping men together. Under a heavy fire he brought out of the firing line a wounded man of the 17th Battery, RFA, and took him to a place of safety.'

During his service in South Africa he was wounded in the chest, some reports say twice, but made a full recovery. He returned home briefly before moving back to South Africa, remaining after the end of hostilities and becoming a sergeant with Captain MacDonald's Squadron, Cape Colonial Forces. He married Australian-born Rose Howe in Cape Town in 1905. Their daughter, Florence Agnes Maud, was born soon afterwards.

Shout was promoted to lieutenant on 1 February 1915 during the training period in Egypt. His battalion landed at Gallipoli on 25 April and Lieutenant Shout immediately displayed the leadership and bravery that came to characterise his service on the peninsula. He and his company managed to advance and assist in holding the left flank of the feature 'Baby 700' throughout the day of 25 April but a determined Turkish advance forced their retirement at 4.30 pm.

The first days on Gallipoli were disastrous for 1 Battalion. Over four days the battalion suffered 366 casualties and were scattered throughout the Australian front. Indicative of the esteem to which Shout was held, even at this early stage in the fighting, is the following account:

Following a month of recuperation on a hospital ship, Shout rejoined his battalion on 26 May. For his actions two days after the landing, Shout was awarded the Military Cross.

On 29 July he was promoted to captain. His contribution during the first months of the fighting was further recognised with a Mention in Despatches in early August. A few days later the battalion took part in the Battle for Lone Pine. It was during the fighting on 9 August that Shout was mortally wounded in the action for which he was awarded a posthumous Victoria Cross.