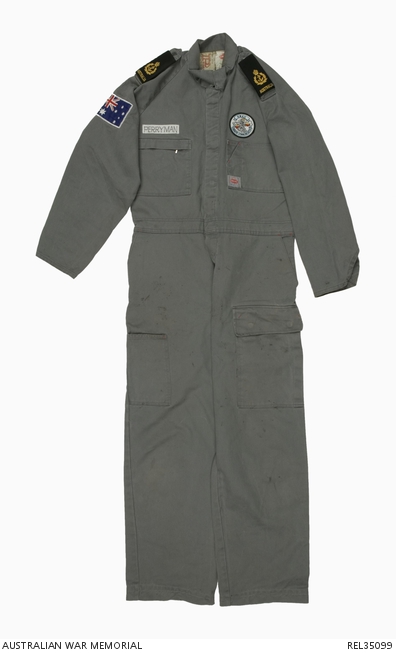 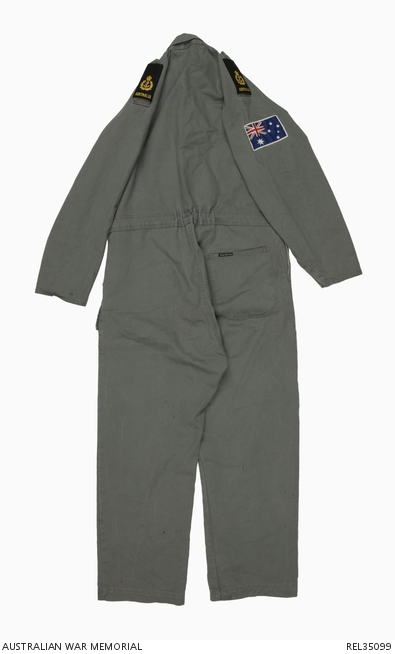 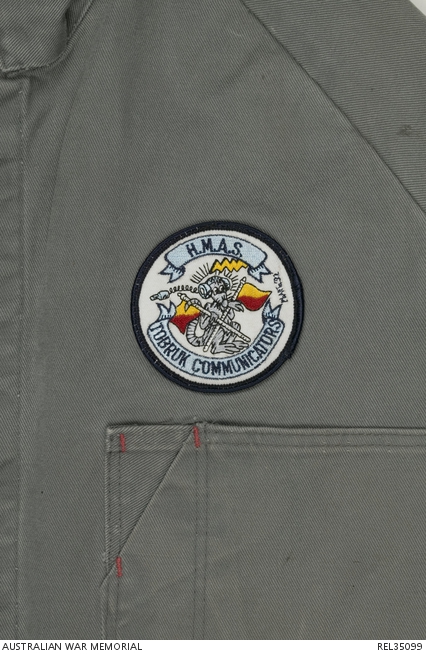 Lightly stained size 97R heavy duty grey cotton overalls with Chief Petty Officer (CPO) slides on the epaulettes. Over the right breast is a white patch with the surname 'PERRYMAN' written in ink. Sewn over the left breast is a white circular embroidered badge with a blue border featuring a rat wearing headphones and holding two red and orange signal flags. There is a yellow lighting bolt above the rat's head and he is surrounded by scrolls in which are the words, 'HMAS TOBRUK COMMUNICATORS'. There is an embroidered Australian flag with a white border sewn onto the upper right sleeve. There are two maker's tags sewn inside the collar. The overalls are fastened at the front and the cuffs with circular metal press studs. There are two patch breast pockets. The right pocket has a concealed zipper and the left has a small narrow pen pocket sewn on the edge. There is a another patch pocket on the left thigh with a flap secured by two press studs. The right thigh has a narrow patch pocket. There are two slash pockets at the hips and a rear patch pocket on the right.

Overalls worn by Chief Petty Officer Signals Yeoman (CPOSY) Duncan John Perryman, on board HMAS Tobruk during his service in Somalia. UNOSOM II (United Nations Operation in Somalia) was the second phase of the United Nations intervention in Somalia. It ran from March 1993 until March 1995. UNOSOM II carried on from the US-controlled (but UN sanctioned) UNITAF, which had in turn taken over from the UNOSOM I mission. All three of these interventions were aimed at creating a secure enough environment for humanitarian operations to be carried out in the increasingly lawless and famine-struck country.

The RAN played an important part in the UNOSOM deployment, transporting the battalion group equipment, vehicles, and some troops, to Somalia on board the training ship HMAS Jervis Bay and the heavy landing ship HMAS Tobruk. Tobruk subsequently remained in the area providing logistic support to the Australians and UNITAF, and conducted surveillance off the Somali coast. Its helicopter was used in ship-to-shore transport of personnel. Tobruk was also used by land forces for rest and recreation.