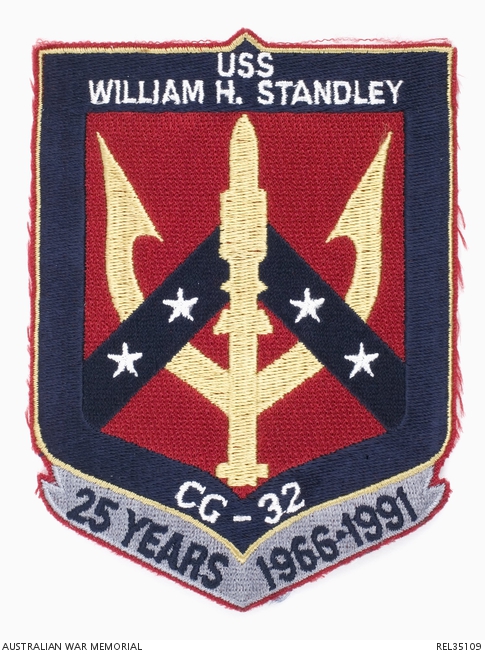 25 years commemorative woven cloth badge for the USS William H Standley. The red badge is in the shape of a shield, with a blue, gold and red border and features a golden trident head with a missile as the central fork. Set at forty five degrees within the trident head are two blue bands each with two white stars. Above and below the trident in white lettering is, 'USS WILLIAM H STANDLEY CG - 32'. At the bottom of the badge is a grey scroll embroidered with, '25 YEARS 1966-1991'. On the reverse of the badge is a paper sticker on which is printed, 'MARINE PHOTO & PUBLISHING CO. PO BOX 425 SPRING VALLEY, CA 91976-0425 (619) 477-2560'.

Badge collected by Chief Petty Officer Signals Yeoman (CPOSY) Duncan John Perryman during his service in HMAS Tobruk as part of UN operations in Somalia. USS William H Standley (DLG/CG-32) was a Belknap-class destroyer leader / cruiser. She was named for Admiral William Harrison Standley, former Chief of Naval Operations and ambassador to the Soviet Union. After more than 27 years of service, William H Standley was decommissioned on 11 February 1994. She was sunk off the eastern coast of Australia as part of Exercise Talisman Sabre on June 25, 2005, along with ex-Elliot (DD-967). Both ships are now artificial reefs about 100 nautical miles (190 km) east of Fraser Island, Queensland, Australia.

UNOSOM II (United Nations Operation in Somalia) was the second phase of the United Nations intervention in Somalia. It ran from March 1993 until March 1995. UNOSOM II carried on from the US-controlled (but UN sanctioned) UNITAF, which had in turn taken over from the ineffectual UNOSOM I mission. All three of these interventions were aimed at creating a secure enough environment for humanitarian operations to be carried out in the increasingly lawless and famine-struck country. The RAN played an important part in the UNOSOM deployment, transporting the battalion group equipment, vehicles, and some troops, to Somalia on board the training ship HMAS Jervis Bay and the heavy landing ship HMAS Tobruk. Tobruk subsequently remained in the area in support, providing logistic support to the Australians and UNITAF, and conducted surveillance off the Somali coast. Its helicopter was used in ship-to-shore transport of personnel. Tobruk was also used by the land forces for rest and recreation.