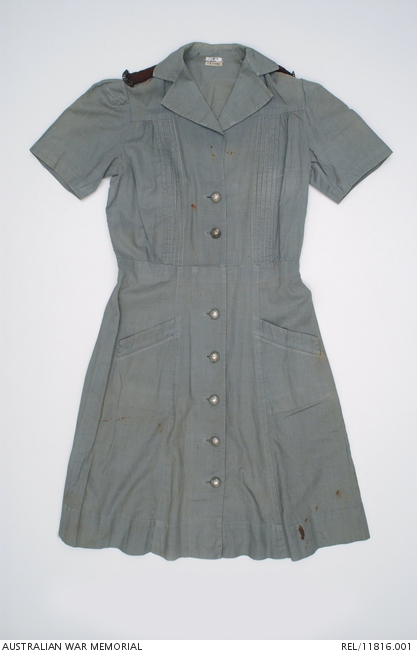 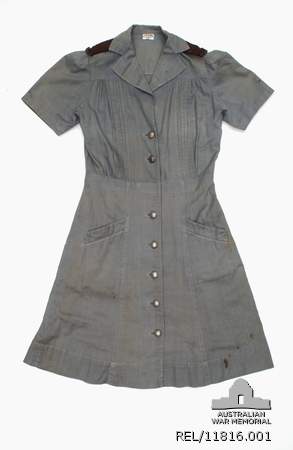 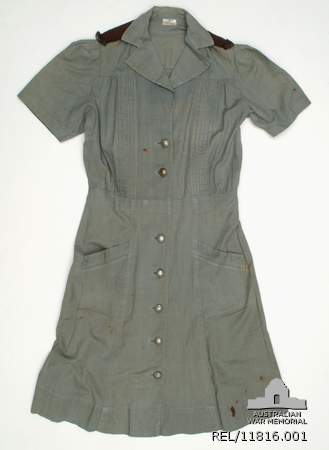 Grey cesarine tropical pattern ward dress, custom made by a Singapore tailor. Front opening dress has open neck collar, short sleeves, front and back yoke, and five vertical rows of tucks on either side of the centre front and back. Six gore skirt has two inset pockets with angled openings. Dress is complete with silver AMF buttons (made by Stokes & Sons, Melbourne) and brown fabric epaulettes with oxidised 'AUSTRALIA' titles. The epaulettes are fastened to the dress with oxidised AMF buttons. Inside dress bears a white cotton name tape printed in black 'J.K.GREER'. Dress is missing its original self fabric belt.

Tropical uniform dress worn by NX70937 Sister Jean (Jenny) Keers Greer, of 2/10 Australian General Hospital, when the SS Vyner Brooke was sunk by the Japanese in February 1942. Sister Greer was subsequently taken prisoner of war. She initially wore the dress in captivity but later it was only worn for special occasions such as on birthdays, Anzac Day, and the King's Birthday. She also wore it on her release from captivity, when she was evacuated to Singapore.