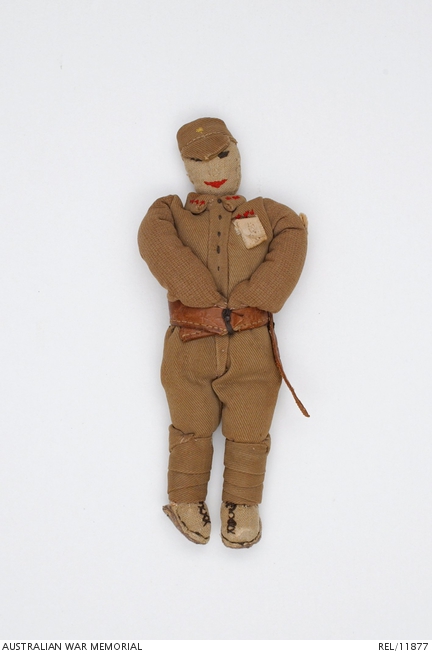 Soft doll made to represent a Japanese guard nick-named 'Bully' at a prison camp for women near Loebek Linggau in Sumatra. It was been fashioned from part of a stolen Japanese soldier's khaki coloured shirt tail, and other fabric and leather scraps. Doll shows a Japanese soldier complete with cap, embroidered face and rank insignia, a leather belt and sword, puttees, and cloth identity patches on breast and left arm. It is an accurate representation of the uniform of a soldier of the Japanese Imperial Army.

Made for Australian army nurse Betty Jeffrey, of 2/10 Australian General Hospital, as a present for her birthday on 14 May 1945, by fellow Australian nurse Val Smith, of 2/13 Australian General Hospital, while they were prisoners of war in Sumatra. Sister Agnes Betty Jeffrey, known to her colleagues as 'Jeff', was born in Hobart on 14 May 1908. She graduated from her nursing studies in 1940 and enlisted in the Australian Army Nursing Service (AANS) on 9 April 1941. She was assigned to 2/10 General Hospital and sent to Singapore before the Japanese invasion of the island. In February 1942 she was one of 65 AANS sisters evacuated on the Vyner Brooke. On 14 February the ship was attacked and sunk by Japanese aircraft. Jeffrey spent several days swimming and made it to Banka Island. There she was captured and interred with the surviving nurses and civilians from the ship. Jeffrey spent the next three years in Prisoner of War camps in Sumatra and was liberated in September 1945.