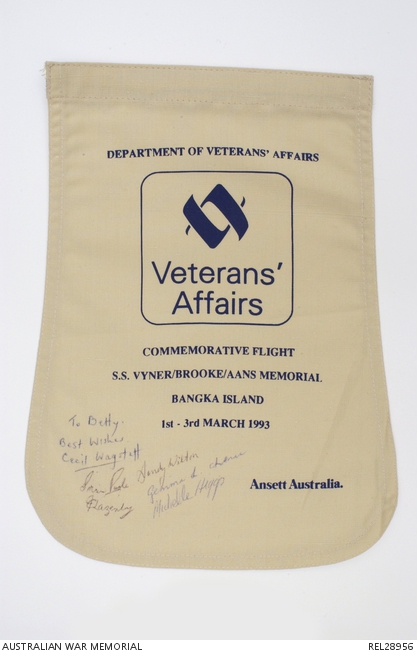 Beige cotton headrest cover with velcro strip on the top of the back to attach it to the seat. The front is printed in blue with 'DEPARTMENT OF VETERANS' AFFAIRS'(DVA) followed by the DVA logo and the words 'COMMEMORATIVE FLIGHT S.S. VYNER/BROOKE/AANS MEMORIAL BANGKA ISLAND 1st-3rd MARCH 1993 ANSETT AUSTRALIA'. The bottom has been signed in ink with the signatures of six people involved with the commemorative flight.

In 1993 the Department of Veterans' Affairs organized a commemorative flight to Banka Island. This headrest cover was souvenired by Miss Agnes Betty Jeffrey who served as a nurse during the war and was captured on Banka Island after the sinking of SS Vyner Brooke. Many of her colleagues did not survive the sinking or were massacred by the Japanese on their surrender. Sister Agnes Betty Jeffrey, known to her colleagues as 'Jeff', was born in Hobart on 14 May 1908. She graduated from her nursing studies in 1940 and enlisted in the Australian Army Nursing Service (AANS) on 9 April 1941. She was assigned to 2/10 General Hospital and sent to Singapore before the Japanese invasion of the island. In February 1942 she was one of 65 AANS sisters evacuated on the Vyner Brooke. On 14 February the ship was attacked and sunk by Japanese aircraft. Jeffrey spent several days swimming and made it to Banka Island. There she was captured and interred with the surviving nurses and civilians from the ship. Jeffrey spent the next three years in Prisoner of War camps in Sumatra and was liberated in September 1945.