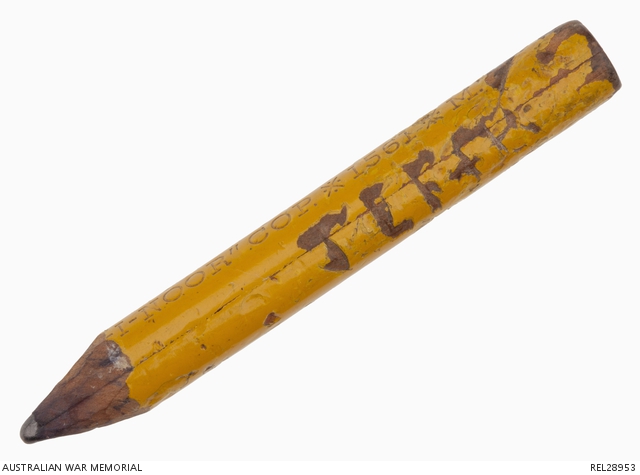 Stub of yellow pencil with some manufacturer's markings visible along one side. At the end is scratched the first letters of the owner's name 'JEFFR'.

This pencil was used by Sister Agnes Betty Jeffrey to record her experiences as a prisoner of war in Sumatra. Jeffrey, known to her colleagues as 'Jeff', was born in Hobart on 14 May 1908. She graduated from her nursing studies in 1940 and enlisted in the Australian Army Nursing Service (AANS) on 9 April 1941. She was assigned to 2/10 General Hospital and sent to Singapore before the Japanese invasion of the island. In February 1942 she was one of 65 AANS sisters evacuated on the Vyner Brooke. On 14 February the ship was attacked and sunk by Japanese aircraft. Jeffrey spent several days swimming and made it to Banka Island. There she was captured and interred with the surviving nurses and civilians from the ship. Jeffrey spent the next three years in Prisoner of War camps in Sumatra and was liberated in September 1945.