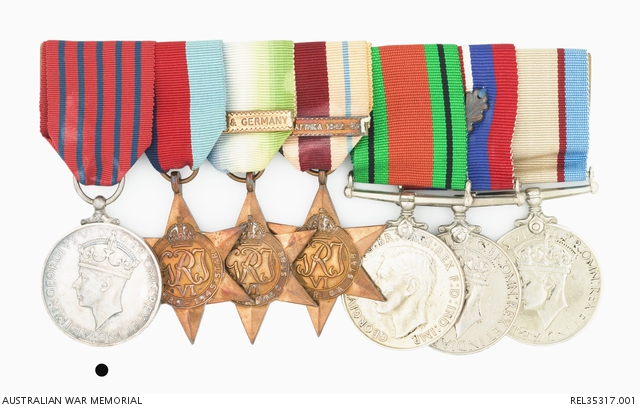 Born 7 September 1914 at Rockhampton, Queensland, Arthur Gerald Graham Richmond, a jackeroo and storeman and packer of New Farm, Brisbane, had completed 12 hours of flying training at Archerfield, Brisbane prior to enlisting with the RAAF on 26 April 1940 at Brisbane. Mustered as an Air Observer and assigned the service number 404037, Richmond received initial training in Australia before embarking for overseas service from Sydney on 3 February 1941. He arrived in the Middle East on 24 March and was attached to 230 (Sunderland) Squadron, RAF, based at Aboukir Bay near Alexandria, Egypt as a navigator, where he spent 5 months. He then returned to training, spending three months in Rhodesia with 28 Elementary Flying Training School (28 EFTS) and 23 Service Flying Training School (23 STFS) until February 1942 and finally 61 General Reconnaissance School (61 GR) in South Africa (where he met his future wife, Violet) before returning to 230 Squadron on 14 July 1942. Pilot Officer Richmond was awarded the George Medal for an episode on 7 September 1942 when Sunderland W3987, with a crew of eleven flying to Alexandria for an engine change, crashed on take-off at Aboukir Bay, killing 8 members of the crew. The port outer engine had required changing due to a major oil leak, but after a test flight, was considered stable enough to fly to Alexandria. Richmond had control of the aircraft at take off and stated that ‘on reaching about 75 feet swing developed to port and smoke began to fill the cockpit.’ At this point the commanding pilot, 29 year old 400226 Flight Lieutenant Alan Frederick Howell, RAAF, took over the controls, by which time Richmond recalled that ‘it was practically impossible to see anything in the cockpit’ and the plane began to lose height. Witnesses stated the Sunderland ‘hit water at high speed, bounced high into the air and hit water again with port wing first’. An eight foot swell decided their fate, with no recovery possible, and the Sunderland crashed. The citation for the George Medal reads, ' Pilot Officer Richmond was a member of the crew of a Sunderland aircraft which crashed into the sea in September 1942. He observed another member of the crew (the wireless operator air gunner) who was surrounded by a pool of burning petrol and unable to swim owing to a broken leg. Although suffering from lacerations of the scalp, right arm, left leg and left knee, Pilot Officer Richmond dived under the flames, pulled his comrade to safety and eventually succeeded in getting him to a semi-inflated dinghy. He then supervised the rescue of 3 more of his companions and it was not until it became certain that no other survivors were in the vicinity that he abandoned the search and boarded a rescue boat. Pilot Officer Richmond displayed a very high standard of courage and devotion to duty and undoubtedly saved the wireless operator's life.' After recovering at 64 General Hospital, Richmond returned to operations with 230 Squadron (undertaking anti-submarine and escort patrols in the Mediterranean) until he was transferred 461 Squadron, RAAF, at Pembroke Dock, Wales on 6 October 1943. On 28 February 1944 Richmond was promoted to Flight Lieutenant – a month later RAAF Overseas Command reported that Richmond was ‘recently married at St Martins-in-the-Fields Church … to Violet Elsie Thorne of Johannesburg who met Richmond while he was training there’. The majority of his work with 461 Squadron consisted of anti-submarine patrols in the Bay of Biscay and convoy patrols. Richmond was the first member of 461 Squadron to fly on D-Day (where his galley primus caught fire and curtailed the mission); he spent June and July 1945 escorting surrendered U-Boats to England. He was discharged on 21 February 1946.