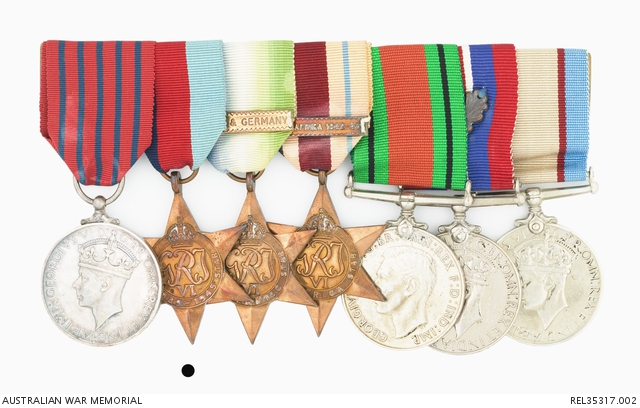 Born 7 September 1914 at Rockhampton, Queensland, Arthur Gerald Graham Richmond, a jackeroo and storeman and packer of New Farm, Brisbane, had completed 12 hours of flying training at Archerfield, Brisbane prior to enlisting with the RAAF on 26 April 1940 at Brisbane. Mustered as an Air Observer and assigned service number 404037, Richmond received initial training in Australia before embarking for overseas service from Sydney on 3 February 1941. He arrived in the Middle East on 24 March and was attached to 230 (Sunderland) Squadron, RAF, based at Aboukir Bay near Alexandria, Egypt, as a navigator, where he spent 5 months. He then returned to training, spending three months in Rhodesia with 28 Elementary Flying Training School (28 EFTS) and 23 Service Flying Training School (23 STFS) until February 1942 and finally 61 General Reconnaissance School (61 GR) in South Africa (where he met his future wife, Violet) before returning to 230 Squadron on 14 July 1942. Pilot Officer Richmond was awarded the George Medal for an episode on 7 September 1942 when Sunderland W3987, with a crew of eleven flying to Alexandria for an engine change, crashed on take-off at Aboukir Bay, killing 8 members of the crew. Although severely lacerated, Richmond saved his wireless air gunner who was trapped in a pool of burning oil with a broken leg, then supervised the rescue of three more crew members. After recovering at 64 General Hospital, Richmond returned to operations with 230 Squadron (undertaking anti-submarine and escort patrols in the Mediterranean) until he was transferred 461 Squadron, RAAF at Pembroke Dock, Wales on 6 October 1943. On 28 February 1944 Richmond was promoted to Flight Lieutenant – a month later RAAF Overseas Command reported that Richmond was ‘recently married at St Martins-in-the-Fields Church … to Violet Elsie Thorne of Johannesburg who met Richmond while he was training there’. The majority of his work with 461 Squadron consisted of anti-submarine patrols in the Bay of Biscay and convoy patrols. Richmond was the first member of 461 Squadron to fly on D-Day (where his galley primus caught fire and curtailed the mission); he spent June and July 1945 escorting surrendered U-Boats to England. He was discharged on 21 February 1946.