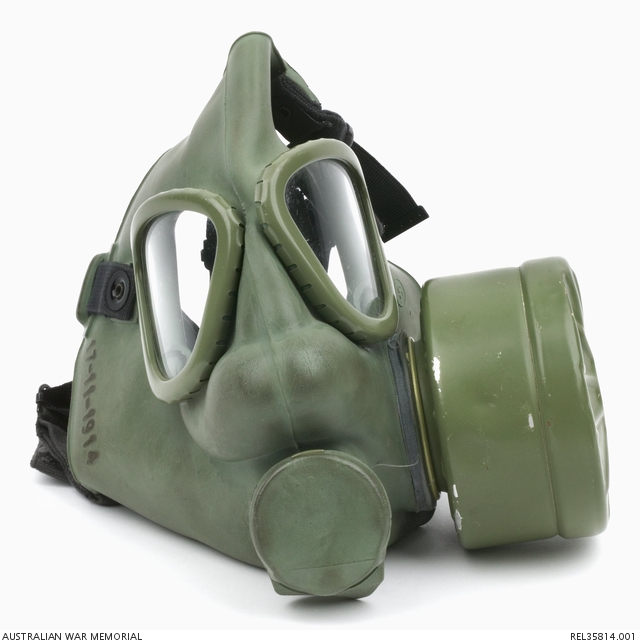 Small sized M1 gas mask made from green rubber. A pair of clear Perspex lens are each secured to the rubber face by green metal clamps. The lower front of the gas mask has a circular outlet valve. Around this valve is glued a thin piece of grey fabric tape. Over the end of this inlet is a green rubber flap. There is no cheek filter attached to the left side of the gas mask which exposes a circular gold coloured inlet. Behind this filter inlet is moulded into the rubber 'M-59' and a 'S' within a circle below. The right upper cheek has moulded into rubber '17-11-1914' and this is highlighted with black ink. On the rear of the gas mask are five black elasticised adjustable straps. The inside surfaces of the gas mask are dimpled. The filter fitted to the left cheek is scratched and dented and there is no rubber cap over central disc on the filter which exposes a small hole.

This Iraqi M1 gas mask was found during a Sensitive Site Exploitation of Al Asad Air Force base by the Special Air Service Regiment (SASR), 4 Battalion Royal Australian Regiment Commando (4RAR CDO) and the Incident Response Regiment (IRR) element on 15 April 2003. The Yugoslavian (Serbian) M1 gas mask is a copy of the US M9 gas mask. While a different color rubber was used to manufacture the mask, the overall design is an exact copy of the M9. The M1 was also issued in a similar carrying satchel. The M1 was used during the 1991 Gulf War and evidently was still in service in 2003.