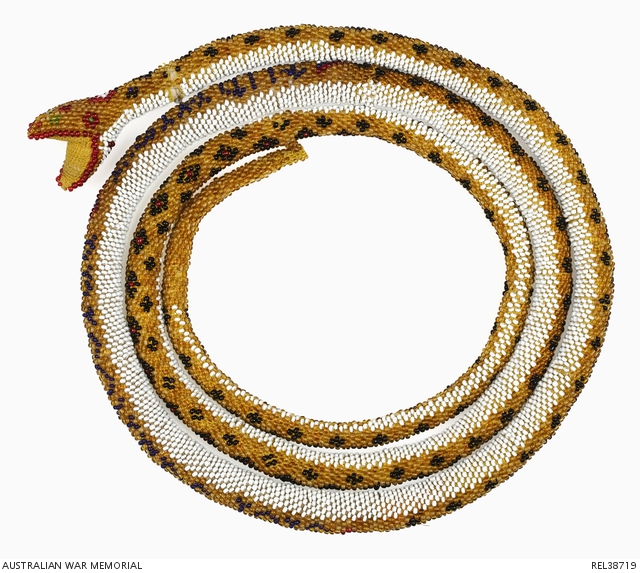 Beaded crochet snake. The snake's back and tail are yellow, the belly is white. The back has a diamond design in black and red beads, along the length of the body. The eyes are beaded in red and green. The snake's mouth is bordered with red beads, and the inside of the mouth is in plain cotton crochet work. The text 'TURKISH PRISONER 1916 ' is worked on the snake's back, 100 mm from the head, in blue beads. There is a triangle design on either side of the text and a diamond design between the words 'TURKISH PRISONERS'. There is a break near the snake's head, although the head is still attached to the body.

Beadwork snake, made by an Ottoman prisoner of war in a British camp, probably in Egypt, that was given to Jean Williams by one of her three brothers who served in the war. Two of her brothers, Lindsay and John were killed in France. Her third brother, Douglas survived the war. The snake was posted to her by Douglas or Lindsay (as both had been in Egypt in 1916), or was brought home by her surviving brother Douglas. 1589 Private Lindsay Williams enlisted on 8 March 1915 aged 22. He embarked on HMAT Geelong from Adelaide on 31 May 1915 with the first reinforcements of 27 Battalion. Williams landed at Gallipoli in early September. On 6 November he was admitted to the 7th Field Ambulance with tonsilitis. He was transferred to Mudros, where he was diagnosed with diptheria. He was transferred to hospital at Malta on 12 November. He rejoined his unit in Egypt on 13 March 1916 before embarking for France in May. Lindsay Williams was severely wounded on 4 August 1916 during an attack on positions left of Bapaume, France. He was later noted as missing and was believed to have died of his wounds. The captured German trench he was last seen in was buried by shell fire, presumably burying his remains. He has no known place of burial and his name is recorded on the Villers Bretonneaux Memorial. His brother, Douglas Gordon Williams, enlisted on 18 November 1915, aged 24. He embarked with the fifteenth reinforcements of 3 Light Horse Regiment on HMAT Anchises from Adelaide on 16 March 1916. He served in Egypt with the Australian Army Training Depot (AATD) until August 1916, when he moved to England. In October he transferred to 120 Howitzer Battery, 15 Field Artillery Brigade. In April 1917, after spending some time in hospital, he proceeded to France, where he joined 113 Battery. On 3 November, he was admitted to hospital after being gassed. Douglas Williams rejoined his unit in December and was awarded the Military Medal for his actions east of Westhoek during the morning of 29 October 1917. On that day he was one of a number of drivers from 113 Battery carrying ammunition to the gun pits. Their party came under heavy enemy shell fire and some of the men turned back. Williams and two others continued to carry the ammunition through the barrage, which inspired the others to follow. In June 1918 he was admitted to hospital with influenza and was sent back to England. After time recovering and training he returned to France in October and was promoted from gunner to bombardier. He returned to England in April 1919 and on 22 May he left Liverpool, England for Australia where he was discharged on 9 September 1919. The youngest brother, 2258 Private John Howie enlisted on 20 March 1917 aged 22 years. He embarked from Melbourne on 11 May 1917 on HMAT Shropshire with Light Trench Mortar Battery reinforcements. During the journey he was admitted to the ship's hospital twice. The first time he was there for two weeks, the second time he was admitted with the mumps. He still had the mumps when they arrived in England, and was transferred to Devonport Military Hospital after he disembarked at Plymouth on 19 July 1917. After recovering, he went to the training depot at Perham Downs. He was transfered to 10 Battalion on 29 August 1917. After further training he proceeded to France in March 1918. John Williams was killed in action on 30 May 1918 during a minor operation in the Merris Sector, France, to capture enemy posts. During the operation two officers and 20 other ranks were casualties from allied artillery that had fallen short of the enemy targets. More men were killed or wounded as the operation progressed, with the total casualties for 10 Battalion being two officers and ten other ranks (including Williams) killed; and five officers and 47 other ranks wounded. He is buried at La Kreule Military Cemetery Hazebrouck.