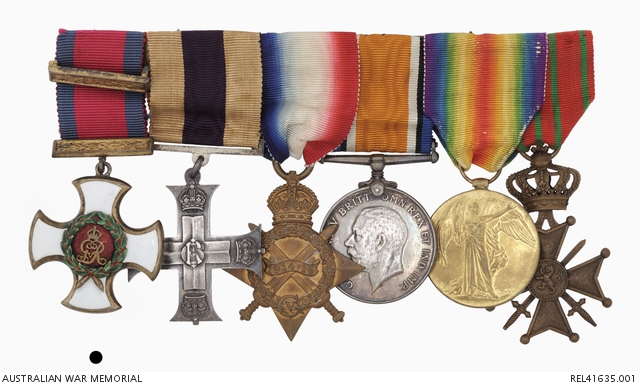 He accompanied the 5th Infantry Brigade to Gallipoli, landing on 16 August. He served on 5 Brigade’s staff until 11 December, when he transferred to 6 Infantry Brigade Headquarters as a staff captain. He was recommended for a Military Cross for his outstanding organisational ability and leadership during the evacuation of Gallipoli. After the evacuation, he returned to Egypt where the AIF spent several months before sailing for France in March.

Norman was accidentally wounded in the hand on 11 April and was evacuated to England for treatment. On 5 June, the day before he was to sail back to France, he was awarded the Military Cross.

On November 23, Norman transferred to 48 Battalion, giving up his position as staff captain. The following day, he was promoted to major and seconded to 12 Infantry Brigade Headquarters. After the fighting in Passchendaele, for which Norman was again mentioned in despatches, and the winter of 1917, 12 Brigade moved back into France to stem the advance of the German’s spring offensive in March 1918.

During the Allied advance on 8 August, Norman was recommended for and later awarded a Distinguished Service Order. His recommendation reads; ‘During operations and advance east of HAMEL on 8 August 1918. For conspicuous gallantry and stern devotion to duty. Though exposed to heavy enemy Artillery and Machine Gun fire Major NORMAN went forward and got in touch with advanced troops, ascertained their position, and established liaison between Units. This work had to be carried out under direct observation and heavy Artillery fire from the enemy holding CHIPILLY SPUR. He was untiring in his efforts and gave no though to his personal safety, his one idea being to ensure the complete success of the operation. At all times this officer showed unbounded enthusiasm, tireless energy, and exceptional devotion to duty. The magnificent example set by this officer inspired all with whom he had come into contact.’

On 25 September, Norman was seconded to the American Army, to assist them with their operations. He returned to 12 Brigade on 2 October and was again posted, this time to an officers course at Cambridge. Norman withdrew from the course in January 1919, but remained in England. He was awarded a Belgian Croix de Guerre on 5 April for his work during the Allied advance on 8 August 1918. He left England for Australia in November, disembarking in Sydney on 4 January 1920. He was discharged from the AIF in April.