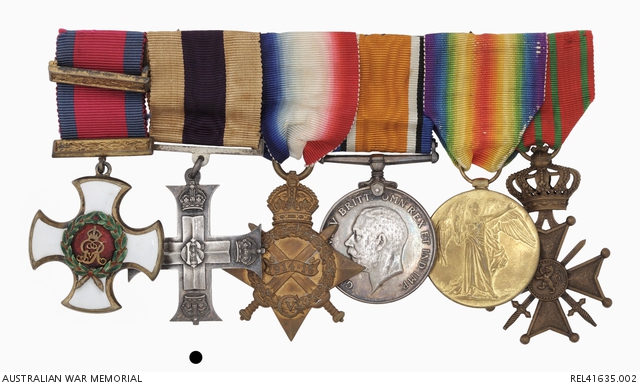 He accompanied the 5th Infantry Brigade to Gallipoli, landing on 16 August. He served on 5 Brigade’s staff until 11 December, when he transferred to 6 Infantry Brigade Headquarters as a staff captain. He was recommended for a Military Cross for his outstanding organisational ability and leadership during the evacuation of Gallipoli. After the evacuation, he returned to Egypt where the AIF spent several months before sailing for France in March.

Norman was accidentally wounded in the hand on 11 April and was evacuated to England for treatment. On 5 June, the day before he was to sail back to France, he was awarded the Military Cross. His citation reads; ‘For conspicuously good service as a capable and resourceful Staff Captain, and later as an excellent Brigade Major in France since 1916. His services have been invaluable to the Brigade and he has proved himself a cool and reliable staff officer in action. He has already been brought to notice for his services in NEW GUINEA in 1914, ANZAC in 1915, EGYPT in 1916 before joining the 6th Australian Infantry Brigade. By his ability no less than his gallant conduct he is well deserving of special recognition.’

On November 23, Norman transferred to 48 Battalion, giving up his position as staff captain. The following day, he was promoted to major and seconded to 12 Infantry Brigade Headquarters. After the fighting in Passchendaele, for which Norman was again mentioned in despatches, and the winter of 1917, 12 Brigade moved back into France to stem the advance of the German’s spring offensive in March 1918. During the Allied advance on 8 August, Norman was recommended for and later awarded a Distinguished Service Order.

On 25 September, Norman was seconded to the American Army, to assist them with their operations. He returned to 12 Brigade on 2 October and was again posted, this time to an officers course at Cambridge. Norman withdrew from the course in January 1919, but remained in England. He was awarded a Belgian Croix de Guerre on 5 April for his work during the Allied advance on 8 August 1918. He left England for Australia in November, disembarking in Sydney on 4 January 1920. He was discharged from the AIF in April.