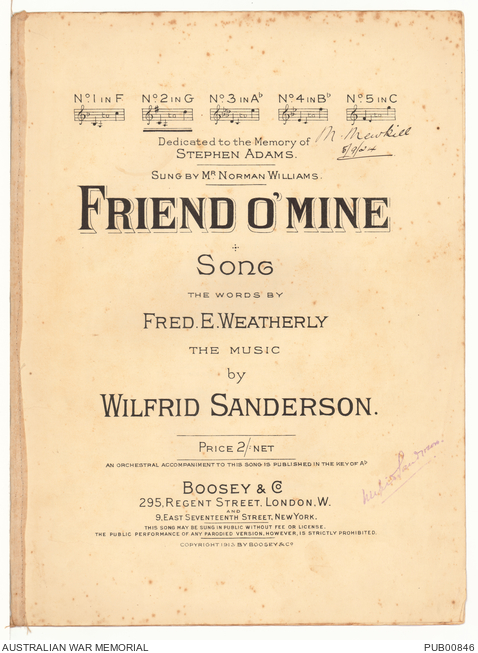 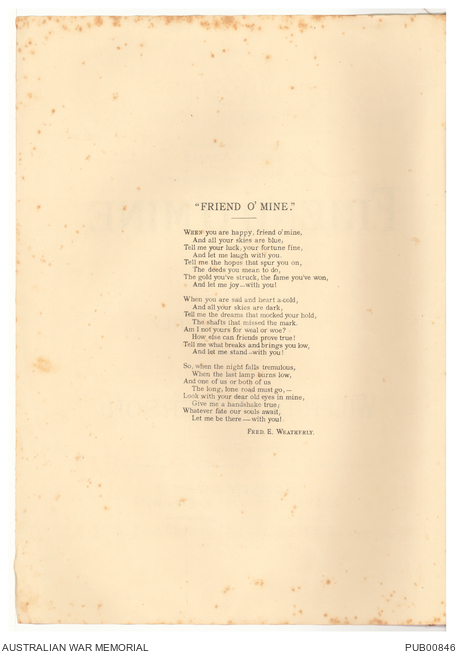 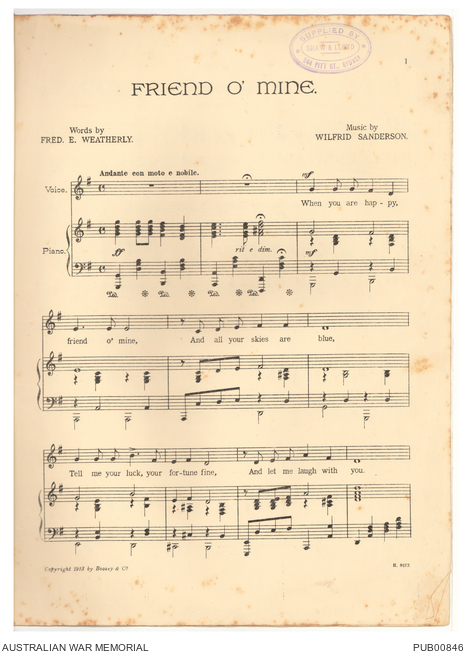 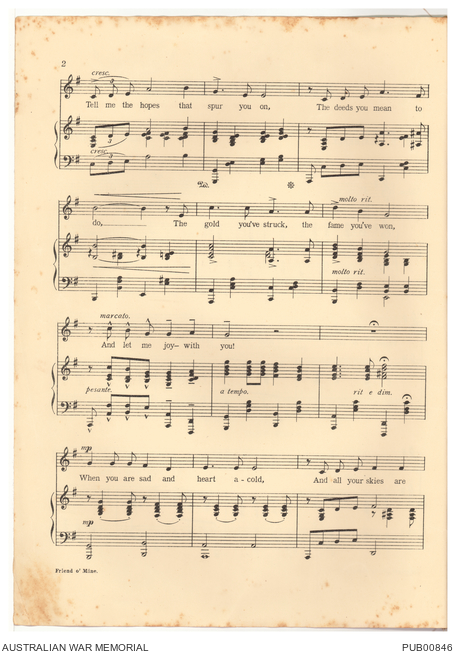 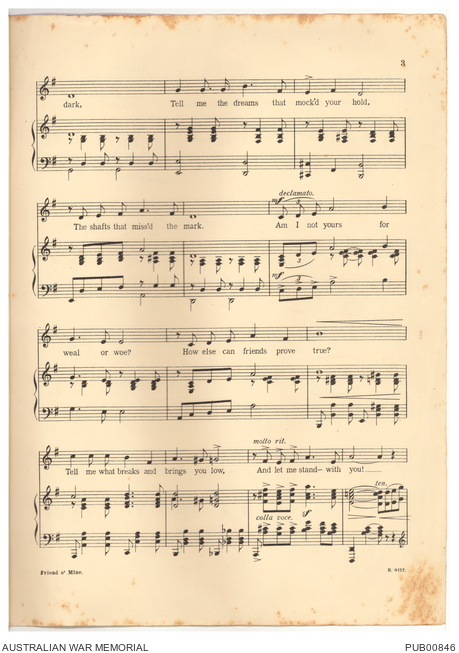 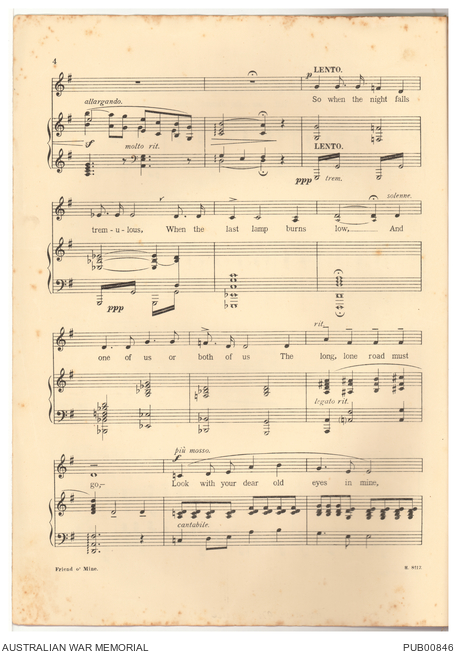 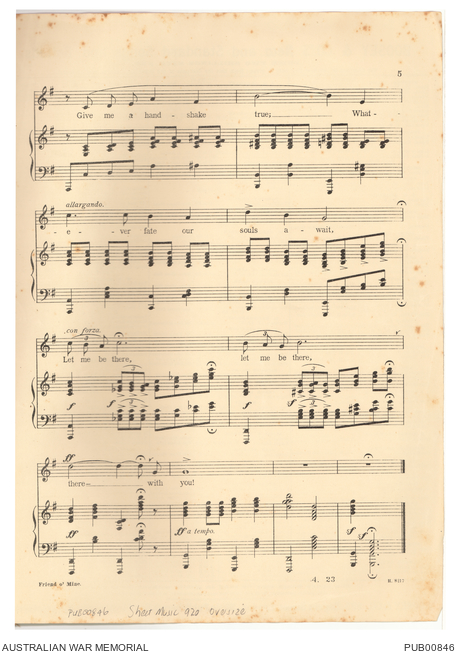 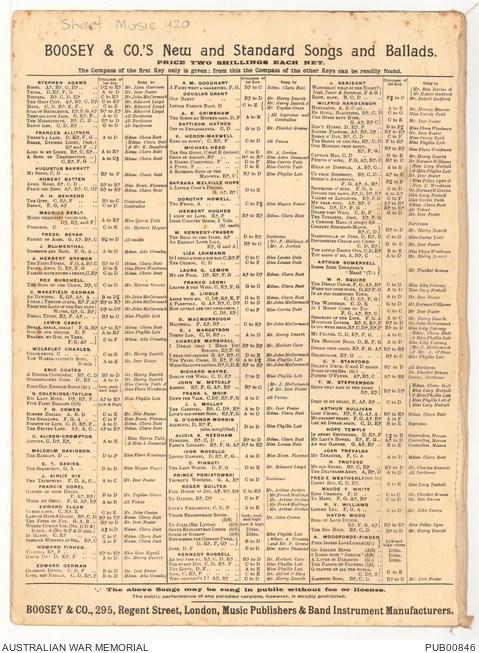 Sheet music for the song titled, 'Friend O' Mine', with music composed by Wilfrid Ernest Sanderson and lyrics written by Frederic Edward Weatherly. This copy was collected by Maude Mewkill (nee Phillips) and a note on the cover provides the date 5/9/1924. This copy of the music is published in the key of G. The printed cover states that the composition is dedicated to the memory of Stephen Adams and sung by Mr Norman Williams.

The lyrics talk about the support provided by friendship and this song became very popular just before the First World War. The poem on which this song is based, was originally written by Weatherly in 1912 for the English composer and singer Michael Maybrick. Maybrick used the pseudonym of Stephen Adams and had worked together with Weatherly on other songs. Maybrick died without seeing the poem which Weatherly passed to Sanderson, who composed the music.

In addition to being a proliferate lyricist who is said to have written the lyrics for 3000 songs, Weatherly was also an author and a lawyer. Some of his most famous songs include 'The Holy City', 'Danny Boy' and 'Roses of Picardy'. Sanderson was a a British composer and organist who was based in Doncaster, England. During the First World War, he was a senior clerk at the Ministry of Works. From 1924 until his death, he was an examiner at the Trinity College of Music. During his career he composed approximately 170 songs.

The song titled, 'Friend O' Mine', was performed at the first concert given by the Mountebanks Concert Party, 10th Training Battalion, on 4 August 1917. The concert, reported to be 'highly successful', was held in the concert hall of Number 12 camp, Durrington, and supported by Company 318, ASC Orchestra. This performance of the song was given by Jock Thompson, a baritone singer. Thompson was born in Scotland and arrived in Australia in 1910 where he based himself in Brisbane before enlisting in the AIF. During the war, he served with the 42nd Battalion and was also a member of both The Cooees Concert Party and The Smart Set Concert Party.

This song was also performed in several concerts given by Australian units while on active service in France and also on troopships. Gunner Roderick Michael Tiernan was amongst this group of performers, with his version of the song performed at the 7th Australian Field Artillery Brigade's Christmas concert at Hautmont, France, on 25 December 1918. Another performance of this song during the First World War period was given by Sergeant Adcock during a concert held at the Field Bakeries Sergeants' Mess in North Rouen, France during Christmas 1916. On this occasion, the song was titled 'Mate o' Mine'. Lieutenant Eric Mattherson performed the song during a concert held to entertain troops returning to Australia after the war aboard HMAT Karmala on 8 August 1919. Private Percy Payne was another soldier to do this during a concert aboard HMAT Soudan on 10 June 1919.

This song was also popular in the United Kingdom with appearances of the song in concerts given by British units as well as at concerts in London. One of these performances was given by W Pinder, Royal Air Force, at a concert in North Rouen on 3 May 1918. In London, Miss Rene Maxwell performed the song during a concert for overseas officers at Haberdasher's Hall, London, on 26 April 1918.