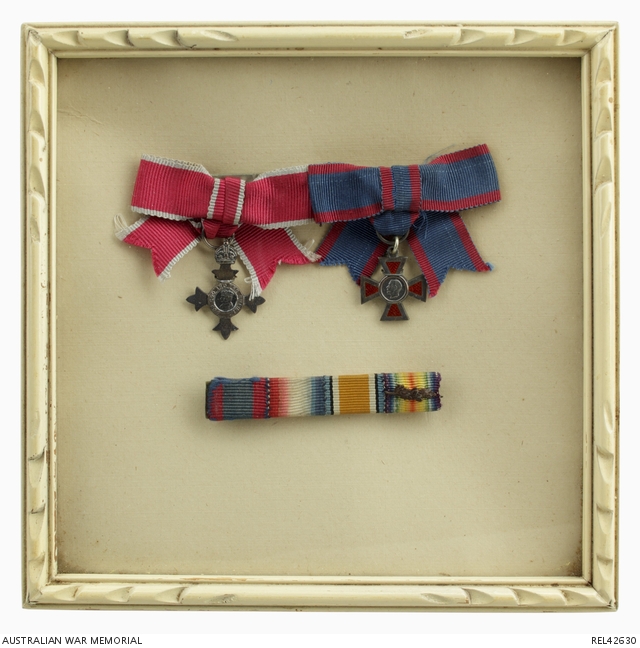 Associated with the service of Matron Elizabeth Mosey, who was born in Robertstown, South Australia on 23 March 1880. After finishing school, Mosey became a nurse and when the First World War began, she enlisted in the Australian Army Nursing Service on 29 November 1914. She was posted as a staff nurse to 2 Australian General Hospital (2 AGH).

Mosey embarked from Melbourne aboard HMAT A55 Kyarra on 5 December arriving at Egypt in early February 1915. 2 AGH was based at Mena on the outskirts of Cairo and it was here that Mosey served during the Gallipoli campaign. On 1 December 1915, she was promoted to Nursing Sister.

She was admitted to 4 Auxiliary Hospital on 23 February 1916, suffering mumps remaining there for just over a week. Mosey sailed at the end of the month with the AIF to France. 2 AGH was initially based at Marseilles, but later moved to Wimereux. Mosey was detached for duty with 23 General Hospital at St Omer on 17 June. On 14 July, she was awarded a Mentioned in Despatches for her administrative work in Egypt. Mosey returned to 2AGH at the end of September. On 11 November, Mosey went on leave to England. She spent two weeks there before returning to 2 AGH at the end of the month.

Mosey was detached for duty with 1 Australian Casualty Clearing Station in February 1917. She served with this unit treating wounded men from the Battles of Messines and Ypres. She returned to 2 AGH on 5 November before proceeding to England on leave a week later. On 28 November, Mosey reported for duty to 1 Australian Army Hospital at Harefield, though two days later she was admitted sick to the Australian Nurses Home at St Albans. She returned to duty at 1 AAH on 22 December.

Mosey was awarded the Royal Red Cross Second Class for; 'Most distinguished and devoted services to the sick and wounded, especially those of the Battle of Messines and of the 3rd and 4th Battles of Ypres, and upon all occasions. Mention, August 1915 in Egypt.' She was presented her medal at the same ceremony that one of her patients, Private Henry Dalziel, was awarded the Victoria Cross (See photograph H00047).

Mosey remained with 1 AAH until the end of the war and embarked for Australia aboard City of Exeter on 15 January 1919. She disembarked at Adelaide on 25 February and was discharged from the AIF on 23 June. Not content to return to civilian nursing, Mosey signed up for service with the Australian Naval and Military Expeditionary Force. She embarked from Sydney aboard SS Marsina on 16 April, taking up her post at the hospital in Rabaul shortly after.

On 13 November, Mosey became the Matron of the hospital. She retained this post when in 1921 the administration of the former German territories switched from military to civilian. She returned to Australia in May for a furlough before returning to Rabaul.

It is unclear when she finally left Rabaul, but following her time there, she began nursing in Asia. Just prior to the Second World War, Mosey was working as a volunteer nurse in Hong Kong. When war broke out and the Japanese invaded, she was trapped along with the civilian populace. She spent the next six years tending to the people of Hong Kong.

Following the war, she returned to Australia and in 1947 was created a Member of the Order of the British Empire for her service to the people of Japanese occupied Hong Kong.