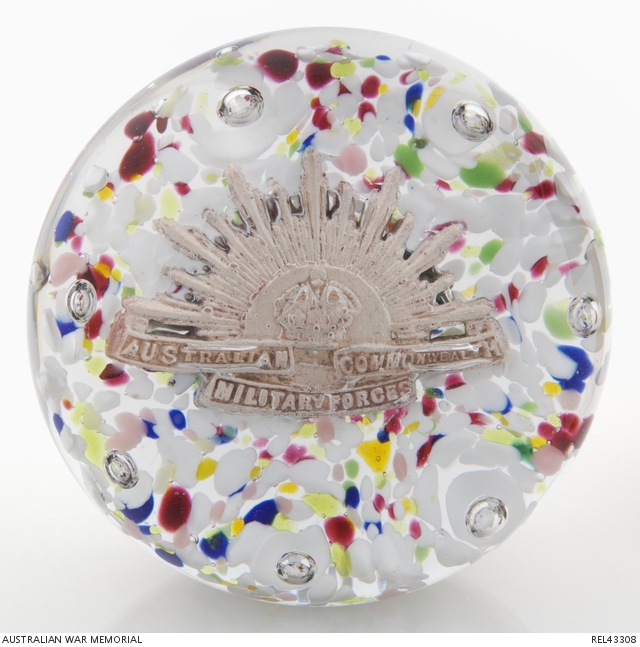 Standard size domed glass paperweight with cast sulphide inclusion in the form of an Australian Rising Sun collar badge, set on a bed of lamp worked coloured glass chips. The whole is cased in clear glass with air bubble inclusions positioned around the circumference as well as over the badge, enhancing the three dimensional effect. The finished product has been cut and ground to allow it to sit either on its base or on its side for display purposes. There are no signatures or markings on the base.

French glass art paperweight made for 7309 Orderly Room Sergeant William Lambert, 2 Australian Casualty Clearing Station (2 CCS), a clerk of Burnley, Victoria, who enlisted on 19 April 1915, aged 35. He embarked for overseas service on 23 November, as a reinforcement for 2 CCS, aboard the transport HMAT 'Ceramic'. He joined his unit in France on 16 June 1916 for 10 days. He was made acting Company Quartermaster on 8 March 1917; a position in which he was officially promoted to on 11 May.

Overall, the quality of this piece suggests it is the work of a competent glass blower rather than a master glass craftsman - the scattered glass chips attempt to imitate the earlier use of millefiori glass rod canes, while the placement and size of the air bubbles is uneven. The base and pontil are roughly polished, suggesting a quick job.

Nonetheless, it is a unusual souvenir of wartime France, considering that all the major art glass works (for example St Louis and Baccarat) had closed for the duration of the war.