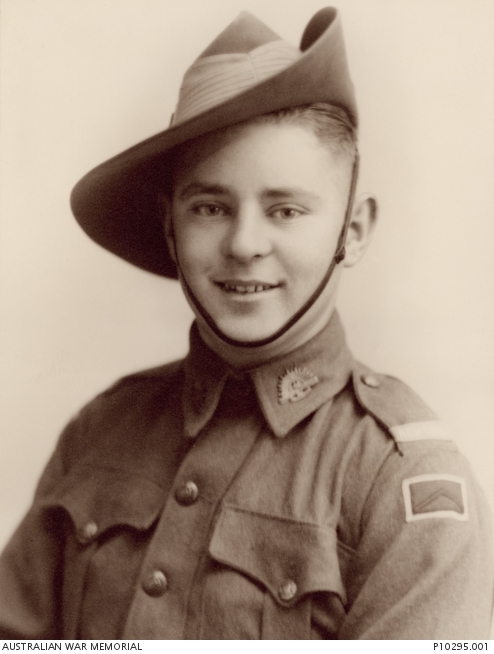 Studio portrait of V144024 Private Laurence Raymond Grose, 10 then 23 Heavy Anti-aircraft Battery, RAA. Pte Grose, whose real name was Douglas Grose, was a labourer from Melbourne when enlisted on 28 November 1941. He was only 16 so put his age up and used a variation of his brother's name. His brother, VX57372 Lawrence Raymond Grose, had enlisted in June 1941. Douglas Grose served in New Guinea on the unit's 'Strawberry Blonde' gun from January 1942 until it was discovered that he was underage. The Army had investigated the Grose enlistments when it was found that their mother was receiving allotments from two sons named Laurence and Lawrence Grose. Douglas Grose returned to Australia in September 1942, suffered a fractured tibia in December and was discharged on 5 February 1943. He enlisted in the RAN under his own name and correct date of birth on 9 November 1943. PM6971 Able Seaman (AB) Grose saw active service on HMAS Manoora from June 1944. In September the Manoora transported troops to Morotai before landing American troops in the Philippines, at Leyte and at Lingayen. In April 1945 the Manoora carried her first Australian troops and cargo to landings on Tarakan, on Green Beach, Brunei, and at Balikpapan in June. Between September 1945 and April 1946 the ship repatriated Australian soldiers from New Guinea, New Britain, Morotai and Borneo. AB Grose was discharged from the RAN on 2 August 1946, aged 20. Later in life Douglas Grose attached a handmade nameboard titled 'HMAS Manoora' to every house he owned. (See also P10295.002 and 055038.) Items of of AB Grose's RAN uniforms are held in the National Collection of the Australian War Memorial. (See REL31885.001-REL31885.006 and REL31886.)