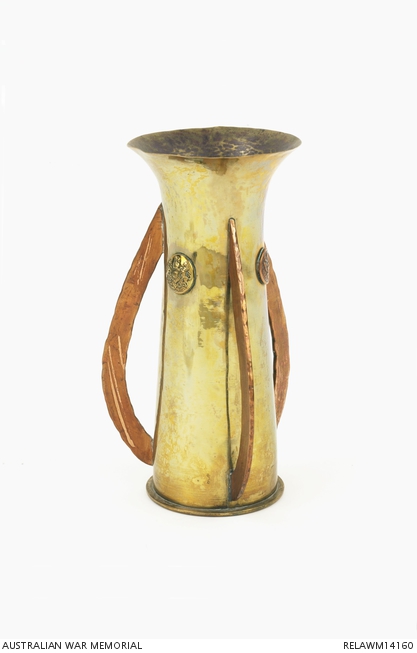 Trench art dahlia vase made from a brass German 77mm shell case. The shell has been been hand beaten and narrowed slightly towards the top and then flared out at the rim. The vase has been decorated with a steel Prussian button, a brass British General Service button and an American button. There are three flat copper handles equally around the vase. The base of the shell case is impressed 'FN 144 1918 Hl 27'.

This vase is part of a collection of trench art made by 6756 Sapper Stanley Keith Pearl, a Tasmanian who served with 5 Field Company Engineers, AIF. He enlisted for service on 9 November 1915 and returned to Australia on 21 March 1919. Pearl subsequently moved to Canberra where he was employed as a carpenter at the Australian War Memorial. He supplied the following information about the dahlia vase,'Made on the Somme in November 1918 from a German 77mm shell-case found at Cappy. It is ornamented with British, American and Prussian buttons and its handles are window bars retrieved from the ruins of Ypres Cathedral.'