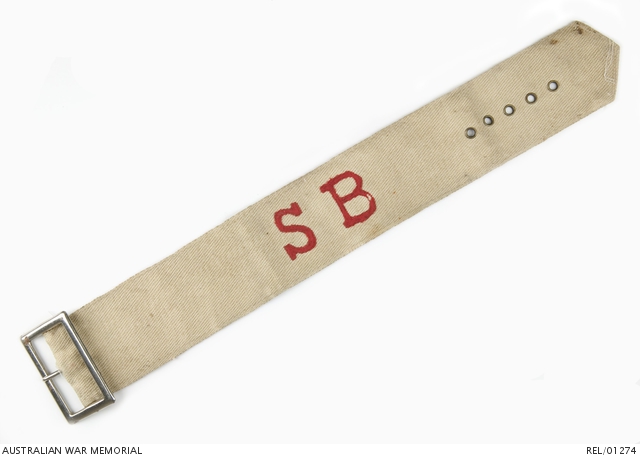 White woollen brassard (arm band), lined with white linen, with a nickel plated metal buckle, and five brass riveted eyelets at the free end for size adjustment. The letters 'SB' (stretcher bearer), in fine red wool cloth, are appliqué in the centre. The reverse has the wearer's initials 'A.K.' in indelible pencil.

Kennedy was evacuated to a casualty clearing station on 5 September and then on to 18 (British) General Hospital at Camiers. There, his condition fluctuated, improving by 2 October, dangerously ill two weeks later, and then improving on 24 October. It is unclear form his records whether one or both of his legs was amputated, but an amputation took place on 16 November. A decision was made to try to transfer him to England by easy stages and he was moved about 4 miles to the St John's Brigade Hospital near Etaples at the end of November. However, infection set in and he died there of septicemia at 12.15 a.m. on 2 December.