Next of Kin Plaque : Lance Corporal A Kennedy, 52 Battalion, AIF 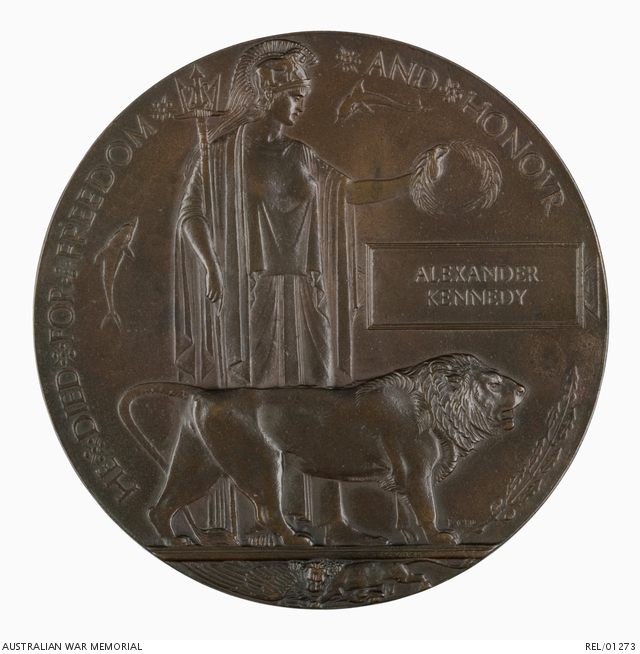 Bronze next of kin plaque showing on the obverse, Britannia holding a laurel wreath, the British lion, dolphins, a spray of oak leaves and the words 'HE DIED FOR FREEDOM AND HONOUR' around the edge. Beneath the main figures the British lion defeats the German eagle. The initials 'ECP', for the designer Edward Carter Preston appear above the lion's right forepaw. A raised rectangle above the lion's head bears the name 'ALEXANDER KENNEDY'.

Kennedy was evacuated to a casualty clearing station on 5 September and then on to 18 (British) General Hospital at Camiers. There, his condition fluctuated, improving by 2 October, dangerously ill two weeks later, and then improving on 24 October. It is unclear from his records whether one or both of his legs was amputated, but an amputation took place on 16 November. A decision was made to try to transfer him to England by easy stages and he was moved about 4 miles to the St John's Brigade Hospital near Etaples at the end of November. However, infection set in and he died there of septicemia at 12.15 a.m. on 2 December.

This plaque was sent to Kennedy's eldest sister in 1922, who, together with her father, had raised her four siblings after her mother's death in 1901. Although it would normally have been sent to Kennedy's closest male relative (his father died in 1918), his younger brothers asked that medals and next of kin plaque be forwarded to their sister in recognition of the role she played in keeping the family together, and the authorities complied with their request.