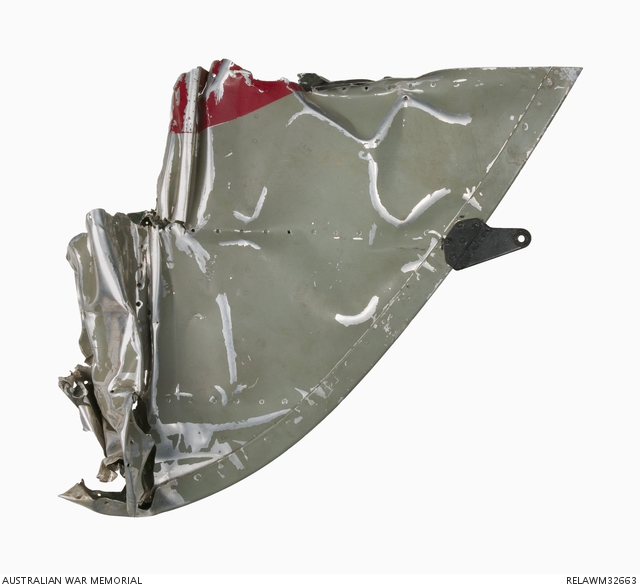 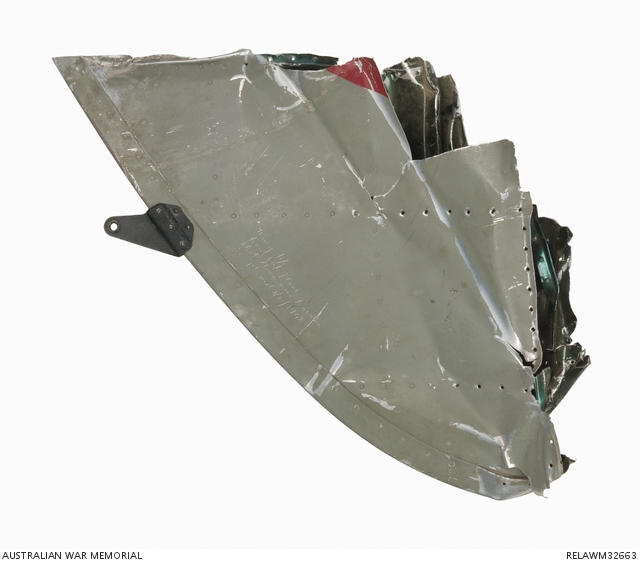 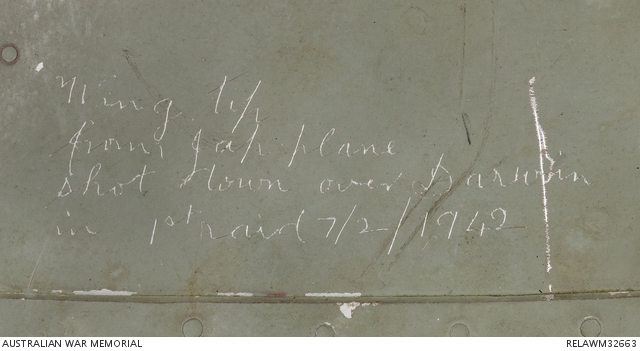 Trailing edge of wing tip of an Aichi D3A1 'Val' dive bomber. The wing section is made from aircraft grade aluminium, is of rivetted construction and is painted grey with extensive chipping and scratching. On the trailing edge of the wing tip is a black attachment for an aerial which would have also been attached to the fuselage. Scratched into one side of the object is 'Wing tip from Jap plane shot down over Darwin in 1st raid 7/2/1942'. A partial red painted section from the wing 'hinomaru' or rising sun marking is visible where the wing tip separated from the wing. The wing tip shows significant impact damage.

Early on the morning of 19 February, 188 aircraft were sighted by observers on Bathurst and Melville islands to Darwin's north. The attack on Darwin began when Zero fighters began strafing an auxiliary minesweeper, HMAS Gunbar, as it passed through the boom protecting the entrance to Darwin harbour. Soon, ships in the harbour and buildings and installations ashore came under attack. For forty minutes the aircraft bombed and machine-gunned the harbour and town. They shot down nine of the ten United States Army Air Force P-40E Warhawks over the town and sank eight of the 47 ships in the harbour, including the motor vessel Neptuna. Its cargo included 200 depth charges which exploded as the ship lay beside the Darwin wharf. Another victim was the US Navy destroyer USS Peary which sunk with great loss of life.

This trailing edge of a wing tip is from a Aichi D3A1 'Val' dive bomber shot down during this first Japanese air raid on the Australian mainland. The aircrew of this aircraft were the pilot, Petty Officer First Class Takezo Uchikado and the radioman/Shotai leader/aircraft commander Chief Petty Officer Katsuyoshi Tsuru. The unique tail code markings in red paint on this 'Val' was AII-254. Around the rear fuselage also in red paint were two vertical lines wrapped around the entire fuselage; these were the markings of the Shotai (flight of three) commander's aircraft.

The Aichi D3A1 was a 2 seat carrier based dive bomber also known as a Navy Type 99 attack carrier bomber model 11 or 'kanbaku' in the contemporary Japanese naming. Later in the war this aircraft type was codenamed 'Val' by Allied intelligence. The 'Val' was the Imperial Japanese Navy's main type of land and sea based dive bomber for the majority of the Second World War. This particular aircraft was launched from the Imperial Japanese Navy aircraft carrier 'Kaga'. This was the only Imperial Japanese Navy aircraft that physically crashed on the Australian mainland during this attack. An artwork of the crash site was completed by the official war artist Roy Hodgkinson and it is held within the National Collection as ART21687. The Japanese kanji markings on the tail he has captured in this artwork are unknown.

This aircraft was one of four known Imperial Japanese Navy crashes resulting from the raid on 19 February 1942, including the well known Mitsubishi A6M2 Reisen 'Zero' fighter coded 'BII-124' piloted by Hajime Toyoshima from the aircraft carrier 'Hiryu' which crash landed on nearby Bathurst Island.

This aircraft is believe to have been brought down by Lewis machine gun fire from the militia 2nd Heavy Anti-Aircraft Battery (2HAA) close to town and was accessible to souvenir hunters. It crashed on land south of the naval radio station HMAS Coonawarra, near Berrimah. Gunner Wilbert Thomas 'Darky' Hudson was credited with shooting down the aircraft. For this act of gallantry he was awarded the Military Medal. Eighty minutes later a second wave, this time of land-based Japanese Navy bombers from Kendari in the Celebes, arrived to continue the attack, this time concentrating on the inland RAAF station.

The two raids killed about 250 people in and around Darwin (in addition to wounding approximately 350 people) and they were the first of sixty four raids and reconnaissance missions made on Darwin between February 1942 and November 1943. However none of these raids were as heavy as the first, and most caused no damage or casualties at all.