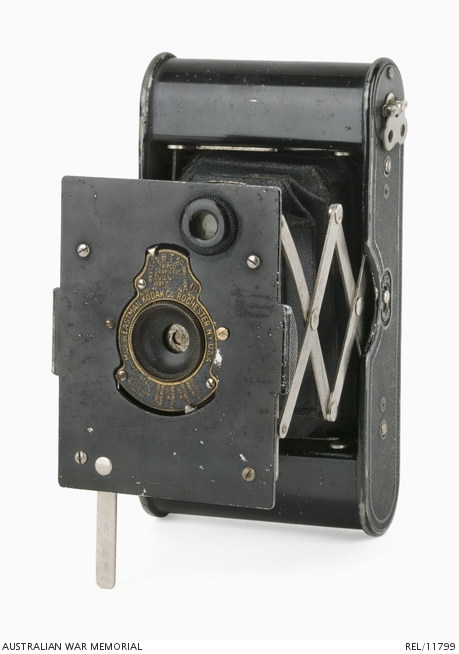 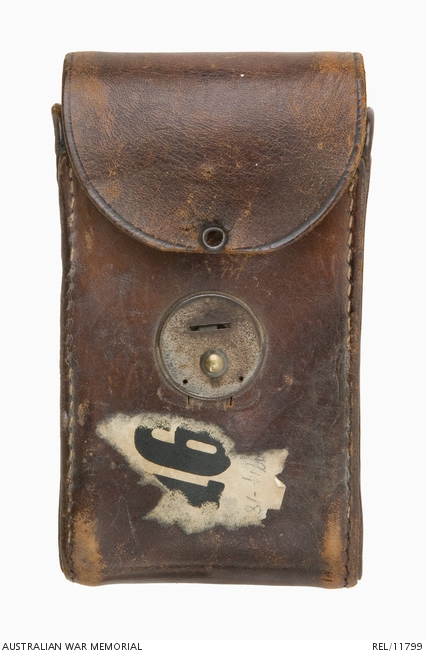 Kodak Vest Pocket Autographic Camera and brown leather case. This folding camera has a painted black aluminium body with rounded ends and brass fittings. It is opened by extending the front plate which connects the lens housing to collapsible paper bellows. There is a swivelling viewfinder to enable photographs to be taken in portrait and landscape formats. On the back of the camera is an exposure counter and the autographic feature, with a hinged flap secured with a stylus. The camera is fitted with a Kodak ball bearing shutter and uses roll film type 127. The brown leather case has a flap opening secured by a metal catch, part of which is missing. Written on the inside of the flap is 'V 127'. There is a belt loop on the back fastened with metal studs.

Associated with the service of 18752 Gunner John Edmond Wallace ('Wallace') Tindale. Tindale enlisted with 7 Field Artillery Brigade, and left Sydney aboard HMAT Argyllshire in May 1916 as a corporal in 26 Battery. The brigade arrived in England on 11 July, and after training for some months in Wiltshire, travelled to Le Havre, France, disembarking on 31 December 1916. On 23 May 1917, the battery was engaged in a preparatory bombardment for the attack on Messines, and Tindale, aged 18, was wounded in the head by retaliatory shellfire. He was taken to 2 Australian Casualty Clearing Station, where he died later that day. Wallace Tindale is buried in France at Trois Arbes Cemetery, Steenwerck.