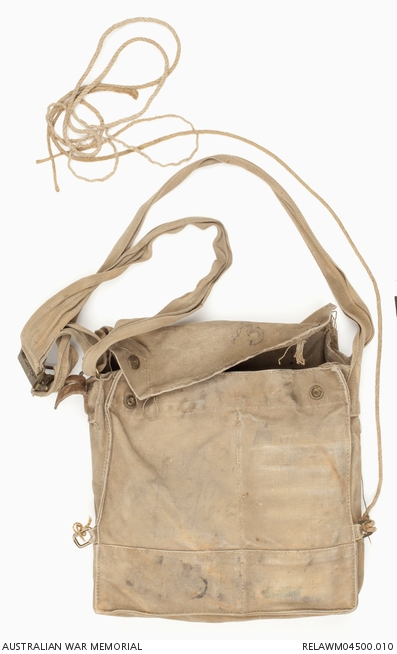 Khaki canvas haversack designed to hold the British Small Box Respirator. The haversack is roughly square, and has a top flap secured by a pair of brass press studs. The bottom section of the bag is reinforced with a second layer of canvas. A khaki cotton webbing strap approximately 110 cm long, with a brass adjusting clip at the right hand end, allows the haversack to be suspended around the wearer's neck. A brass stud halfway along the webbing strap enables it to be secured, when not in use, to a leather tongue on the right hand side of the bag. A pair of brass rings, one on either side, are located about two thirds of the way down the front. These enable the haversack to be securely located around the body via a length of twine, preventing excess movement when the respirator is being worn. Inside the top flap are stamped in black: a Broad Arrow marking; a black stencilled number '4552'; and a manufacturer's marking 'H.G. & R. Ld 17'. Other pencilled markings inside the flap are no longer legible. The outside of the flap is marked '3', indicating that the haversack was issued with a large size box respirator. The haversack is split internally into two compartments by a canvas divider, that on the right being slightly larger and designed to hold the respirator facemask and hose. The compartment on the left is intended to hold the respirator canister, and has a metal rack sewn in at its base, producing a cavity for air being inhaled through the bottom of the canister. Mud is adhered to the base and sides of the haversack.

This haversack was collected from 4172 Private George James Giles of the 29th Battalion. On 29 July 1918 the 5th Australian Division successfully attacked the German positions at Morlancourt, taking two lines of trenches, 128 prisoners and 36 machine-guns. After the attack Giles was taken from the front line and told to walk four miles to 8th Brigade Headquarters. Two photographs, covering front and rear, were taken of Giles, along with Private John Wallace Anderton of the 32nd Battalion, who had been brought off the line for the same purpose. The two men were then taken to the Deputy Assistant Director Ordnance Service, where they handed over all of their uniform and equipment, and were provided with fresh kit. The uniforms were then handed over to the Australian War Records Section for their collection. These uniforms were part of a plan, first raised in February 1918 by Charles Bean and Captain John Treloar, to collect twenty full uniforms, so that the future Australian War Memorial could, ‘show how our men came out of the trenches’. Giles’ uniform was full of holes and encrusted in mud, from the summer rains that occurred in the region in the days before their attack. Originally displayed on a figure entitled 'Out of the Line' in the original Australian War Museum in Melbourne, the uniform and equipment have been displayed almost continuously at the Australian War Memorial since its opening in 1941.