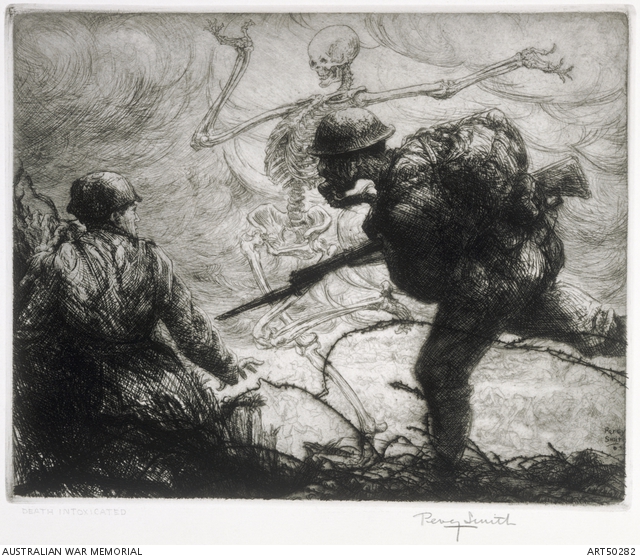 No. 7 from a portfolio of 7 etchings, titled 'The dance of Death', features Death as a tangible image hovering ominously over the battlefield. The concept of dance of Death imagery began as a medieval allegory on the universality of death and the all-conquering and equalising power of death.
In this etching 'Death intoxicated', a British soldier wearing a gas mask is poised to bayonet a German soldier emerging from a trench on the left of the composition. The German is unarmed and has his back to his assailant. Death, personified as a dancing skeleton, appears with obvious delight. In the background there are violent scenes representing the action on the battlefield in full flight.
Percy Smith was a painter, calligrapher and book designer. He began to etch in 1913. He served as a gunner in the Royal Marine Artillery on the Somme during the First World War. He surreptitiously made drawings of his war experiences while at the Front and because of this was arrested twice as a spy. Etching plates were smuggled out to him between the pages of magazines.