[Sheet music] Over there 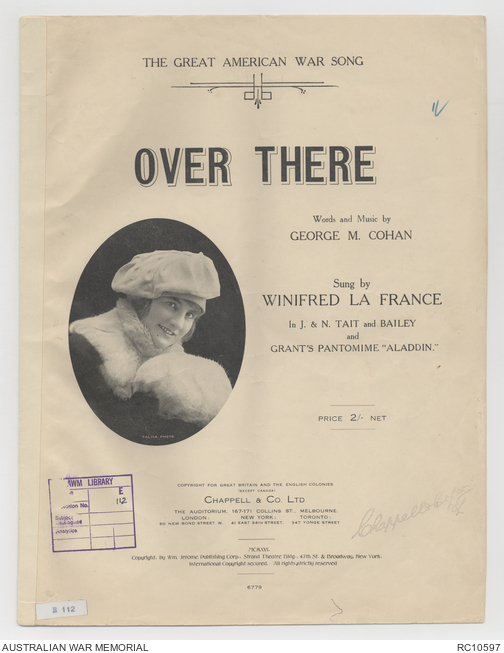 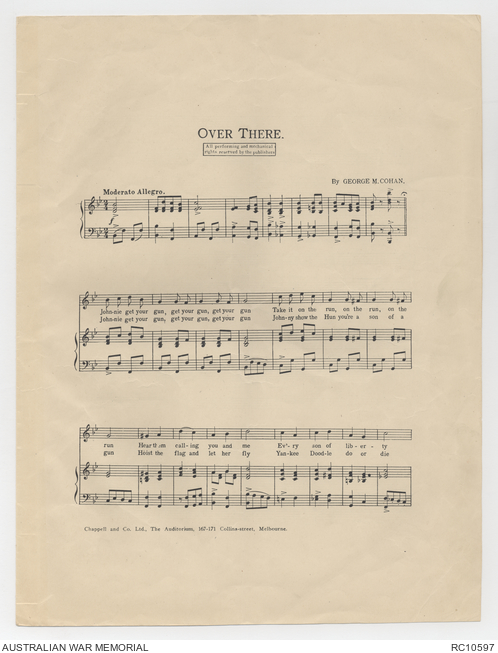 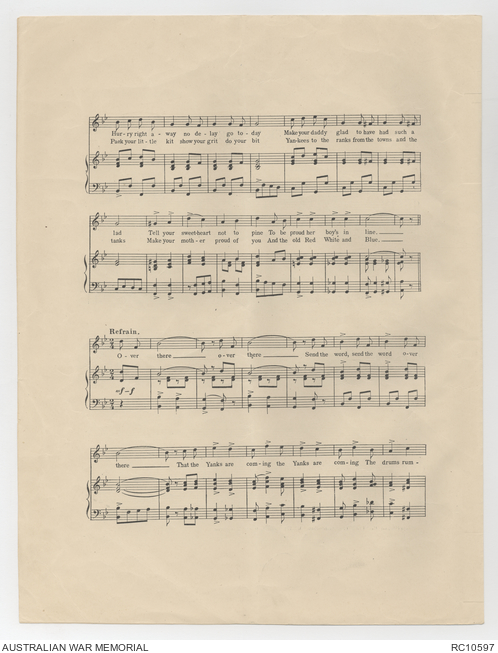 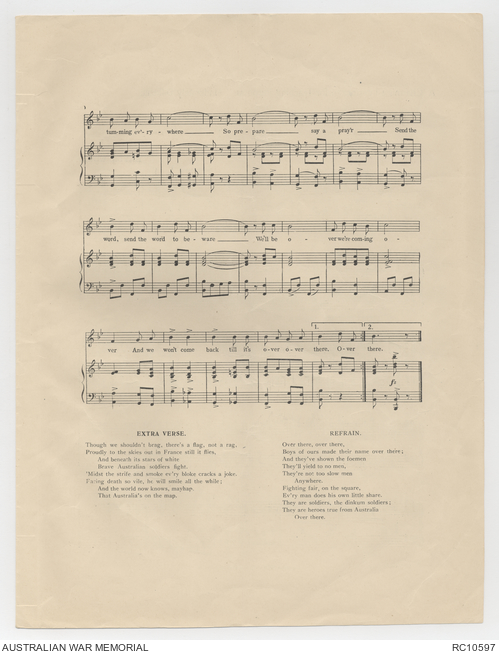 Sheet music for the song titled 'Over there', with words and music composed by George M Cohan. The song was written in April 1917, after Cohan heard the news that America had entered the war, and reportedly took about half an hour to write. Other reports imply that he recieved 25 000 pounds for the manuscript.

This edition features a copyright date of 1916 on the cover, with 1917 printed on subsequent pages. This copy of the sheet music features a photograph of Winifred La France on the cover and sold for 2/-. France performed this song in the pantomime, Aladdin, written by J&N Tait, Bailey and Grant who secured the Australian rights to the song and paid 5000 pounds for the privilege. This is the Australian version of the song, which features an extra verse, and was published by Chappell & Co Limited, Melbourne. This edition describes the song on the front cover as 'The great American war song' and reserves all performing and mechanical rights for its reproduction. This edition also features advertising excerpts for two songs written by Hadyn Wood titled 'Silver Clouds' and 'A love song'. An advertising preview for another song, written by Frederic Weatherly and Don Coates, titled 'Our little home', appears on the back cover.

George Michael Cohan was the composer of 'Yankee Doodle Dandy' and had been part of a family vaudeville act, with his parents and sister, called The Four Cohans. By the age of eight he was playing the violin and performing as a dancer. He produced his first successful musical, 'Little Johnny Jones', in 1904 at the age of 26. His first song, 'Why did Nellie come home', was published ten years earlier. Over the course of his career, he produced more than 40 musical plays with several of these appearing on Broadway. There is now a statue erected in his honour in New York City.

The song titled 'Over there', was popular with Australian audiences during the First World War. One of the earliest mentions of this song was its inclusion in the J&N Tait, Bailey and Grant Christmas pantomime, Aladdin, that featured at the Criterion Theatre, Melbourne in December 1917. The same show also opened at the Palace Theatre, Melbourne, on 9 March 1918.

Approximately a month later, the song featured in an article which referred to it as the American equivalent of 'It's a long, long way to Tipperary' and described the song as: "it proves as simple as simple can be. It begins with a very familiar quotation, in the shape of 'Johnnie get your gun' (with a slightly altered note value), and the main burden of the martial refrain partakes of the character of a fanfare." The article continues on afterwards to muse and reflect on what makes a song successful and points out that this song was heard in every military training camp across America and played at all the recruiting parades.

The song was also popular with bands and concert parties in Australia during the First World War. The song was performed by the Berrybank Concert Company at Terang on 29 January 1918. It was also selected by W S May, conductor of May's Adelaide Band, for a performance at the Elder Park rotunda, Adelaide, on Sunday, 24 March 1918.

This song was known of by Australian service personnel who were serving with the Australian Imperial Force during the First World War. Henry Leslie Williams, performed this song with the Anzac Coves Concert Party at Jubilee Hall in Weymouth, England, on 21 February 1918. The song was also performed during a concert by The Bluebells, under the direction of Miss Grace Harris on 1 December 1918. This concert was attended by Edward White Moncrieff, who served with the 45th Battalion.