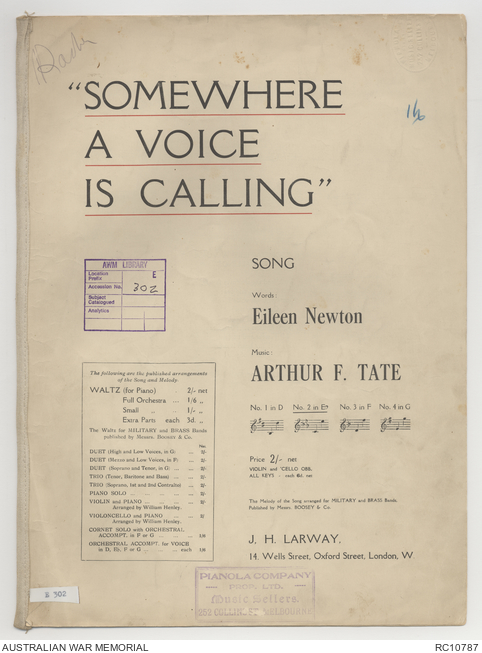 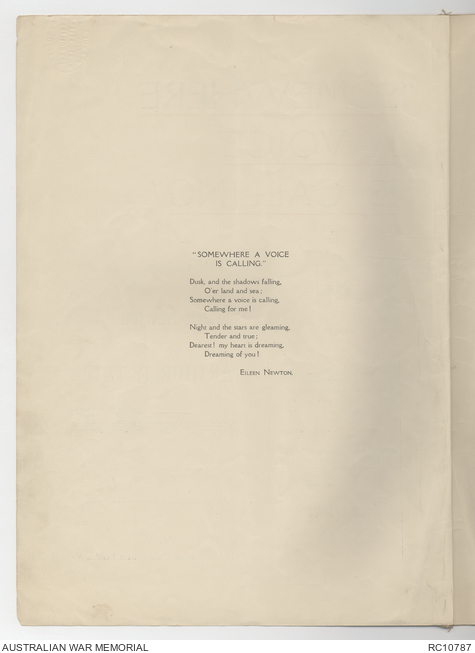 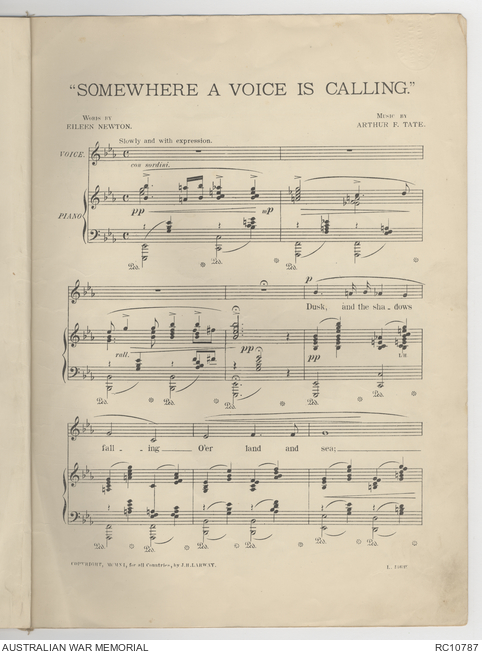 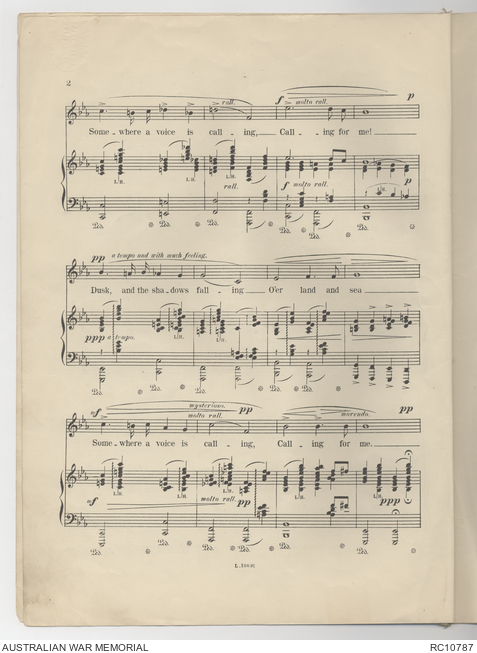 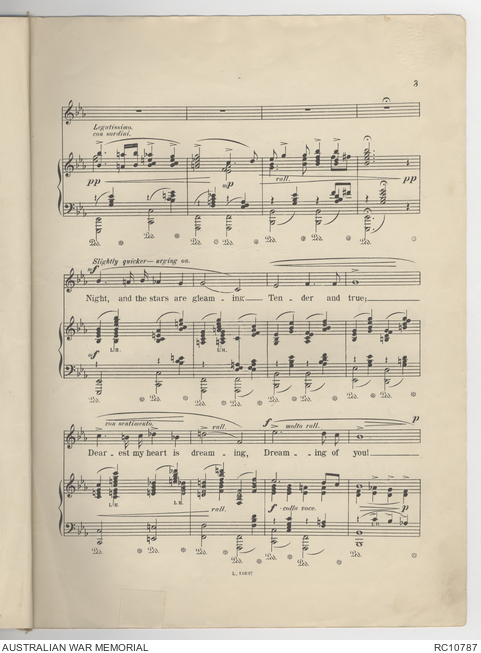 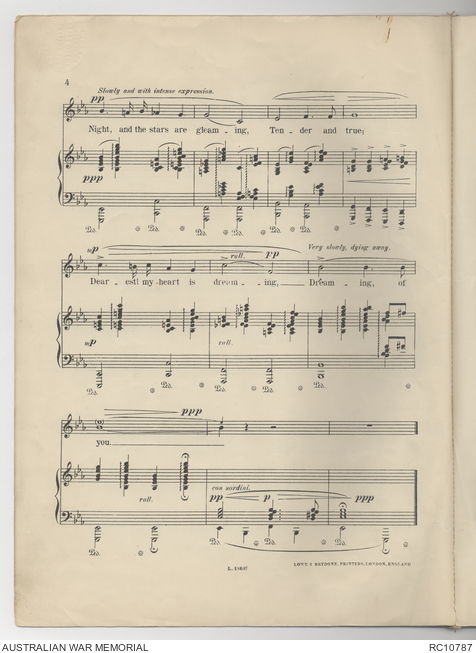 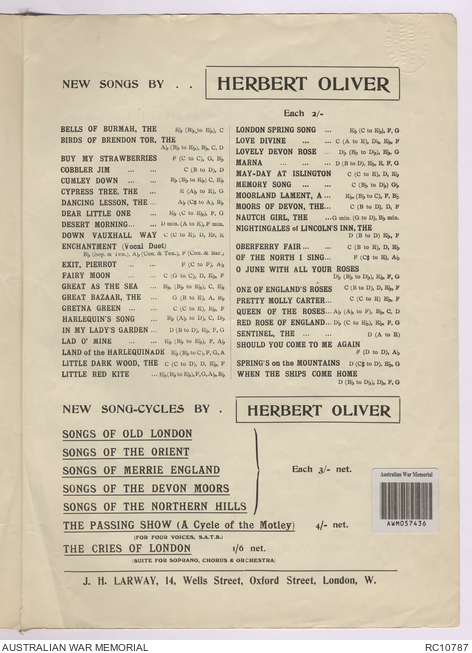 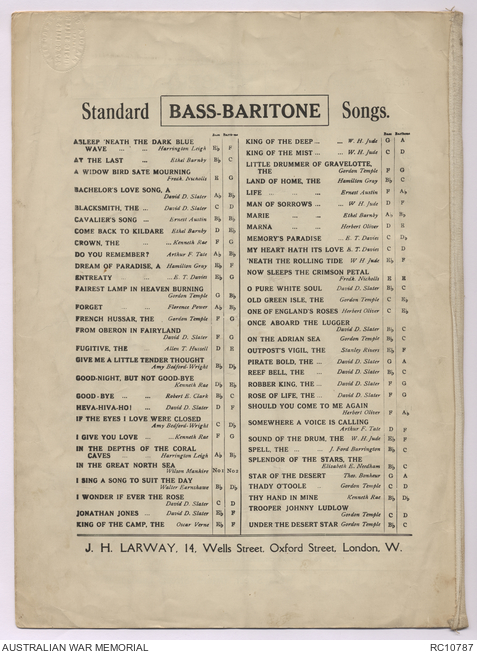 Sheet music for the song titled, 'Somewhere a voice is calling' with music composed by the British composer Arthur F. Tate and lyrics written by the British poet Eileen Newton. This copy of the music has been published in the key of E flat by J H Larway, of Oxford Street, London. The last two pages of this copy feature lists of new titles by Herbert Oliver and bass/baritone titles available from the publisher, Larway.

The lyrics describe a twilight scene when thoughts have turned to dreams of loved ones, calling from far away. In 1917, Tate wrote an article about the art of song writing with reference to why 'Somewhere a voice is calling', was such a popular song. He commented that the song was written 'by chance', while he was on holiday in Whitby, England. The music took less than an hour to write down and the words were later added by Eileen Newton.

The song titled, 'Somewhere a voice is calling', was a very popular song during the First World War. Many performances of this song occured during this period in both Australia and England. The song also featured in performances by soldiers in the field as well as on troopships.

Reports of this song first start to appear in Australian newspapers about June 1912 with the descriptions of 'Everybody's favourite' and an 'enormously popular song'. By 1914, it was 'world famous' and featured in many patriotic concerts held during September 1914. One of these was a Red Cross concert held at the School of Arts, South Grafton, New South Wales, on 1 September 1914 where it was performed as an encore by Miss K V Walker. Performances of this song continued at concerts in Australia through to 1918.

The song was also popular at events held to support and entertain soldiers during the First World War. A duet performed by Miss Millie Hughes and Miss Muriel Casey appeared on the program for a Red Cross concert for Australia's wounded soldiers at the School of Arts, Richmond, NSW, on 30 July 1915. Miss Ramsay, also performed this song at a concert organised by No 2 Royal Flying Corps Cadet Wing at Priory Hall, Hastings, UK on 28 November 1917. This song was also identified on a list of music that was presented by the YMCA during 1917, although the recipient is not known.

This song was also popular at concerts held in the field and on troopships with many performances recorded by soldiers. Some of the men who served and sang this song have been identified as Sapper Henry John Lee, at a concert by the 1st Field Company Engineers in the field on 25 April 1917, and Gunner William Arthur Parker, at a concert by the 11th Australian Field Artillery Battery aboard HMAT Wiltshire on 27 November 1915. Other performances aboard troopships included HMAT Boorara on 18 August 1919, No 2 AHS Kanowna on 3 August 1918, and also on SS Themistocles to raise money for the Royal Alfred Aged Merchant Seamen's Institution.