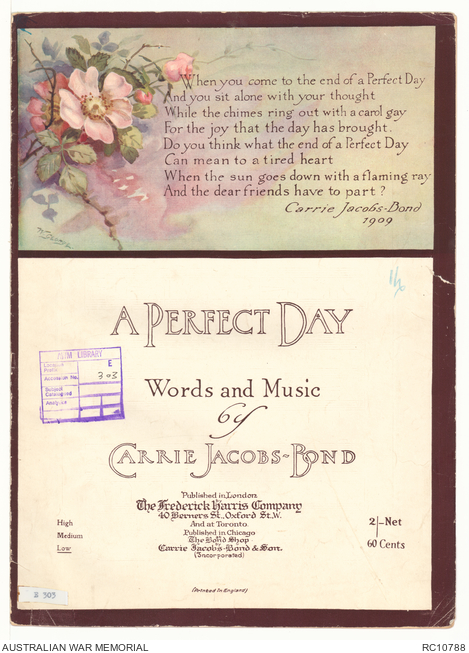 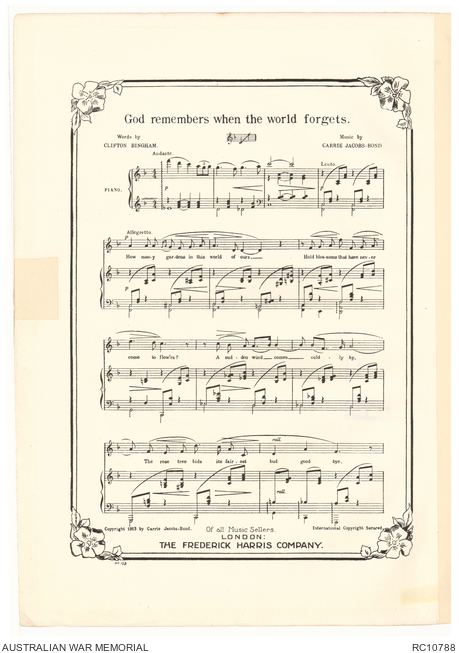 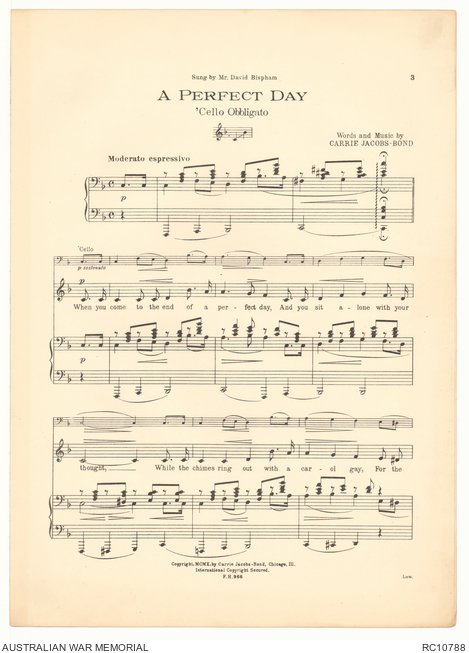 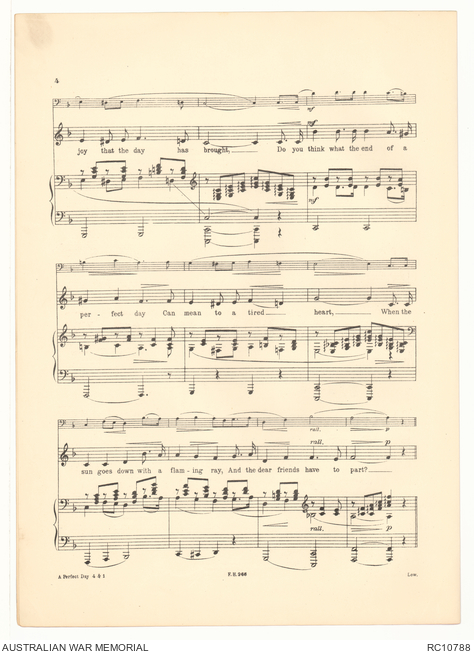 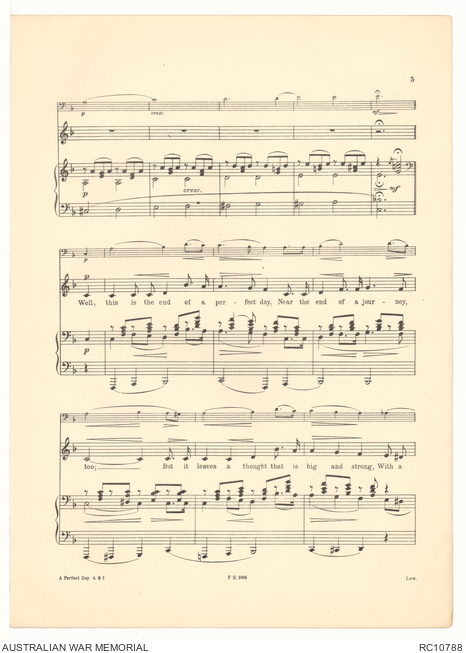 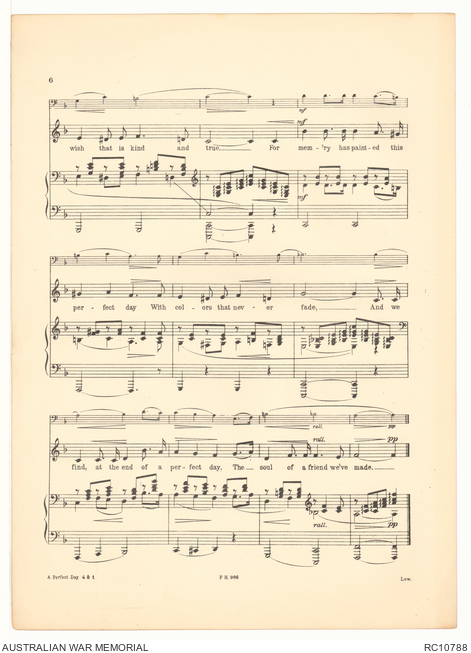 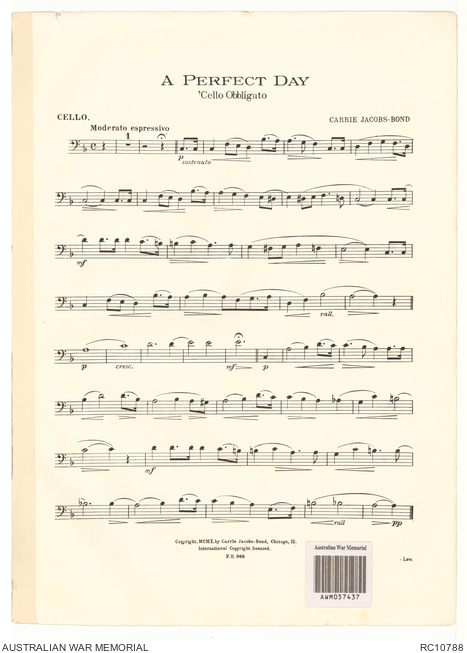 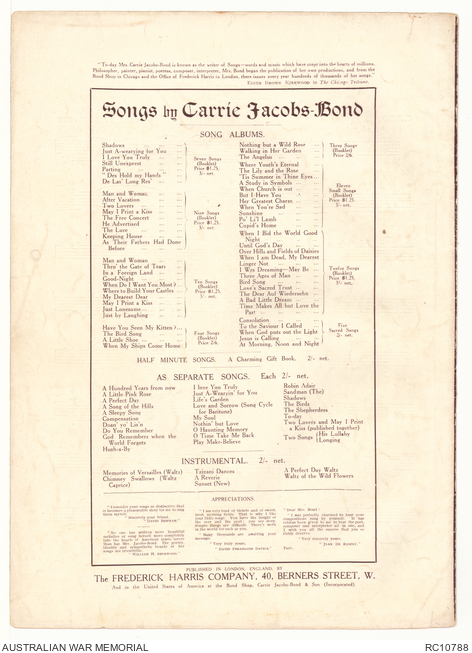 Sheet music for the song titled 'A Perfect Day', with lyrics and music written by Carrie Jacobs-Bond. This parlour song was written in 1909 after Jacobs-Bond watched the sun set over Mount Rubidoux while she was visiting friends in southern California, and was originally published in 1910. The lyrics of this song relate sitting alone with your thoughts as the sun sets, reflecting back on the joys of the day and saying farewell to friends.

The Daily Mercury (Mackay, QLD) detailed the story behind the song by Jacobs-Bond whilst she was visiting London in 1922; 'We had been watching the sun set from a beautiful hill in California…and I went home to get dressed for a dinner. While I was trying to dress, I wrote the words on a card.' Other reports of the story behind this song, such as one published in The Queensland Times (Ipswich) on 2 April 1924, reported that she had spent the day sightseeing, 'and as she was dressing for dinner she paused to stand at the window and watch the daylight fade into night. With a sigh of happiness, she reportedly said "It had been a perfect day." Acting on impulse, she commenced to write, and in the intervals of dressing she set down two stanzas. This article goes on to note she shared the verses with her friends before putting them away and forgetting about them. Three months later driving across the Mojave Desert one evening with friends 'the words came back to her mind, and she sang softly to a melody that seemed to come to her spontaneously. To her amazement she discovered she had written the most popular of modern songs.'

This copy of the sheet music was published about 1913. The cover has been divided into two frames with a maroon border. The top frame features a watercolour painting of pink roses with twilight associated colours extending across the page, with the artwork attributed to W. George. To the right of the roses, the first verse of the song has been typed and attributed to Carrie Jacobs-Bond, 1909. Underneath, in the second frame, are details about the song such as the title, composer, publishing details and pricing information. The song was published in London by The Frederick Harris Company and in Chicago by Carrie Jacobs-Bond & Son at the Bond Shop, and sold for 2 shillings or 60 cents. The second page of the sheet music features an advertising excerpt from the song 'God Remembers When the World Forgets', with words written by Clifton Bingham and music composed by Carrie Jacobs-Bond, first published in 1913. This is followed by a cello part for 'A Perfect Day' on page 3.

The back cover features a listing of works by Jacobs-Bond in the form of songbooks, individual pieces of sheet music and instrumentals. Five 'appreciations' about her music have also been included on the back cover with comments from Edith Brown Kirkwood; David Bispham; William H. Sherwood; David Frangcon Davies; and Jean De Reszke. According to Edith Brown Kirkwood, who published the following in The Chicago Tribune; 'Today Mrs. Carrie Jacobs-Bond is known as the writer of songs – words and music which have crept into the hearts of millions. Philosopher, painter, pianist, poetess, composer, interpreter, Mrs. Bond began the publication of her own productions, and from the Bond Shop in Chicago and the Office of Frederick Harris in London, there issues every year hundreds of thousands of her songs'.

Mr. Charles Cawthorne was the head of a well-known music company in Australia who specialised in the work of Jacobs-Bond. His review of 'A Perfect Day' in The Mail (Adelaide) on 26 October 1912, featured the first 10 bars of the song alongside his view of the piece 'The pretty thought expressed in the verse has been set to an attractive and tuneful melody by the composer of this song, which is uncommonly well presented, and will find many admirers.' The song did indeed find admirers, with The Sunday Times (Perth) edition of 15 December 1946 reporting that the song sold 6 million copies. More recently, a documentary titled Wisconsin Hometown Stories: Janesville claims a total of 25 million copies of the song have been sold since it was first released. In light of these sales, ‘A Perfect Day’ was regarded as 'the most popular song of the twentieth century' by The Advertiser (Adelaide) on 18 June 1938. As a result, the song was reported to have been a 'most consistent money-maker' by The News (Adelaide) on 9 December 1944, which noted that 'Although in any given year it would not sell as many copies as a popular hit, it has had a regular sale for over 25 years.'

Born Carrie Minetta Jacobs at Janesville, Wisconsin, USA, on 11 August 1861, Jacobs-Bond began submitting songs for publication following the sudden death of her husband, Dr. Frank Bond, in 1895. Suffering from rheumatism and facing increasing financial difficulties, the struggling widow reversed her fortunes to become the first female songwriter to make one million dollars from her music. In 1896 she opened Carrie Jacobs-Bond & Son, a publishing house in Chicago, so that she could publish her own music after repeated rejections from publishers. Mr. Frederick Harris, the London publisher of works by Jacob-Bond, described her as 'a versatile woman of middle age. She has a keen business instinct; she is a talented artist, and is able to design the title pages of all her songs as well as to supply the lyrics…'

The life of Jacobs-Bond and her immense success as a songwriter was the subject of many articles in Australian newspapers from the 1920s onwards. These articles often remarked upon the challenges she faced for the best part of a decade following the death of her husband, and how this period shaped her song writing. An article in The Queensland Times (Ipswich), 2 April 1924, suggested that songs like 'A Perfect Day' '…cannot be written by one who has skimmed through life lightly. They reveal evidence of sorrow and hardship and loneliness – all of which must be experienced for one to appreciate fully the healing happiness of a perfect day'.

The song titled 'A Perfect Day' was very popular during the First World War with performances by professional singers through to schoolchildren, and remained popular after the war with many mentions of the song appearing in Australian newspapers until after the end of the Second World War.

Some of the earliest performances of ‘A Perfect Day’ during the First World War were in connection to church events. The Fremantle Herald reported that Mr. A. A. Letch 'greatly pleased the audience by his able rendering’ of ‘A Perfect Day’ during a concert in aid of St. Peter’s Church Fund at East Fremantle Hall on 29 July 1914. Similarly, Mrs. H. J. Macpherson performed the song as part of a musical programme provided by St. Paul’s Church for a bazaar at the Mudgee Town Hall on 25 November 1914.

Professional singers often included ‘A Perfect Day’ in their musical repertoire as did those who were undertaking musical studies. Miss Linda Bradford selected the song as one of the two she performed with the Orange Dandies at His Majesty’s Theatre in Perth on 2 April 1915. Miss Minnie Raynor performed it as an encore during a complimentary concert for Miss Myrtle Power in Melbourne. Miss Lucie Howell rendered an ‘expressive version’ of the song at a concert held at Nicholson’s concert salon in Perth on 11 December 1915. A choral class from the Convent of Mercy at Goulburn presented the song during the Shakespeare Tercentenary celebration on 3 May 1916. The piece was also one of five songs performed by Mr. Harry Porter, a tenor, who was one of the supporting entertainers during a recital by Miss Jenn Thomas on 15 January 1917 at Majestic Hall in Portland, Victoria. Thomas was studying at the Sydney Conservatorium of Music at the time.

Fundraising concerts for the war effort also featured the song in musical programs. The school band from Perth Modern School performed the song at a concert to raise money for the British Red Cross on 27 November 1915. This concert, according to The West Australian, ‘deserves to rank amongst the best school performances heard in Perth’. Miss Minnie Raynor performed the song again at His Majesty’s Theatre, Perth, on 2 September 1916, to raise money for the Soldier’s Institute. Raynor organised this concert herself, which was attended by the Blackboy Camp Band.

‘A Perfect Day’ was also familiar to troops serving with Allied forces. It was in particular demand when Jacobs-Bond toured US Army camps in Europe during the First World War. So much so that Jacobs-Bond herself reported that it was played at a dinner in Los Angeles attended by an Austrian composer, who was asked afterwards why he was standing, reportedly responded 'Am I the only one who stands when your national anthem is played?' The song was performed by the band of H.M. Hampshire Regiment as a cornet solo on 24 September 1916. Private J. L. Allen was also noted for performing this song at the Ravasco Hospital in Italy on 19 February 1918, organised by the Patriotic League of Britons Overseas. Sergeant Adcock and Sergeant Day, British service personnel, performed the song during a Christmas concert in 1916 at the Field Bakeries Sergeants’ Mess in North Rouen, France.

The song was popular amongst Australian soldiers, garnering eight mentions in concert programs. Corporal Sidney George William Turner of the 1st Light Trench Mortar Battery appears to have given a solo performance of the song during a concert aboard TSS Ascanius on 27 November 1916. Five performances of the song also occurred on troopships, variously performed by Staff Sergeant L. Coe aboard TSS Euripides on 27 November 1915; Private George Henry Webster on HMAHS Kanowna on 3 February 1917; Sergeant Major Broadbent on HMAT Orsova on 25 March 1915; and Corporal Jack Vincent and Lieutenant John William Axtens aboard HMAT Suevic on 7 August 1917. A song with the alternative name of 'Ideas of a Perfect Day' was also performed by the Anzac Coves at the Theatre Francais, Rouen, France, between 3-4 August 1918 and again between 15-16 August 1918. In 1918, Edward White Moncreiff of the 45th Infantry Battalion attended a concert by 'The Bluebells', at Aldgate, England, which featured ‘A Perfect Day’ along with other songs, dances and choruses. This song was also appears to have been used as the inspiration for 'The Kit Inspection Hymn', written by Ernest Nicholls, with the lyrics suggesting it is a parody.

‘A Perfect Day’ remained popular after the First World War. During the 1920s, it featured in a performance by the Stewart and Lorraine duo at the Shaftesbury Theatre, as reported by The Call on 23 July 1920. The story relays that the original title of 'A Perfect Day' was 'The End of a Perfect Day', and that it was so well known that one of the singers announced that he was going to sing a 'well-known song' – 'The Close of a Perfect Day'. The article continues to say that it was so well-known that he didn’t know the title and suggested that Jacobs-Bond might appreciate the new title.

During the late 1920s into the 1930s, the song maintained consistent sales in its recorded form. Between 1927 and 1929 it regularly featured on radio programs. Around 1930, it also appears to have been recorded by Ethel Hook, an English contralto who organised many concerts during the First World War, and performed the song 'very artistically' according to a report in The Sydney Morning Herald. The article remarked that the song was sung in every second household only ten years prior but now 'the younger generation is so wrapped up in jazz rhythms that many melodious songs like ‘A Perfect Day’ are absolutely unknown.'