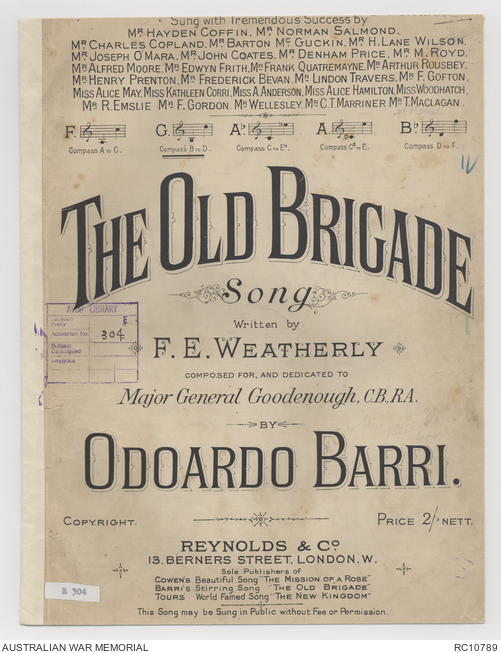 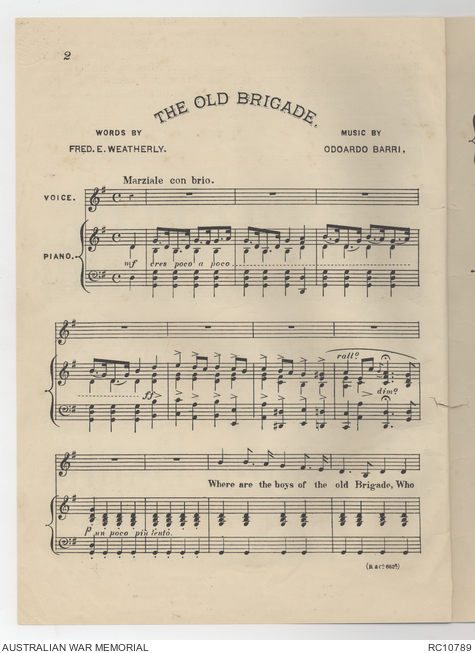 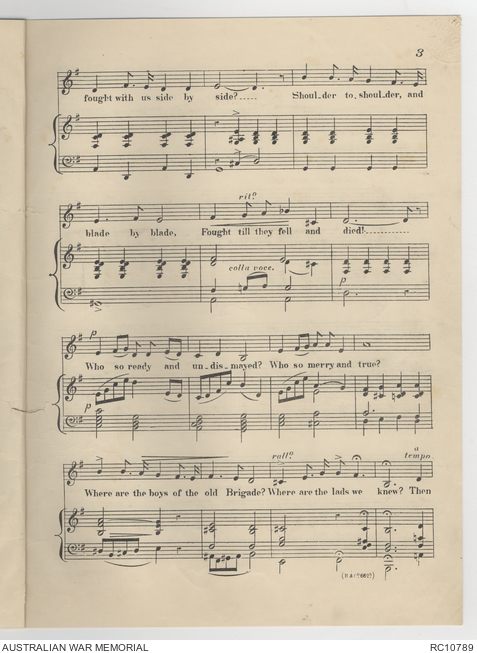 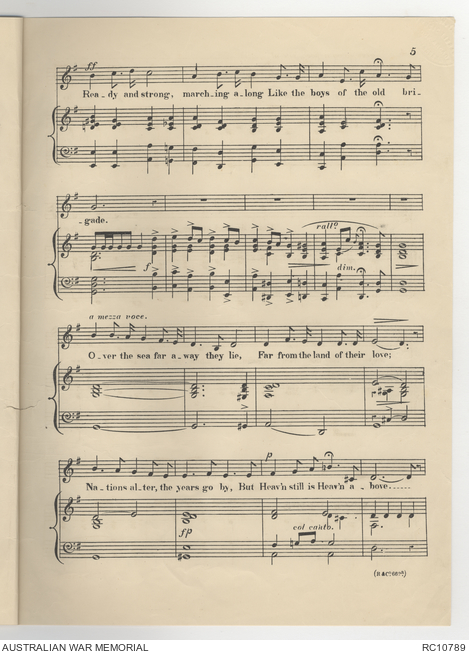 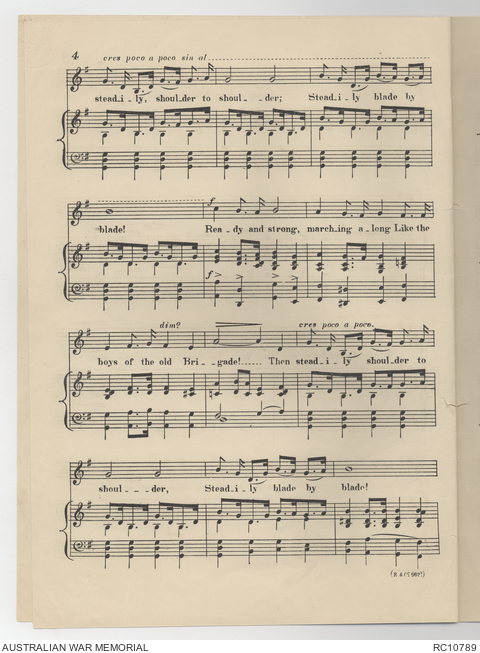 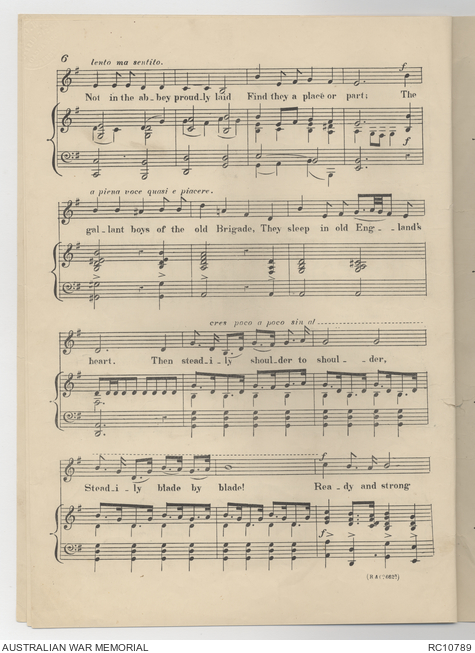 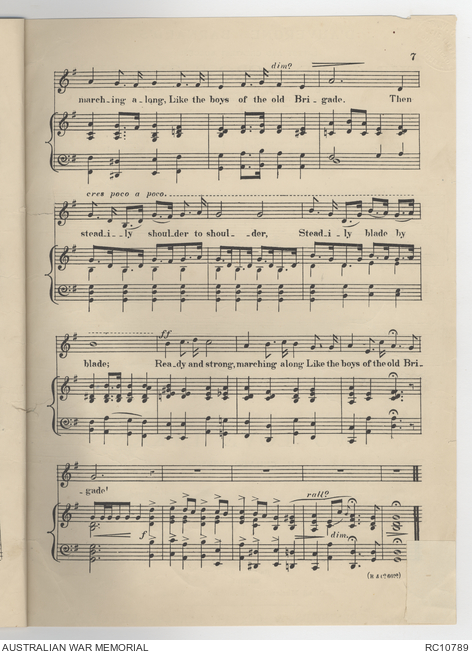 Sheet music for the song titled 'The old brigade', with music composed by Odoardo Barri, pseudonym of Edward Slater, and lyrics written by Frederic Edward Weatherly. The piece was composed for and dedicated to Major General William Howley Goodenough, C.B., R.A., who commanded the Royal Artillery during the Anglo-Egyptian War of 1882. The underlying piece of music has been composed as a slow march and is written in G Major. The song appears to have been first published between 1880 and 1881.

This copy of the song features the names of all the performers who contributed to the success of the song on stage with a total of 28 names listed at the top of the front cover. It was published by Reynolds & Co, London, who were the sole publishers of the work. The sheet music sold for 2/- and although the word copyright appears on teh cover, there is also a note that the song 'may be sung in public without fee or permission'.

On the back cover of this copy is an advertising preview for the song 'The land across the sea' written by British composer Graham Clifton Bingham in 1902 and the lyrics for another song titled 'Two love lyrics' which was written by H Chilver Wilson and Gertrude Louise Luckie. This piece of music was also published in 1902.

Edward Slater was born in Dublin, Ireland who worked in Italy and Spain before opening a music school in London. He claimed to have been born at Como, Italy and that he had also fought at the battle of Solferino during the Second Italian War of Independence in 1859.

The first performance of this song in Australia during the First World War occurred at the Tivoli Theatre, Perth, on 8 August 1914. The song was performed by The Six Camerons which included a new, patriotic verse, that had been compiled by Edwin Greenslade Murphy under the pseudonym of Dryblower. Another early performance was given at Boyup Creek, Western Australia, by Mr N Buchanan at a concert organised to raise money for the Church Building Fund on 5 August 1914. Another church fundraising event also featuring a concert with a performance of this song occurred at St John’s Mission, Tasmania, on 26 August 1914. The song was performed by Mr Wilson with the concert intended to raise money for the piano fund. The Fremantle Girls Society also featured this song in a concert at the Victoria Hall, Fremantle, on 22 August 1916.

This song was very popular at concerts in Australia that were described as patriotic events or organised for fundraising purposes in support of the war effort. The first mention of this song at a patriotic concert during the First World War occurred at Charters Towers on 18 August 1914 where Dick Hall was encored for his performance. Another patriotic concert where this song was performed as an encore, took place at Mildura on 1 September 1914. The concert was organised by the Mildura Musical Society who provided an orchestra, choir and a musical program where ‘almost entirely composed of patriotic songs and choruses’. Half of the proceeds were donated to the Red Cross. The Belgian Relief Fund was also the beneficiary of a concert at Toolern Vale, Victoria on 26 March 1915, where this song was performed by Mr Groube. Similarly, the town of Kjergaard, Victoria, organised a concert to help the Belgians on 30 April 1915 and this song was performed as an encore by Mr Archie Daniel. Another fundraising concert where this song featured as part of the musical program was presented by the Dubbo Caledonian Society to raise money for those who became orphans as a result of the war on 13 April 1915. The song was performed, to much applause, by Mr A T Goodwin.

This song was also performed by Australian soldiers while on active service during the First World War. This song was popular on troopships heading overseas with two concerts noted in 1915 aboard troopships featuring this song. The first of these was given by 1761 Sergeant Frederick Clifford Kemp aboard HMAT Shropshire on 3 April 1915 and another by Captain McDonnell aboard RMS Ionic on 24 December 1915. In Rabaul, New Britain, this song featured in the concert given by the 3rd Battalion, Naval and Military Expeditionary Force to mark the birthday of King George V on 3 June 1915. At this concert, the song was performed by Private Johnson. Other troopship performances of this song were given by 4751 Corporal William Henry Cathro aboard HMAT Anchises on 10 February 1917. It was also performed at a concert held at Passchendale, Belgium on 25 June 1920.

The Blackboy Hill concert party presented a concert at Katanning Town Hall on 19 April 1917 when the performance of this song by Gunner Lewis was described as ‘one of the star items of the evening’. The Cheer-Up Hut Concert Party, which included returned soldiers and those who were rejected from enlistment, performed this song at a concert at Broken Hill on 23 September 1918. The song was performed as a duet by Trooper Lionel Symons and Mr Clement Crisps. This concert party raised 2300 pounds over a period of ten months for the Cheer-Up Hut movement.

This song was also featured in concerts given in honour of those who served in the First World War when they returned to Australia. One of the first of these concerts appears to have been given in honour of Private A Brereton at the Malmsbury Town Hall on 19 February 1918. Driver Rodd and Private W Kelley were also farewelled at this event where ‘The Old Brigade’ was performed by children from the local Catholic school. Another welcome home concert was held at Dubbo in honour of Corporal Neil Hives on 25 March 1919 where music and song predominated over speeches. During the evening, ‘The Old Brigade’ performance given by Mr W Gordon received an encore with his follow up piece being the Harry Lauder song ‘Deoch and Doris’.

This song was also popular during concerts organised or attended by Australian service personnel while on active service abroad during the First World War. The first of these performances was given by Sergeant Frederick Clifford Kemp aboard HMAT Shropshire on 3 April 1915. Another performance was given by Private Johnson during a concert to celebrate the birthday of King George V on 3 June 1915 at Rabaul, New Britain by the 3rd Battalion, Naval and Military Expeditionary Force. Captain McDonnell sang this song during a concert aboard RMS Ionic on 24 December 1915. Corporal William Henry Cathro performed this song during a concert held aboard HMAT Anchises on 10 February 1917. Performances of this song were also given after the official end of the First World War by Wardle during a concert at Passchendale on 25 June 1920 and Private Young, Private Burgess, Corporal Franklin and Sergeant Thomas Benjamin Pattenden during three performances by the Rising Sun Concert Party aboard HMT Somali during early 1919. This song was also performed at a concert given by the Fremantle Girls Society on 22 August 1916.