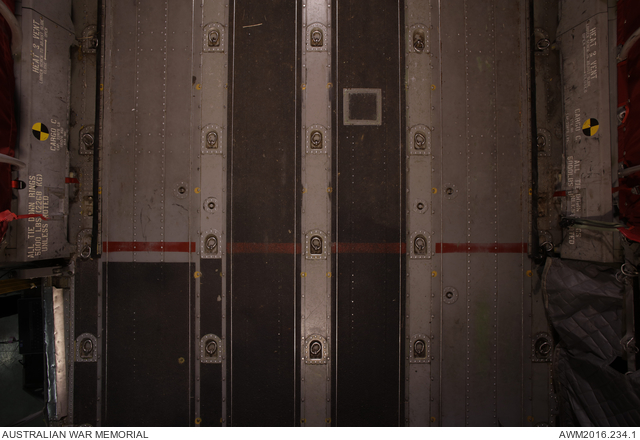 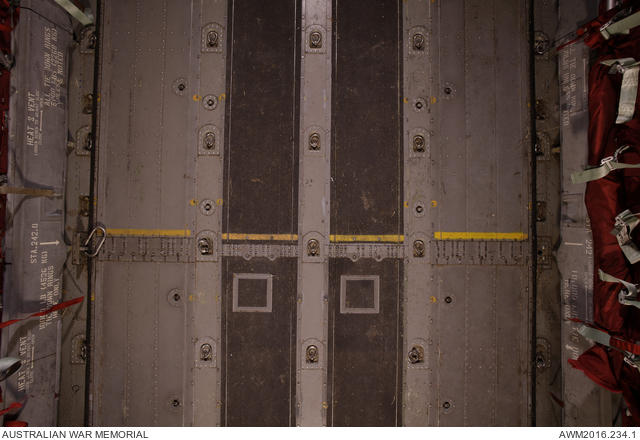 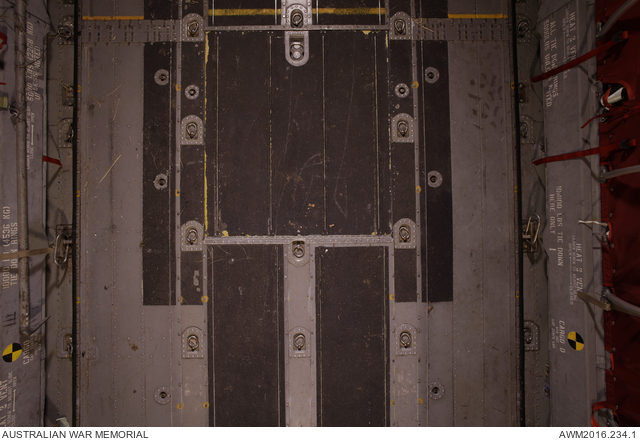 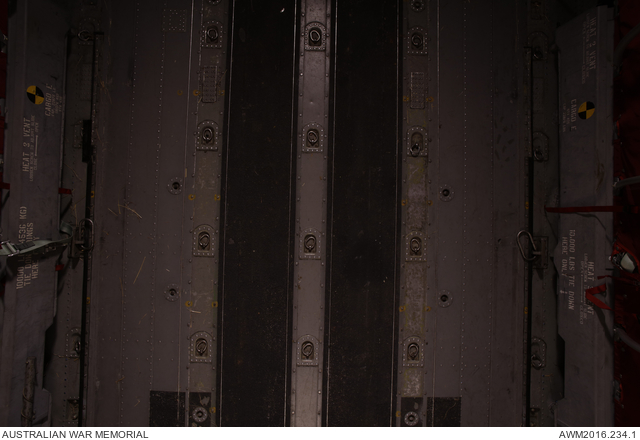 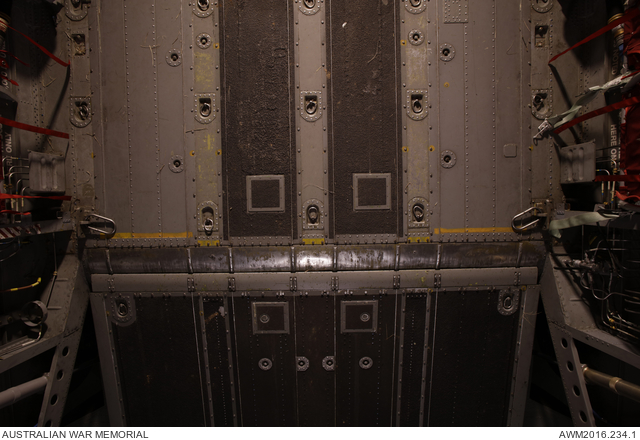 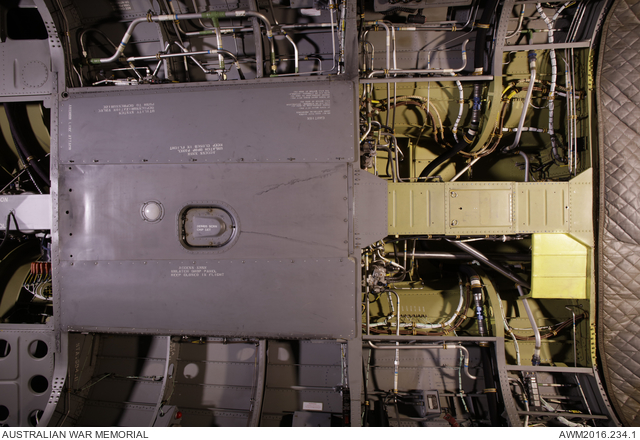 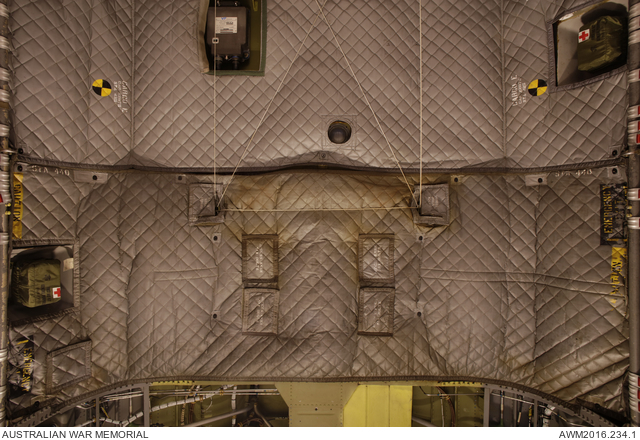 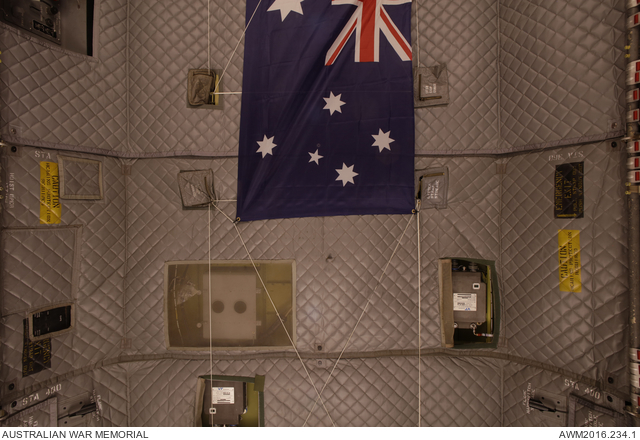 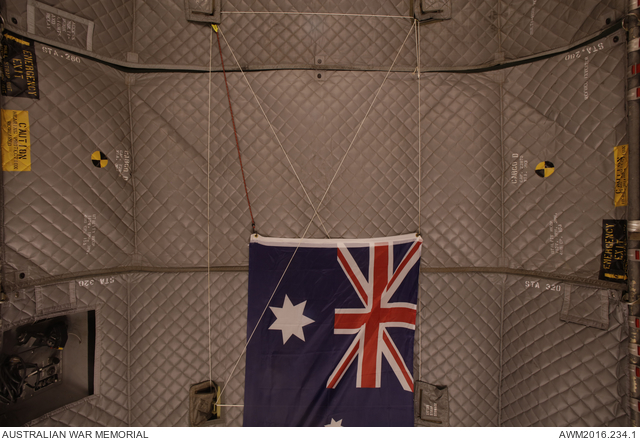 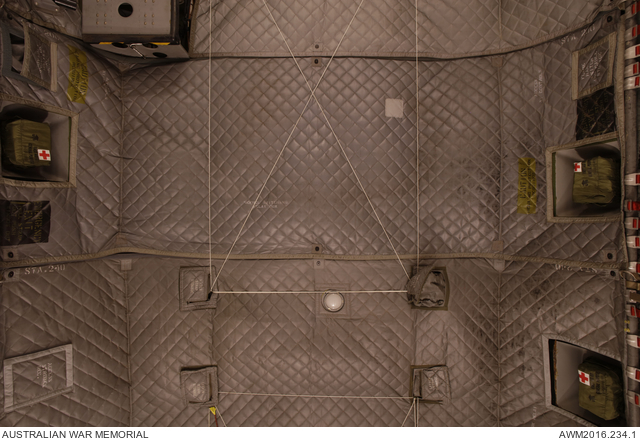 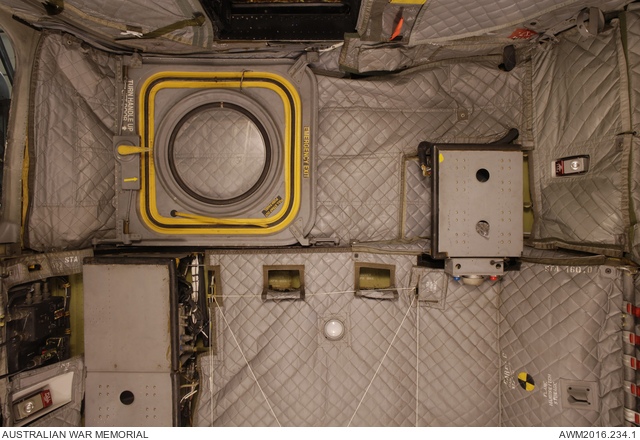 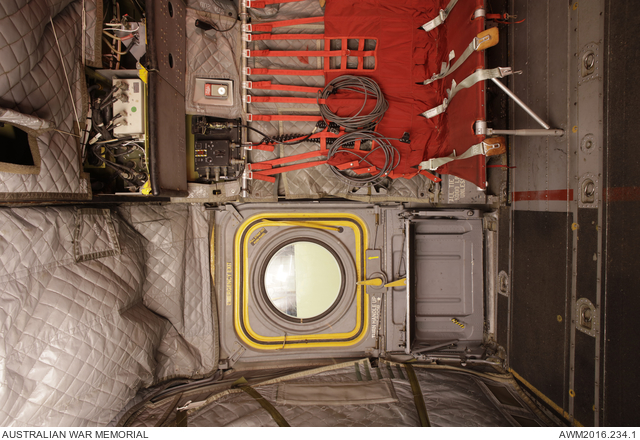 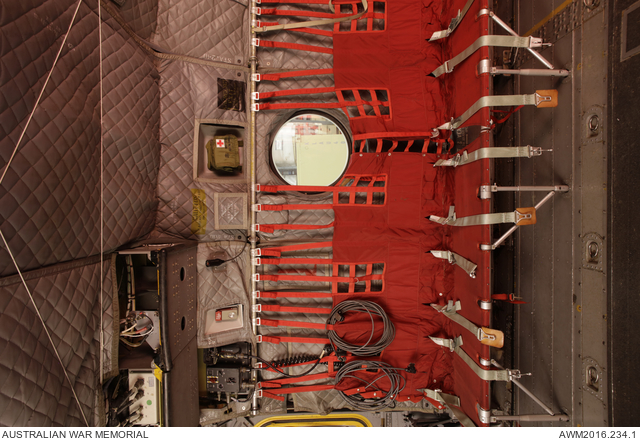 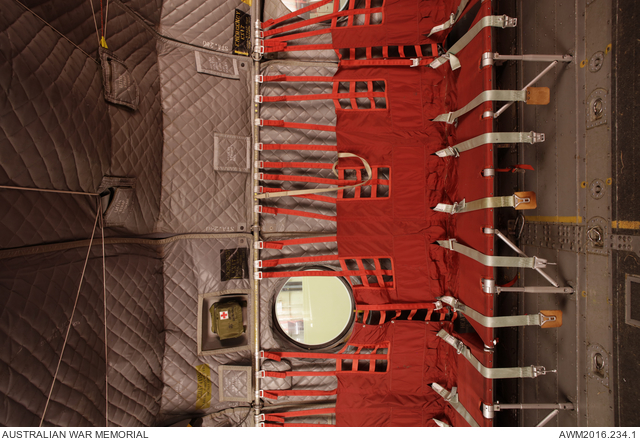 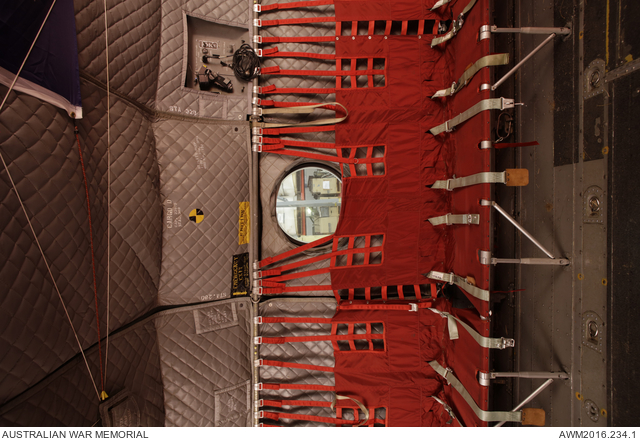 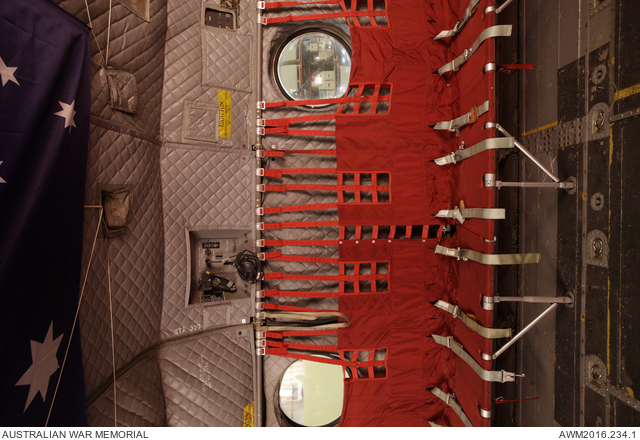 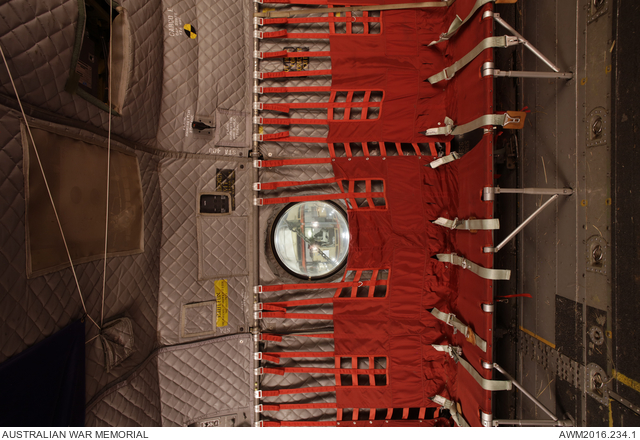 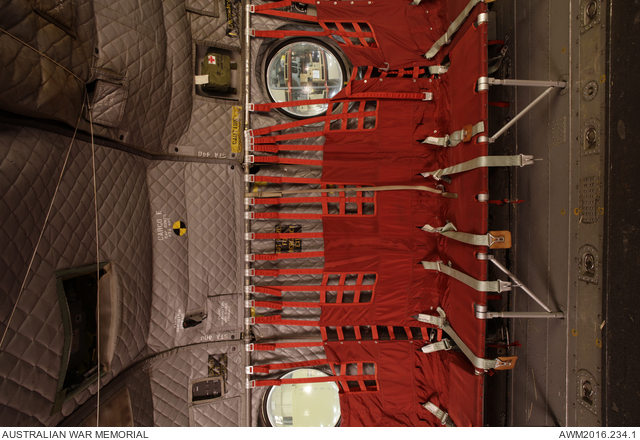 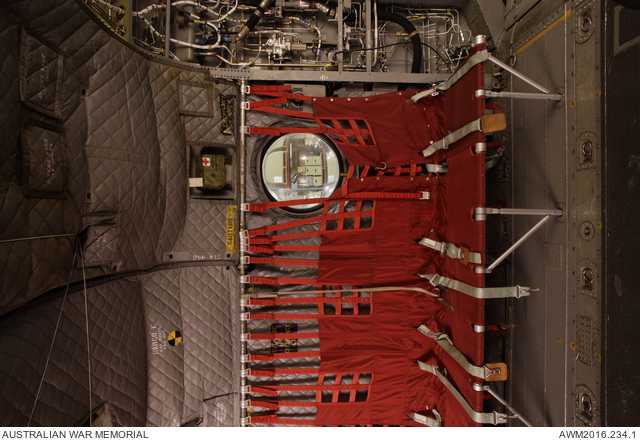 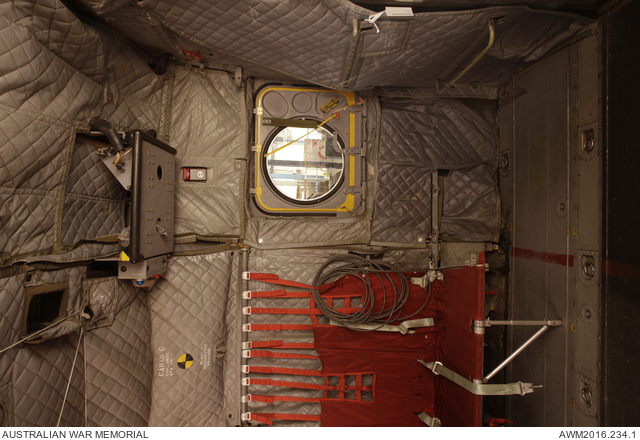 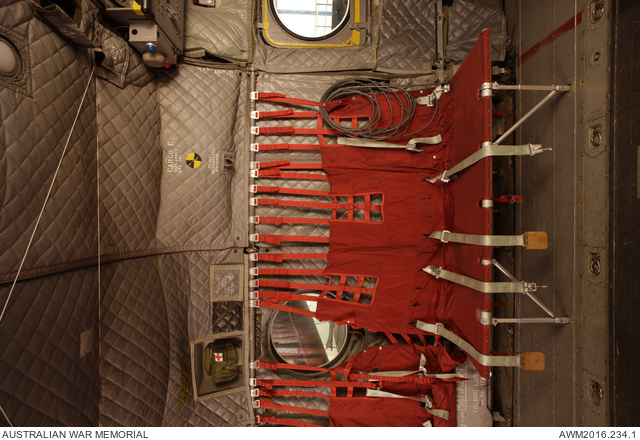 CH-47D Chinook A15-202 ‘Centaur’. A medium lift, twin rotor helicopter capable of battlefield support missions. The aircraft is powered by two Lycoming T55 L 714A turbine engines. The aircraft has a rear opening cargo ramp. The aircraft is fitted with a crash resistant fuel system, and armor plate protecting the transmission and oil coolers. Antennas for the radar warning system are mounted on the nose and training edge of the rear rotor pylon. A fitting for an M-130 Flare dispenser is also fitted to the port side of the rear fuselage. The rotor blades are fibreglass, with a 32 inch chord. One of the rotor blades shows evidence of repairs undertaken after hailstones punched through the blade at Kandahar airfield in April 2013. The aircraft fuselage was pierced by small arms fire in 2009, which damaged the fuel pressure line, with repairs still evident on the starboard side of the fuselage.

The aircraft is painted in a drab olive scheme, and carries the name 'Centaur' painted above the crew entry door and opposing window, and a printed 1940s styled commercially produced nose-art sticker ('Good as Gold') on its starboard chin.

This aircraft served with C Squadron of the 5th Aviation Regiment, Australian Army from 2000 until its retirement on 19 April 2016, when it was flown to Canberra for delivery to the Australian War Memorial. A15 202 saw extensive service in Afghanistan as part of 'Operation Slipper', where it took part in combat operations. The aircraft was damaged by enemy fire during a troop insertion in Afghanistan in 2009 and its pilot, Captain Michael Whitney, was awarded the Distinguished Service Medal for distinguished leadership in action.

The CH 47 Chinook was designed in the late 1950s, with the first production models being delivered to the US Goverment in February 1962. By 1965 the aircraft type had seen extensive combat service in Vietnam, and they continued to provide support throughout the War. The RAAF first acquired CH 47C models in 1972. A number of these were upgraded during the 1980s to 'D' models. This particular aircraft - A15-202 - was however, manufactured and delivered in 2000 as a 'D' model.

The CH 47 D was the first medium lift helicopter capable of lifting an M198 155mm howitzer, and the first Chinook model capable of in flight re-fueling. The aircraft can climb at 1000m per minute and hover at 5000m and can accomodate 44 combat troops, and sling external loads under the fuselage using a three hook system for a maximum payload of 12 tonnes. The CH47D is being replaced in Australian service by the CH47F.