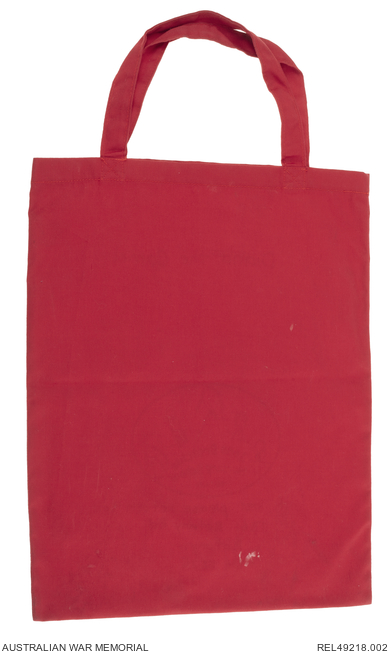 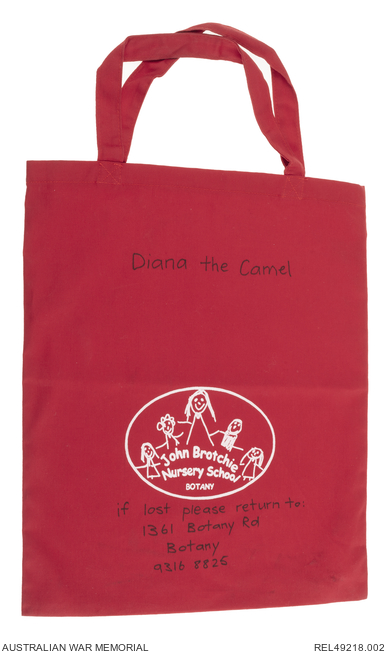 Red cotton carry tote bag. The front of the bag is printed with the John Brotchie Nursery School logo in white. Above the logo is 'Diana the Camel' handwritten in black ink. Beneath the logo is 'if lost please return to : 1361 Botany Rd Botany 9316 8825'.

Lieutenant Ross Shackleton was serving in the Royal Australian Navy when he was deployed to Afghanistan. During his deployment, Shackleton purchased and posted a toy camel to the John Brotchie Nursery School, Botany, New South Wales. His son Alexander attended the preschool, and his wife, Tiffany, was a teacher there at the time. The camel (named ‘Diana’) became the school pet and each child had the opportunity to take Diana home for the weekend in this bag and share their experiences with her in a journal which the families collated. When Lieutenant Shackleton returned to Australia he visited the preschool and Diana the camel.

Mrs Shackleton reflected on the experience as ‘a beautiful way to keep myself, our son and all the children connected to Ross while he was away. It also introduced cultural understanding to the preschool as the children became interested in Afghanistan and researched about the country, the children and what their schools were like’. The journal is also held in the Memorial’s collection.