[Sheet music] I Hear You Calling Me 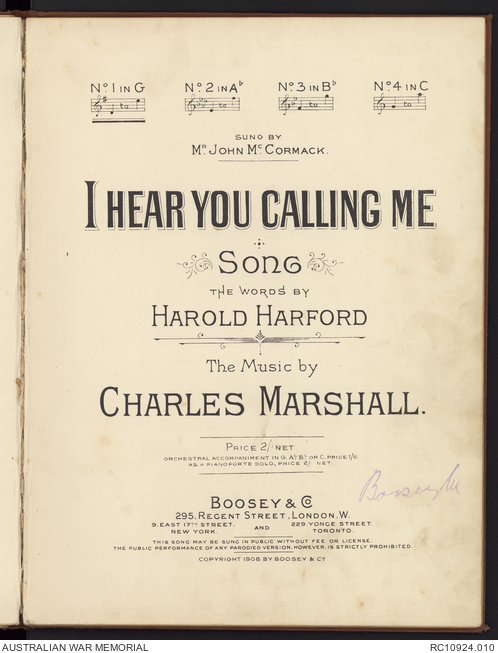 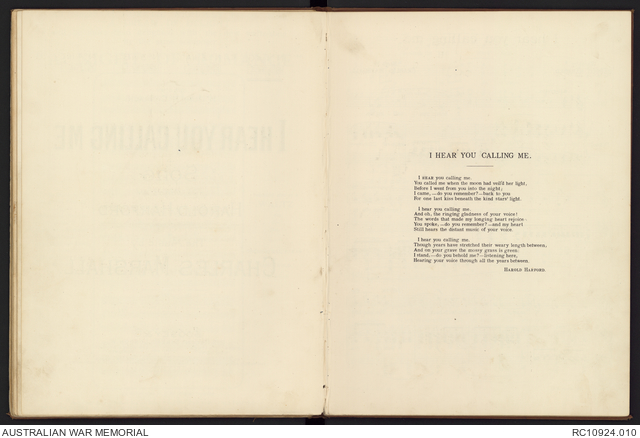 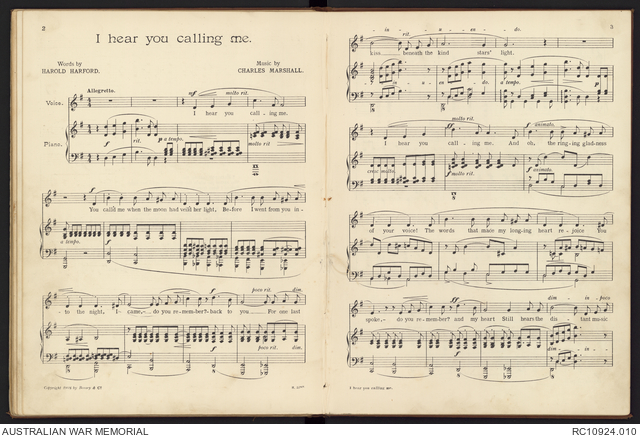 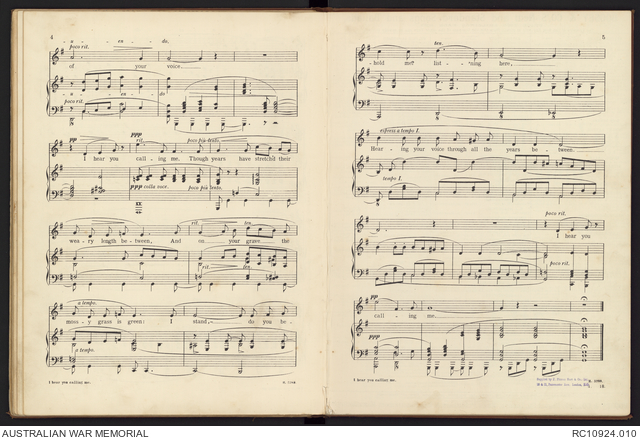 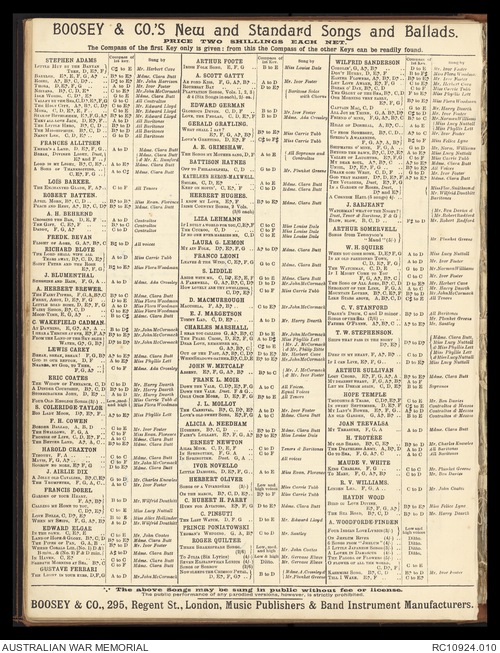 Sheet music for the song titled 'I hear you calling me', with music composed by Charles Marshall and lyrics written by Harold Lake. The song was published in 1908 with several editions appearing in different keys. Lyrics from this song also appeared on a series of postcards published in 1915. This copy of the song was included in the compilation album titled 'Australian Y.M.C.A songs, Vol. IV', which was published about 1918. The sheet music for the song itself, was published by Boosey & Co and sold for 2/-. The cover also features the comment that performances of parodies of the song in public were prohibited. The back cover features a list of other titles of music available from Boosey & Co.

In 'The Edwardian Song Book', Turner and Miall mention Marshall visited the tenor singer, John McCormack, so that he could hear the song. McCormack recorded the song a total of six times and is credited to have been responsible for making the song famous. This copy of the sheet music for the song also attests 'Sung by Mr John McCormack' at the top of the front cover. The lyrics of the song emphasise remembering the sound of someone's voice, no matter how much time has passed, while visiting the grave of a loved one.

Harold Lake, a journalist who used the pen name of Harold Harford, had been encouraged by a friend in the Westminster Choir to write lyrics for some time before these lyrics were put to paper. The words reportedly came to Lake after waking up one morning and were composed within 20 minutes. Lake relays the story behind the lyrics, as: ‘A 16 year old pupil teacher at an elementary school in Canterbury [England] met a girl nearly a year his junior. Then followed three years of utter devotion as only the very young can know, then a fortnight of galloping consumption, and a lad of 19 standing on a November day grave.’

The song became a very popular gramophone recording with the Brisbane Courier, upon Lake's death in 1933, reporting that he made a 'small fortune' from the royalties for recordings of the song but ony a few pounds for the sale of the song.

The first reports of this song began appearing in Australian newspapers during 1909. The first performance was noted as being given by Mr Frederick Ranalow on 9 March 1909 at a concert performing pieces Dame Nellie Melba made famous. This became the first Melba concert, an event that came to be held annually. One of the earliest First World War performances of the song was by Mr Gregor Wood at the Preston Shire Hall on Tuesday 11 August 1914. This event was reported in the Preston Leader with comments that the effects of the war were beginning to show through the reduced numbers of people who attended the concert. The first patriotic concert reported to feature this song was the Grand Patriotic Concert in aid of the Mayoress’ Patriotic Fund at the Warrnambool Town Hall on 25 August 1914. According to the Warrnambool Standard, this concert was 'about the most successful' event to be held in Warrnambool for some time. Another patriotic concert, reported in a similar fashion, was held at the Craft Hall, Dunedoo on Wednesday 23 September 1914. 'I hear you calling me' was one of four songs performed by Mr Biddulph at this event which was reported in The Mudgee Guardian and North-Western Representative as 'never before had such a crowd assembled in a hall in Dunedoo'.

The song titled 'I hear you calling me' was enormously popular at concerts organised to support First World War fundraising efforts. Mr Casey performed this song at an event to raise money for Belgian nuns that was held at the Beechworth Junction Hall on Wednesday 24 March 1915. This was the same evening that Miss Poole performed the song at a fundraising concert for the Belgians at Merrigum Mechanics Institute. Miss Elsie Code sang this song at several fundraising events for the Belgians throughout regional Victoria including one performance with Barkell's Lyric Concert Company from Bendigo at Frantz's Hall, Cohuna on Saturday 3 April 1915 where the performers missed their train and travelled via a variety of other means to reach Cohuna. At Hay, on 30 October 1915, a concert was held in honour of twenty-six local men who had enlisted. It was at this concert that Marsh Little, composer of the song titled 'Boys of the Dardanelles', performed this song. Mr Walter Kirby also performed the song during a Red Cross benefit concert at Melbourne Town Hall. This concert was held on 11 August 1915 and also featured the Australian soprano Amy Castles. Another fundraising event was held at Eaglehawk Town Hall on Monday 1 March 1915, where the song was performed by Mr Stanley Elliott. This concert was organised to raise money in order to be able to farewell locals who joined the AIF.
Performances of the song 'I hear you calling me' were also given at school concerts, welcome home events, dances, birthday parties and other social events during the years of the First World War. Mr Ward performed the song during the musical programme delivered after a lecture titled 'Women and War' that was given by Mrs Jamieson Williams to the Catholic Women's Association, Darlinghurst on Friday 9 October 1914. The song also featured at an event for Mr and Mrs E J Hourigan and family, following their return from Great Britain, on Saturday 7 November 1914. The Belgian Band also performed this song at their sixth concert in Australia at the Exhibition Hall, Adelaide on Friday 25 June 1915. This band consisted of twenty-eight performers who were all refugees from Antwerp, Brussels and Ostend. Mr J and N Tait secured the group for a tour of Australia and New Zealand that started during June 1915. This song was also very popular at concerts given by Miss Amy Castles, who was on her farewell tour of Australia before leaving for America during November 1915. These concerts featured a number of supporting artists. One of these was her brother George, who always performed this song at these concerts. George Castles later joined the AIF and was a member of the Fourth Division Concert Party, 'The Smart Set'.

This was a popular song performed by Australian service personnel on troopships and in concert parties during the First World War. The first of these performances was by Private James Muir during a concert on Saturday 21 November 1914 aboard HMAT Geelong. Sergeant Davidson was another, with an appearance in a concert on Tuesday 10 August 1915 aboard HMAT Demosthenes. Private Andrew Duncan Bett, who served with the 8th Battalion, performed this song with the First Division Concert Party, The Sentimental Blokes, at a concert in Belgium during 1918. A copy of this song was also copied out by hand on 8 November 1917 by Corporal John Aitken Ballantyne as a gift for Sergeant Frederick Reginald Hedges at AIF Headquarters, Tidworth.

Performances of this song also featured at events held to entertain, farewell and welcome home men and women who served during the First World War. During her farewell tour of regional Victoria, Amy Castles performed at the YMCA tent at the Bendigo camp for the soldiers. Thirteen men were farewelled at Mittagong by the Mittagong War Services Committee on Friday 25 February 1916 with a performance of this song given by a resident of the neighbouring town of Alpine. The song was performed several times at concerts by Private John Magness Fisher before he enlisted with the Australian Medical Corps. His final performance was given at the 'All Khaki Concert' in Brisbane, Queensland on Saturday 22 September 1916. Another of his performances of this song was attended by a large number of returned soldiers and was held occurred at the Kangaroo Point Military Hospital, where he was on staff. Mrs W Dickson performed this song at a reception to welcome home Staff Nurse Mary Agnes (Daisy) Day at Lockhart, New South Wales on Thursday 7 February 1918. Private Ernie White and Private C Wilkins were similarly welcomed home with an event featuring this song at Biggenden, Queensland on Tuesday 11 June 1918.
Peace celebrations and commemorative events also featured this song during the years of the First World War and into 1919. On Wednesday 24 May 1916, the composer Marsh Little again performed this song but this time it was at an event to unveil Katoomba's Roll of Honour, containing 150 names. A peace concert was organised by Miss Phyllis Hazell on Tuesday 11 November 1919, the first anniversary of the end of the First World War, to raise money for the Liverpool District Ambulance Fund and was performed by Mr Eric Horwood.