[Sheet music] Pack Up Your Troubles in Your Old Kit-Bag 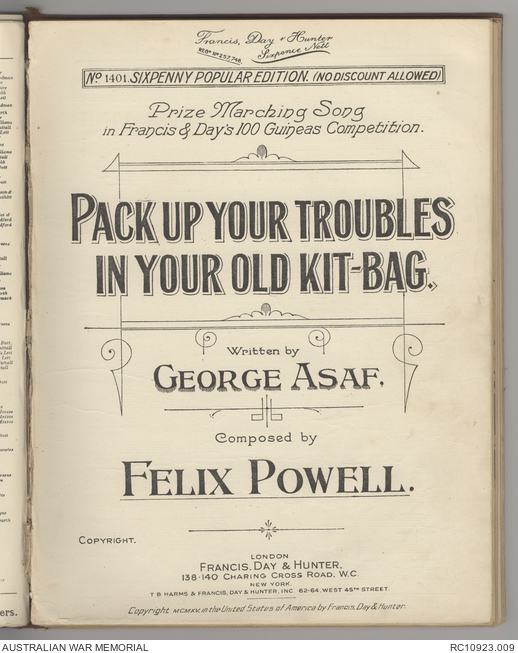 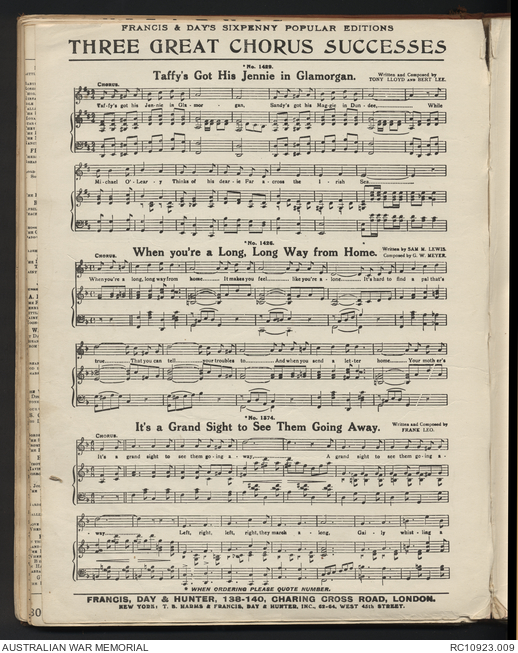 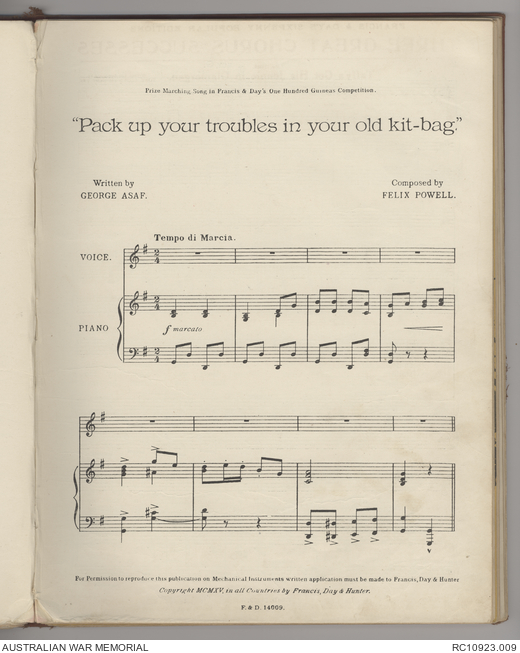 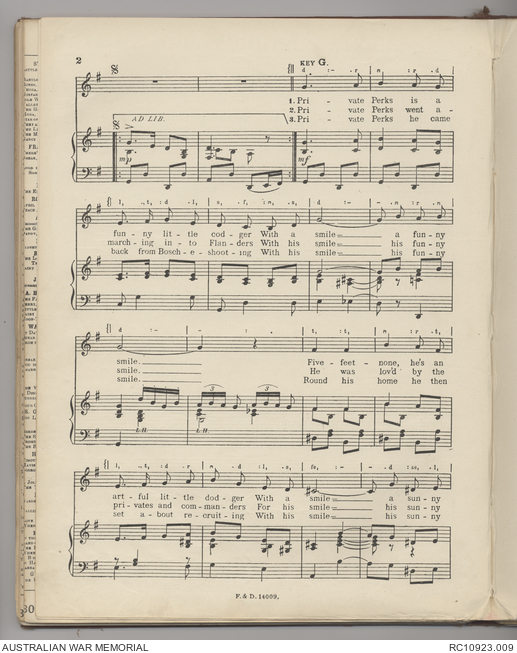 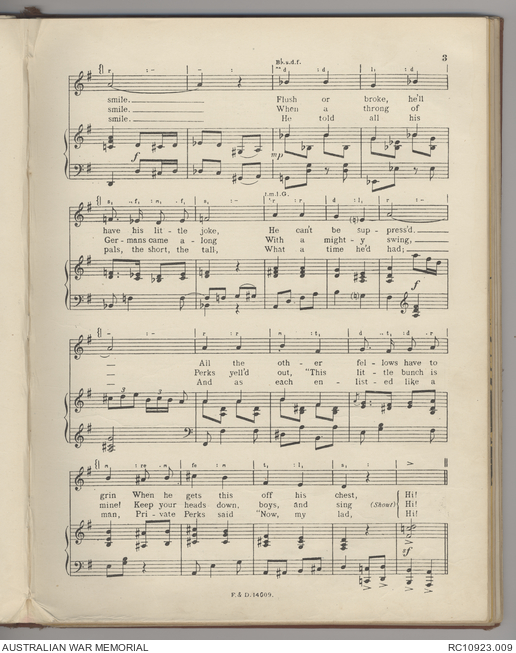 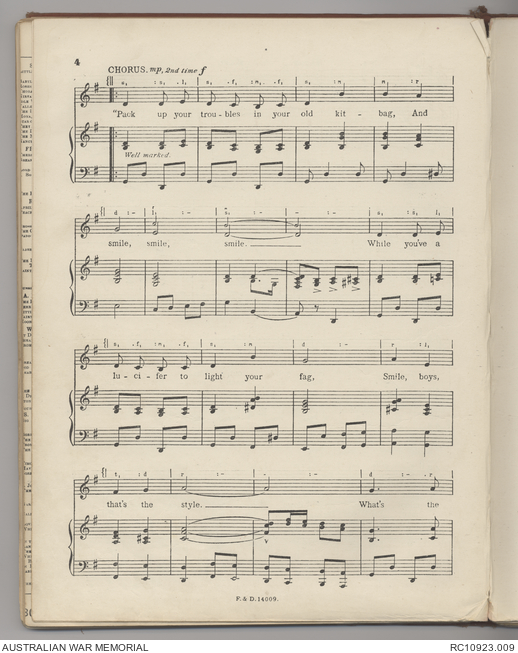 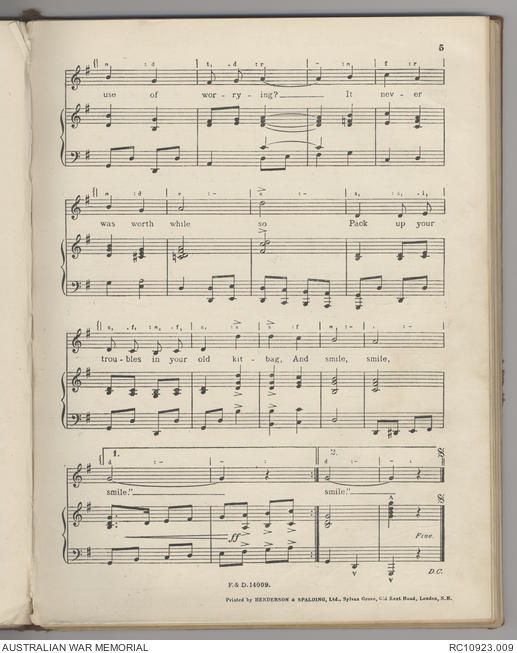 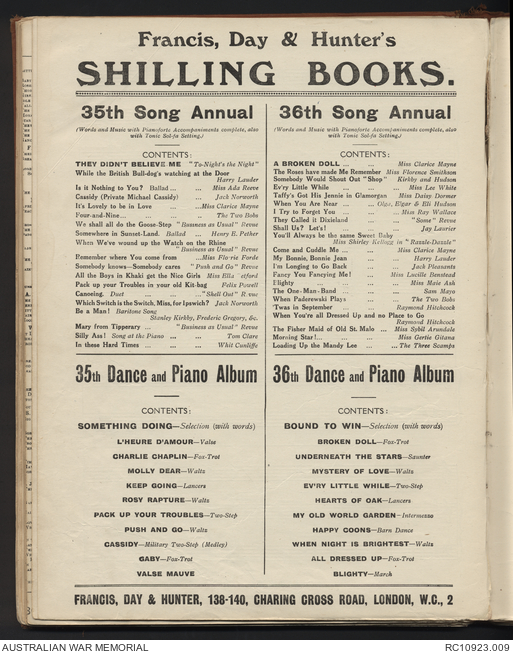 Sheet music for the song titled, 'Pack up your troubles in your old kit bag', with lyrics written by Geoge Asaf (pseudoym of George Henry Powell) and msuic composed by his older brother, Felix Lloyd Powell. The lyrics advise listeners to smile instead of worrying and question the wisdom of doing the latter. An alternative reference to the title of the song is 'Pack up your troubles in your old kit-bag and smile, smile, smile'. This is a First World War marching song and was submitted to a competition organised by Francis Day and Hunter, music publishers, to find the best marching tune. it was awarded the first prize sum of 100 guineas.

This is the 1401st copy of the song and was referred to as the sixpenny edition. It has been published in the key of G Major and is part of a compilation titled, 'Australian YMCA Songs Volume II'. Inside the front cover of this copy, are excerpts from three songs, added by the publisher for advertising purposes: 'Taffy's got his Jennie in Glamorgan' written and composed by Tony Lloyd and Bert Lee; 'When you're a long, long way from home', written by Sam M Lewis and composed by G W Meyer; and 'It's a grand sight to see them going away', written and composed by Frank Leo. The back page features the titles and contents of four of Francis, Day & Hunter's shilling books: '35th song annual'; '36th song annual'; '35th dance and piano album'; and '36th dance and piano album'.

According to choirmaster Gareth Malone, the song could attribute its success to 'simplicity. It's written in G major, which can be played on a wide range of instruments relatively easily.' Malone also mentioned that there were words in the first two lines that soldiers immediately connected with. When the news was recieved that the song had won first prize, it is reported that Felix mentioned that they added the song into their show at Southampton and 'were as amused as we were delighted to hear thousands of troops singing it en route for the docks'. Over time, the two brothers became aware of how the song was being used during the First World War.

George Henry Powell and Felix Lloyd Powell were brothers from the Welsh town of St Asaph. They were both educated at St Asaph Cathedral where George was a chorister and Felix was an organist at the cathedral. They were music hall stars before 'Pack up your troubles in your old kit-bag', became a hit during the First World War. George was a pacifist and Felix served as a staff sergeant during the First World War. After the war, the brothers operated a theatre and newspaper in Sussex. Felix served with the Home Guard during the Second World War. There are reports that George went on to become a baker and confectioner. A historic plaque marks the house where they were born in St Asaph, Wales.

'Pack up your troubles in your old kit bag' was a song that quickly became popular in music halls in England. It was introduced to Australian audiences by Mr Jack Cannot at the Tivoli Theatre, Melbourne during March 1916.

One of the stories associated with this song, that received lots of coverage in the Australian newspapers, was the sinking of the Royal Navy's cruiser, HM Laurentic, by a mine off the coast of Ireland in January 1917. The mayor of the town where the survivors arrived reported that one of the survivors, a 17 year old sailor, found a piano in the recreation room and played a rendition of this song. Despite their recent experience, his comrades joined in.

The song was also popular in concerts organised by soldiers on the Western Front. One instance of this was during the farewell concert for Major Walter Oswald Watt by the Kookaburras Concert Party, No 2 Squadron Australian Flying Corps, in France during 1918. The song was performed by all members of the Kookaburras Concert Party with the lead identified as Richard Humphery. The officers of D Company, 41st Battalion, also sang this song during a concert aboard the troopship TSS Demosthenes on 1 July 1916. Another possible performance of this song could have been given by the Anzac Coves during a concert at Jubilee Hall, Weymouth, England on Thursday 21 February 1918. During this concert, a group of six people singing together, known as a sextette, performed a song titled 'Smile, smile, smile'.

The song was also popular with soldiers before they embarked and those who were on leave, in both England and Australia. In a letter to his uncle, published in The Swan Express, Edwin William Elder of the 44th Battalion commented on a group of soldiers singing this song at Waterloo Station while they were waiting to return to the Front. The lyrics also featured in a booklet titled "'Butler's Snowball" Songbook' which was intended to raise money for the Trench Comforts Fund and was connected with Lieutenant Colonel Charles P Butler. Inside the front cover, it is quoted 'For use at Camp Fire concerts arranged by Butler's 500 enroute to France via South Australia'.

'Pack up your troubles in your old kit-bag' was a song that remained popular throughout the war, with performances in Australia by community groups and schools. The Girls Who Stayed at Home incorporated the song into a concert given for the entertainment of wounded returned soldiers on 29 November 1916. Miss G Selleck used this song during a theatrical performance to offer advice to two soldiers in the field, played by Miss M Treacy and Miss R Coxon. The lyrics of the song were also used in newspaper articles in Australia during 1917 to boost recruitment numbers. At the end of the war, it was played by the Army Reserve Band at Port Melbourne to welcome home 800 members of the Australian Flying Corps on 16 June 1919.

This song remained popular after the war with those who had served with many references in songbooks, particularly those compiled for reunions. The 34th battalion presented the lyrics of this song in a booklet titled 'Songs we remember', and it also featured in the song book compiled by the 40th Battalion to mark their golden jubilee. Similarly, the 4th and 56th battalions presented the lyrics in the songbook that they produced specifically for a reunion on an unspecified date.